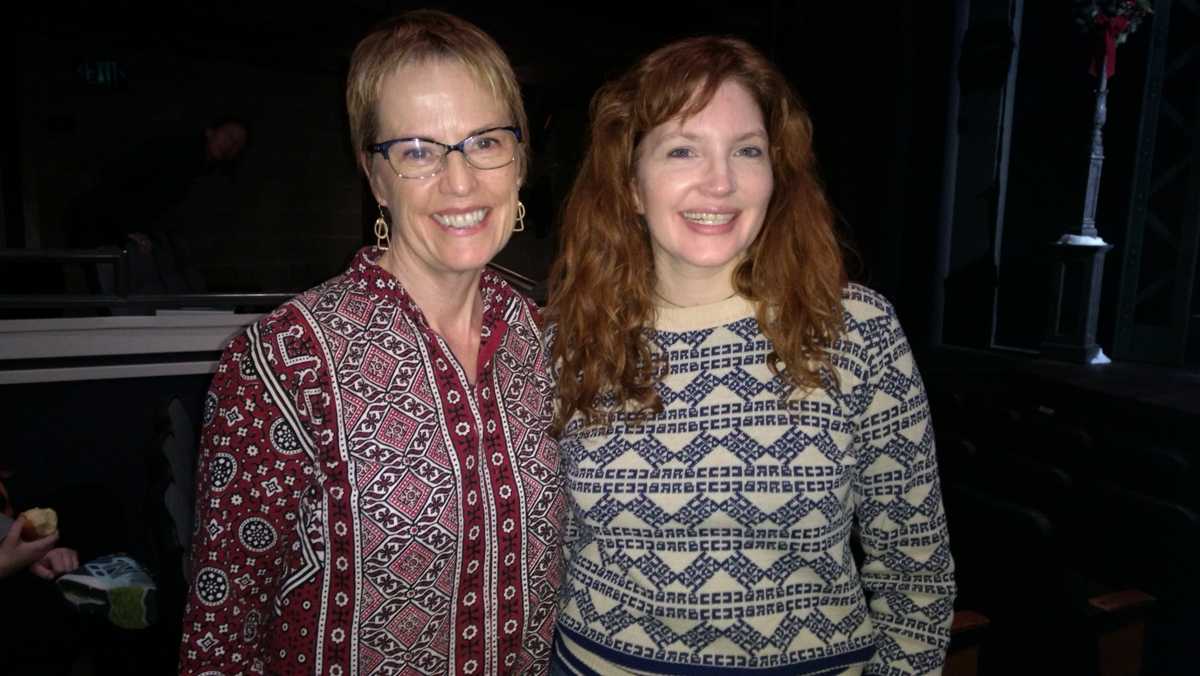 Courtesy of Kathleen Mulligan
Kathleen Mulligan, associate professor in the Department of Theatre Arts, and Maggie-Kate Coleman ’03 worked together on a production of “The Gift of the Magi.” The two has not met before they were hired to work on the production.
By Kara Bowen — Staff Writer
Published: December 12, 2017

Five states, a two-and-a-half hour plane ride and one time zone away, an Ithaca College alum and current professor crossed paths to work on an original musical in Little Rock, Arkansas.

Miller-Stephany told Mulligan he had hired Coleman as the lyricist, but Mulligan did not recognize the name at first. Mulligan mentioned the name to her department chair Catherine Weidner, who recognized Coleman as an alum who had graduated before Mulligan began teaching at the college.

“I had never met her before,” Mulligan said. “Some of my colleagues are friends with her, and they said, ‘Oh, you’re going to love her.’ … She’s really wonderful, and I really enjoyed working with her.”

Once Mulligan and Coleman visited Arkansas to work on the project, they began going out to dinner and discussing their experiences at the college.

“It was one of the greatest accidental joys of this project,” Coleman said. “We had a lot of people in common because a lot of my professors in the theater and English departments are still around, so it was wonderful to get to know her.”

Coleman worked with Hatcher and composer Andrew Cooke to write the musical numbers. After the lines were written, Mulligan trained the actors to accurately reproduce the variety of dialects required by the script.

The musical is based on a short story written by O. Henry in 1905, which tells the story of a poor young couple trying to buy Christmas gifts for each other with little money. Miller-Stephany said that he thinks the story is one of the most beautiful holiday stories but that he did not like the existing written stage versions and thought the Arkansas Repertory Theatre should do its own version. He asked Coleman and other writers to create a one-act musical adaptation that maintained the soft tone of the original story.

“A lot of Christmas shows in particular become this extravaganza where you try to throw everything into it, and we wanted it to really feel small and intimate like the story itself because it’s so beautiful,” Coleman said.

“I think it’s a very delicate piece, and I felt that it should be intimate,” Miller-Stephany said. “My idea was for there to be four actors — Jim and Della, and two actors to play everyone else in their world.”

The couple had to say lines in dialects like Italian, Yiddish, French and working-class Brooklyn accents. Mulligan wrote explanations of sound changes and sent audio samples to the actors online before working with them in person to coach the actors and actresses on the different dialects.

“Sometimes these actors have one line to establish a character, so it had to be so specific and also so different from the last thing they did,” Mulligan said.

Usually, the time between writing and staging original musicals can take up to five years, Coleman said. She said that in this instance, there was less than a year between beginning discussion about the play and staging it. The team wrote the scenes first, then placed songs in the narrative and developed the musical elements.

“I felt confident that we could come up with something very special because the writing team was very focused and very clever and hardworking, and the source material itself was compact,” Miller-Stephany said.

The team did most of their collaborating remotely, communicating over email to discuss the process of putting the production together.

The writing team was commissioned by the theater, and the artists were picked by the theater rather than organizing among themselves. Coleman said the group she was placed to work with meshed together well. She said they were able to overcome challenges of working remotely and creating the production in a short period of time.

“I lucked out,” Coleman said. “They were just a dream to work with, especially considering the challenging circumstances.”

“The Gift of the Magi” runs at the Arkansas Repertory Theater in Little Rock from Nov. 29 through Dec. 24.

Ithaca College Theatre is embracing the holiday season with performances of the Alfred Uhry holiday comedy “The Last Night of Ballyhoo.” Though it already deals with serious issues, this production bears extra weight as it marks the final production directed by Arno Selco, a professor in the Department of Theatre Arts, who is retiring this…