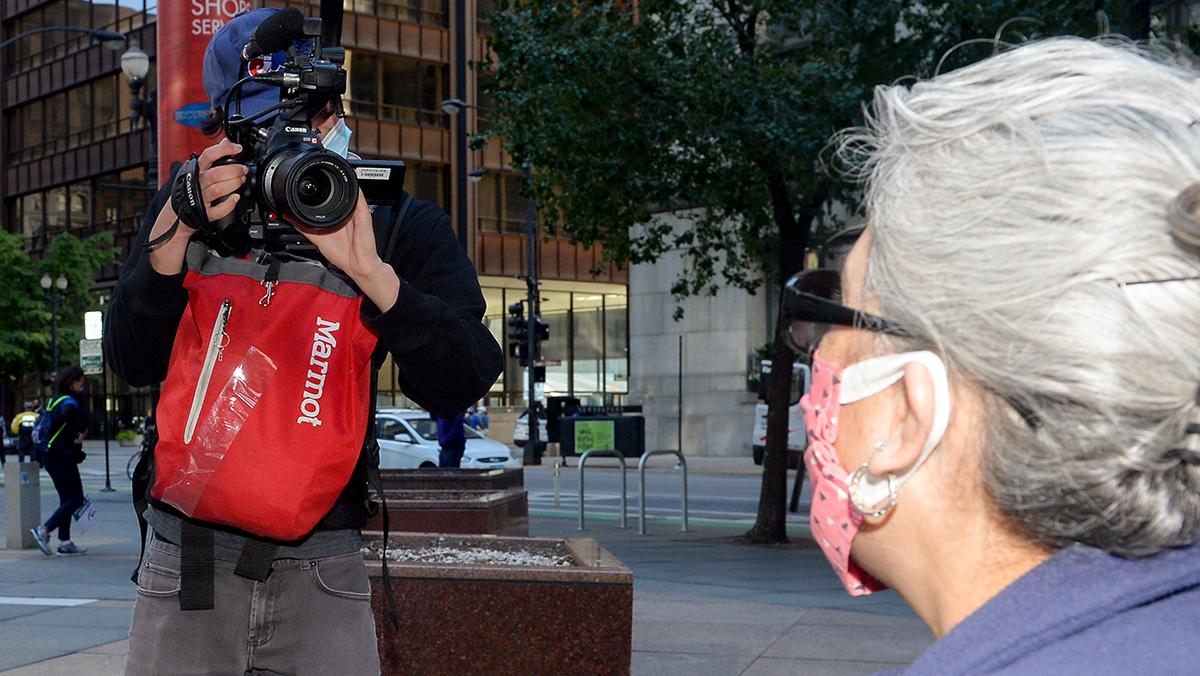 When the COVID-19 pandemic began, Ben Basem ’21 did not expect to emerge from it as an award-nominated filmmaker. However, when Basem was sent home in March 2020, he began to film the experience that his mother had as a nurse in a Chicago hospital. Now, hundreds of hours of footage and a year and a half later, Basem and his crew are bringing their half-hour experimental documentary called “Conversations Between Shifts” to festivals.

“Conversations Between Shifts” is an official selection at the Workers Unite Film Festival, which will take place from 7 to 9 p.m. Oct. 14, 2021 at the Cinema Village Theater in New York City. Tickets are $9. The film was shown at Brooklyn’s The Living Gallery as a part of the Cities of Peace Illuminated’s Breathing Project in September. The film was also a semifinalist at the Flickers’ Rhode Island International Film Festival, which is an Academy Award–qualifying festival. The film has been selected at the International Puerto Rican Heritage Film Festival and also received $6,000 across two Pendleton grants.

Basem said a few weeks into the COVID-19 pandemic, he was inspired to start filming when he saw the public playground in his backyard get taped off with caution tape.

Basem kept filming the life of his mother, even using additional footage that she filmed at her shifts inside the hospital. The long shifts, lack of personal protective equipment and emotions surrounding death and fear — a universal experience of nurses during the pandemic — are all depicted in the documentary. Basem’s mother is shown at the Illinois Nurses Association strike, giving the documentary a personal and national perspective. Basem said after filming from March 2020 to February 2021, he ended up with about 500 hours of footage and decided to use it as his thesis film. Basem said he was able to finance the film through unemployment checks that he received after he lost his job in the recession.

“In March 2020 I was employed at Ithaca College,” Basem said. “I was tuning pianos as a piano technician in Whalen. When we were sent back, I was unemployed, so I applied for New York state unemployment, and I was approved. I was getting checks every week in the mail, and I was using those checks to fund my movie. We didn’t have any grant money at the time, nothing.”

Eventually, Basem was able to hire Yeshim Kayim-Yanko ’21 as an one of the editors on the film. Kayim-Yanko said when the editors began working on the project on campus in Spring 2021, they had to form a pod to keep one another safe from COVID-19.

“We actually did edit together,” Kayim-Yanko said. “It was very safe. We did it all together wearing masks, and we all got vaccinated pretty quickly. … Basically the first whole month of being on this project was just sifting through footage. … We basically just sat together, and I edited and Ben told me some things he wanted.”

Kayim-Yanko said Basem’s vision for the film was that it would stray from traditional documentary styles and instead lean into being an experimental film. This gave Kayim-Yanko the opportunity to create dream-like sequences in the beginning and end of the film to further its themes.

“Pretty much from the beginning, Ben made sure that we knew that he didn’t want it to be just like any old documentary where there’s a narrator and you have interviews and they show some images,” Kayim-Yanko said. “He was very clear that he wanted it to be an experimental documentary, so we went into it with that attitude.”

Senior Zeyneb Henderson was the story director for the film and lives with Gracie Neagoy ’21, the sound editor for the film. In February 2021, they lived and quarantined together in the Garden Apartments while working on the film. During the piecing together of the film, Henderson said being able to see the film as a whole was a crucial role that she had to fill.

“I am an integrated marketing communications major,” Henderson said. “So my specialty is taking one large image or one big idea and being able to boil it down into two sentences so people can actually see what’s going on.”

Because the documentary is experimental, there was room for Neagoy to try new things with audio, like asynchronous sequences that mix video of open Midwestern cornfields and audio of the inside of the hospital.

“There were certain parts of the film we knew within the story needed to be more audio-based and the story was being told with sound,” Neagoy said. “There are other parts of the story that were told through the picture. So, there were some parts that we started [with] sound first and then they cut the video to it. … The process was so much fun, and we put our heart and soul into it.”

Jeanette Alvarez-Basem, the subject of the film and Basem’s mother, said when Basem began filming she was concerned with what she was saying on camera. However, Alvarez-Basem said as the emotions of the pandemic heightened, truth began to pour out on screen.

Alvarez-Basem said her first reaction to the film was feeling proud of her son for portraying the pandemic in such an authentic way. She hopes the film will be a reminder of the loss essential workers went through as well as a beacon of hope for the future.

“I hope that through this film people realize the aberration this pandemic of COVID-19 is and the hope that you can have now that we didn’t have before by getting vaccinated,” Alvarez-Basem said. “Back then we didn’t have a vaccine —we just had a pandemic. And we lost so many. But to lose that same amount because [the unvaccinated] people do not believe that there is hope … I hope that if and when they watch this film they may reconsider the true hope that a vaccine can give because we didn’t have it back then. There was no hope back then. There is now.”