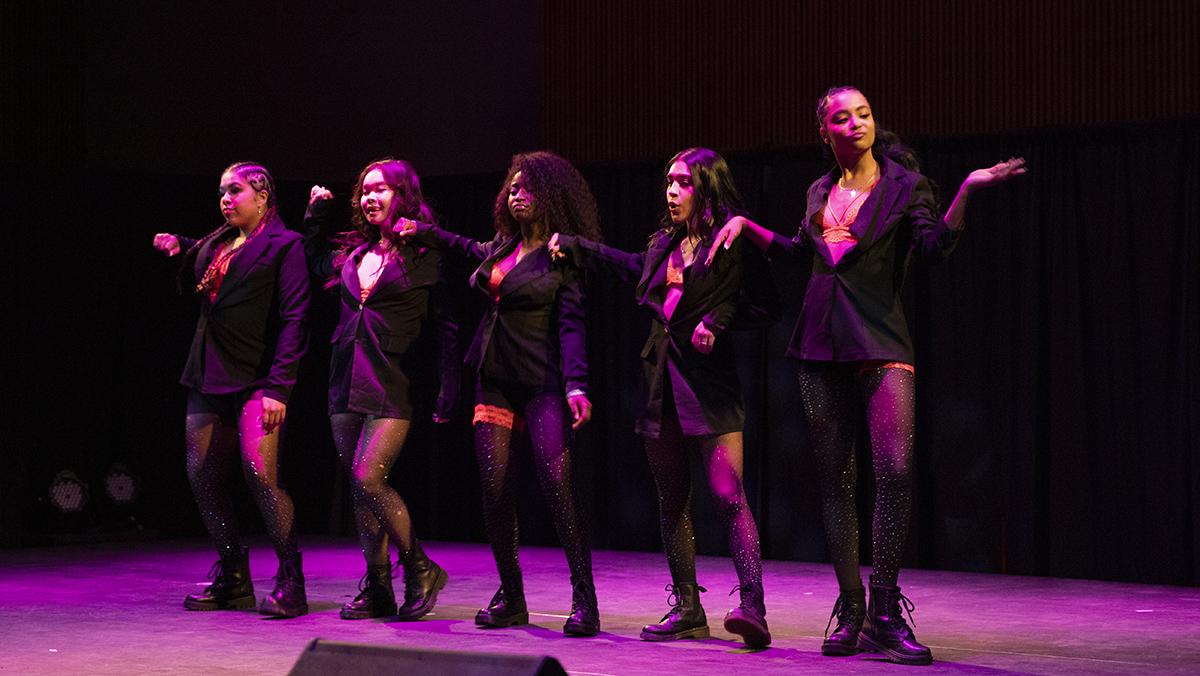 Xiaoyi Zhang/The Ithacan
On April 30, The Island Fusion Dance Team held its end of the year showcase "Escape to the Islands" in Emerson Suites with various styles of dance.
By Mike Ross — Life and Culture Editor
Published: May 5, 2022

Crystal-clear waters reveal a group of friends enjoying a sunny paradise. From the tranquility comes scenes of intensity and drama as the same friends fight one another. The cinematic trailer for “Escape to the Islands” has already been seen by 1,155 people online, and as the trailer’s music boomed across the Emerson Suites, the wait for the showcase was over.

Island Fusion Dance Team held its annual showcase “Escape to the Islands” April 30. The group performed 20 originally-choreographed dance numbers it had practiced throughout the year. Island Fusion Dance Team, which was founded in 2014, is Ithaca College’s first and only Afro-Caribbean dance team. Despite the focus on Afro-Caribbean music, the group also performs hip-hop and Spanish dances.

Senior Malaika Dacelus is a current co-president of Island Fusion alongside senior Ariagnna Abreu-Garcia. Despite having joined the team during the second semester of her freshman year, Dacelus never had the opportunity to perform in a showcase her freshman year. In 2019, Dacelus’s sophomore and junior showcases were all canceled because of COVID-19, making “Escape to the Islands” her very first.

Dacelus said her initial interest in joining the group stemmed from watching her friends perform, as well as her history as a cheerleader in high school.

“I had a couple of friends on the team in Fall 2018, so I went to their showcase and absolutely loved the show,” Dacelus said. “They had great energy, and their moves were incredible to watch. I regretted not joining the team that semester.”

While the group’s co-presidents led and oversaw preparations and performance ideas for the show, “Escape to the Islands” was choreographed by multiple members of the team’s executive board.

“Along with being co-president, I’m also the official choreographer of Island Fusion,” Dacelus said. “Being a senior, I didn’t have time to make all of the dances we had. Luckily, my [executive board] was great enough to choreograph dances with the songs they pitched, which I really appreciate.”

Sophomore Nour Elshikh said he had the opportunity to choreograph a hip hop style dance number for the showcase to Kendrick Lamar’s 2012 hit “m.A.A.d city.” The performance was the show’s opener, and saw two teams of dancers challenging one another, reminiscent of the first “Escape to the Islands” trailer.

“Choreographing ‘m.A.A.d City’ has to be one of the hardest things I’ve ever done,” Elshikh said. “Even though I was inspired while making the dance, I ended up stuck at some points and didn’t know what to do. I have choreographed before, but not to this extent where I would perform the dance in front of a large audience. I’m just glad everything turned out great.”

“Escape to the Islands” was performed in order of genre, split up by guest performances and a 15-minute intermission. The genre sections of the show included hip-hop, Caribbean, Spanish and afrobeat, as well as a “sexy” section which used songs of different genres. Guest performances included many of the campus’ performance groups like Ithacapella, Premium Blend, Katalyst and others.

Ithaca College junior Shevori Gene and Cornell University senior Jair Myree hosted the event. The two hosts engaged the crowd with skits and fun facts about the team members between acts, introducing each section of the showcase and guest performer.

Dacelus said that Island Fusion had practice for three to four hours a day for 14 days straight leading up to the night of the showcase.

“Finally being able to share what we have been working on was very bittersweet for me,” Dacelus said. “Island Fusion has been through so much this year, but we all pushed through and our end product is so amazing and creative.”

Sophomore Viviana Morales said she joined Island Fusion in February 2022 after being persuaded by friends who were already on the team. She said being a part of the team quickly became an exciting way for her to ease the tension of her student life.

“Joining Island Fusion helped me escape from the stress of classes and bond with people who might feel the same,” Morales said. “It helped me reach a side of myself that I never thought was within my limits. Being a part of the team this year was really eye opening.”

As promotion for the event, Island Fusion posted three short trailers on its Instagram account. The trailers set up a cohesive plot that continues into the showcase, in which a group of prisoners and police officers connect through dance and, as the show’s title suggests, flee to an island paradise.

“Our team manager Jaevon Williams thought of a prison break theme, we went with that and put an Island Fusion twist on it,” Dacelus said. “Our [executive board] was the cops and our dancers were the prisoners.”

Elshikh said the show’s theme stemmed from a change in perspective which led team members to prioritize their ideas, regardless of the critical opinions of others.

“At first, we wanted to come up with an idea that could really make a name for ourselves,” Elshikh said. “We later realized that we shouldn’t worry about others and that we should focus on ourselves and what we want to represent. Escaping to the islands shows people we’re focused on getting to our roots and freeing ourselves from the prison of what others think we should be.”

Island Fusion reached out to content producer junior Steven Howard Jr. about creating the videos for the team.

After agreeing to produce the trailers, Howard said he met with the team to discuss their ideas and intentions in person. According to Howard, Island Fusion worked very efficiently on the trailers and paid great attention to detail in order to bring their theme to life, which helped the team complete all of the filming swiftly.

“We started working on the trailers on April 1, it was a two-day process,” Elshikh said. “It was nice, we had to push through the cold, but we were able to complete the scenes in a total of five to six hours.”

While the group has been working toward the showcase for months, the year isn’t over for them yet. Island Fusion will be making a guest appearance at the Katalyst K-Pop dance group’s showcase May 6.

“I’m so proud of all the hard work that was put into each dance and all of the energy each dancer came with,” Morales said. “I think ‘Escape to the Islands’ really captured what Island Fusion is all about.”