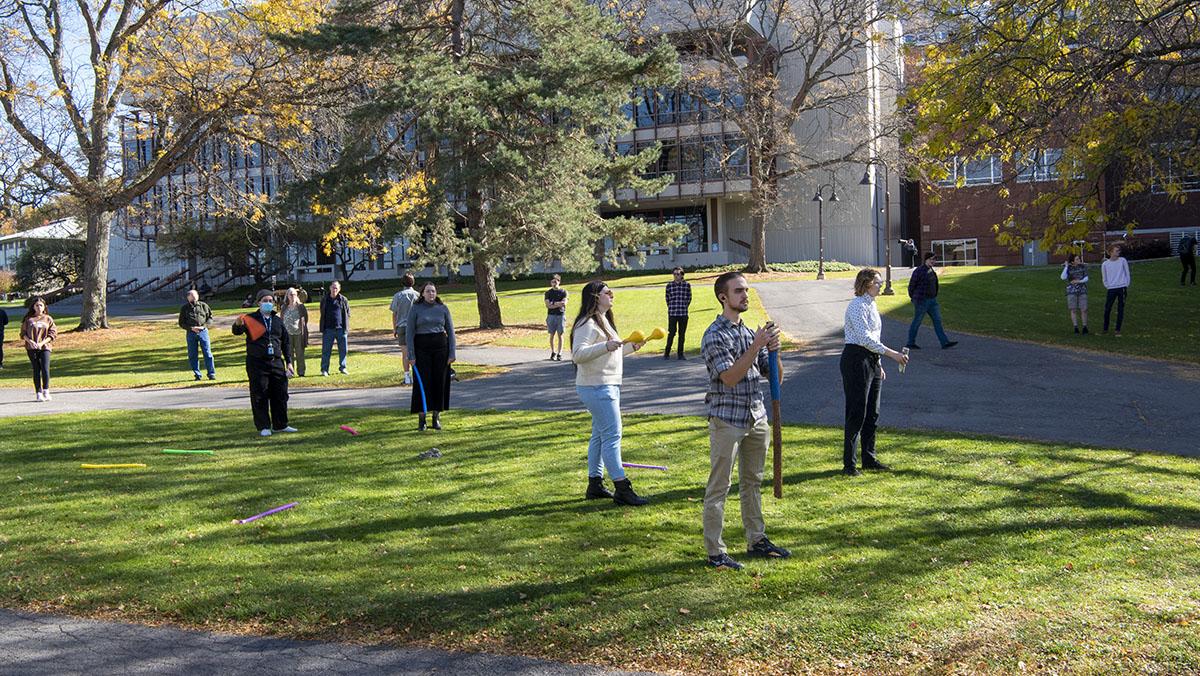 As the sun beamed down on an unusually warm fall afternoon, a group of musicians spread out across the Ithaca College campus. Nature is slowly drowned out by the wistful sound of drums, gongs and other percussion instruments as groups of students and families carefully take in their new surroundings.

Stretching from Campus Center to the Dillingham Fountains, the 20-person Ithaca College Percussion Ensemble put on a performance of John Luther Adams’ “Inuksuit” on Oct. 22, a piece originally composed in 2009. The piece is intended to be performed outside in nature with anywhere between nine and 99 musicians. According to Adams’ composer note, when translated from Inuktitut, the word Inuksuit means to “act in the capacity of the human.” Adams also mentions in his composer note that he was inspired to compose “Inuksuit” by the stone sentinels built by the Inuit in the Arctic, with the piece being about the melting of the polar ice caps and rising water levels. 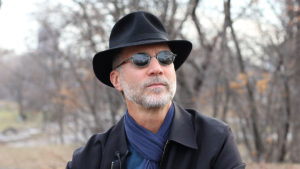 Performers were divided into three groups that began next to the Textor Ball enveloped by silence, before moving to their different spots on campus and playing their instruments, taking over the natural sounds of the environment. The first group had sounds involving performers having to breathe into instruments like conch shells and bull horns, the second group had many drums and loud impact noises and the third group had metal sounds like glockenspiels and cymbals.

Mike Truesdell, assistant professor in the Department of Music Performance, has been coaching the percussion ensemble leading up to their performance since the beginning of the semester. Truesdell said that he chose “Inuksuit” because of how impactful it is, both for the performers and the audience.

“The audience members have a chance to connect with you on a much more personal level than they would in a traditional concert setting because they have the ability to choose their proximity to you,” Truesdell said. “If somebody feels like they want to move and get a different perspective, they get a completely different sound world.”

Junior Phil Cataldo was one of the percussionists who performed in group two. Cataldo said that the piece used pretty much every tom drum and cymbal that the James J. Whalen Center for Music has.

“It’s obviously a logistical and equipmental challenge to get everything that we needed for this piece,” Cataldo said. “We really only had a couple rehearsals where we were able to rehearse with every piece of equipment.”

The performance of “Inuksuit” required performers to listen to one another closely to keep on track because there was no conductor, but no two performances of the same piece will sound exactly the same. Senior Michael Avanessian said that “Inuksuit” was the first piece he has ever performed outside during his time at the college, and that the spontaneity and feeling of the performance was unique.

“Having performances that are alive adds to [the experience],” Avanessian said. “It lets you socially distance in a post-COVID era while also having the opportunity for audience members to gain different views of performance than you would in the static nests of a recording or in a concert hall.”

At the end of the performance, Truesdell said that the piece gradually returns to the sounds of the natural environment as performers slowly move back to where they once started.

“We reach a peak of textural and dynamic density,” Truesdell said. “It starts to thin out and soften, and eventually we come down to a place where it’s just left with a few playing birdsongs on the glockenspiel.”

Percussion has been a growing field since the 20th century, with traditional instruments beginning to play a basic part in popular music. Cataldo said that percussion’s practice and repertoire in music performances are relatively young compared to older instruments, like the violin, that have been around for much longer.

Anna Young ’22, who participated in the percussion studio, heard about the performance from word of mouth.

“The concert was pretty wild,” Young said. “You felt a little sound bath going on. It was super cool to see all of these eclectic pieces come out of Ford [Hall] into a bigger space.”

Having the music be performed outside on a sunny day added to the experience, Young said.

“First you get the scenery, the fresh air,” Young said. “And you get just the different echoes of the sounds and the different things being added to it, being in an uncontrolled space.”

Senior Jack Goodenough said he had not heard about the concert until the day of and decided to bring a group of friends and enjoy the music.

“I wasn’t quite sure what I was going to listen to today,” Goodenough said. “But I didn’t envision just sort of like a walking tour. You can move at your own pace, even chit chat.”

Goodenough said that having the live performance was important because the event brought so many people together: not just the percussion studio and the performers, but many students cheering them on.

“It’s interesting to see a lot of the non-musicians walk around,” Goodenough said. “Some people were stunned, a little perplexed, not sure what was going on. But we saw multiple people walking back and forth. It’s really cool that this is a community event.”

Review: The 1975 is not afraid to be controversial