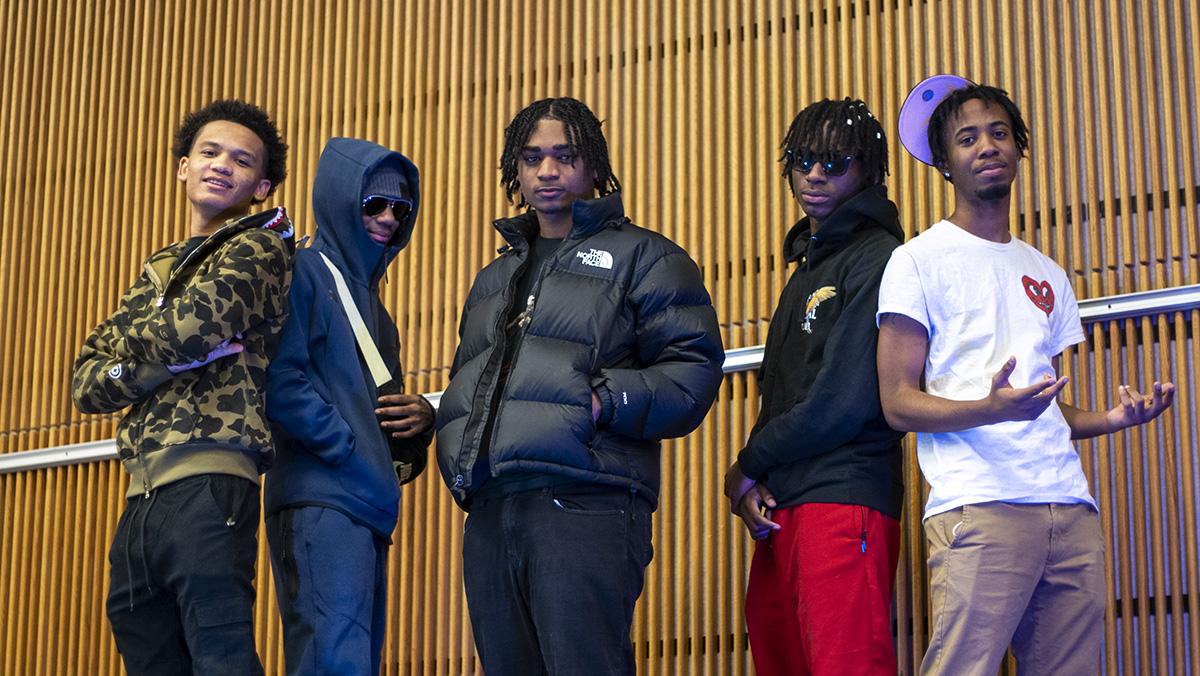 Glaring into a crowd of high-energy spectators, junior Jordan Alexander remembers his humble beginnings. In just two years, he’s made it from recording in his bedroom to performing his first show at a group of students’ apartment. Though he’s been working hard on his music for nearly two years, for Alexander, known on stage as J.R.A, this eccentric performance is only the beginning.

Hip-hop is the second most popular genre of music behind pop. While rap music was once difficult to produce and publish, the availability of the internet in the early 2000s and the rise of social media gave lesser-known rappers and producers a platform to share their work on. MySpace’s rap scene is credited for finding and popularizing artists like Drake, and Tumblr was a popular early destination for collectives like Odd Future and Brockhampton. Since then, SoundCloud has been the go-to destination for artists looking for quick and easy publication, and the frequency and simplicity of making music and uploading it to SoundCloud has developed an entire subculture of “SoundCloud rap.”

SoundCloud rap gained a name after smaller artists who published their music on the platform found household fame around 2015. The success of artists like Lil Pump and XXXTentacion drove young listeners to make music exclusively on their laptops and phones, creating the underground scene which SoundCloud rap usually refers to. SoundCloud rap is a unique and revolutionary step in hip-hop history, as it transformed even the smallest of towns and schools around the world into talent goldmines. Ithaca is no different.

Alexander has been involved with the college’s hip-hop community for nearly two years. While rap often surrounds a competitive culture, Alexander says the music scene on campus is more positive and collaborative. Artists come together to network, which is their primary mode of growth. This helped Alexander get the opportunity to hold his first performance Dec. 3, 2021.

“The opportunity came up because I had a mutual friend who also made music and had friends who were in a band,” Alexander said. “So he had an idea for an end of the year get-together where people could hang out and perform.”

Alexander credits the college’s friendly music scene to the shared goals and aspirations of college students, meeting his friends who make music through his work as a TVR major in the Park School. Students who make music take classes and work hard alongside their passions, putting performers on a similar level and giving them all something in common.

“We’re all trying to make the best film, or show, or article, or get the highest grades. I feel more competitiveness in the classroom than I do in music,” Alexander said.

Despite his respect and dedication to the underground hip-hop community, Alexander doesn’t identify as a SoundCloud rapper. Since the term’s creation, artists labeled as SoundCloud rappers have gained a reputation of poor quality, mostly due to the high volume of content on SoundCloud making it difficult for listeners to filter out the music they prefer. Without associating with the trope,  Alexander does recognize the reasons most rappers get disregarded based on where their music is being published and finds the blind criticism to be harsh given the circumstances.

KBN (Kings by Nature) is a group consisting of freshmen Brian Martinez, RJ Dixon, Omari Matthis, David Simmons and D’Andre Walker. The group originally made music for its own entertainment in November 2021, rapping over a drill beat in Simmons’ dorm. After playing its music for a few other on-campus artists, the group received enough positive feedback to pursue music seriously. KBN takes a different stance on the idea of the SoundCloud rap scene.

The artists’ come-up after positive feedback by other creators is another example of the overwhelmingly supportive rap community that exists on campus. In both Alexander and KBN’s cases, the active and enthusiastic community is what helped their music grow.

“Everyone wants to see each other win,” Simmons said. “I haven’t seen anyone talking down on anyone’s music or being disrespectful. Especially the upperclassmen, they’ve been really supportive.”

Despite the positive experiences of Alexander and KBN, Ithaca College’s hip-hop scene remains underground. Sophomore Nour Elshikh, also known by his stage name DJ Pharaoh, finds that despite the number of rappers and producers on campus, the subculture doesn’t receive too much attention.

“I know and have met so many people who produce and make music, though it’s definitely not mainstream yet.” Elshikh said. “I’d still say it’s somewhat popular throughout the school, it seems like more incoming freshmen are interested in making music.”

Part of the school’s rap scene staying underground might stem from the lack of student rappers enrolled at the School of Music. Vadim Serebryany, associate professor of music production, said that hip-hop’s influence in music curricula is not only present but gaining more attention.

“Hip-hop gets discussed in a variety of places in the curriculum,” Serebryany said. “It comes up in Rock Styles, in Tim Johnson’s seminar on Hamilton, and in other courses I’m sure. I am not aware of any students for whom the creation of hip-hop is a central part of their academic work at this moment, but discussion about making ‘laptop’ an option for principal instrument for an IC music major are ongoing, and I wouldn’t be surprised if a program along those lines gets added in the near future.”

More students enrolled at the music school could mean more hip-hop centered events on campus. Elshikh was able to participate in a DJ set opening for Brooklyn rapper Sleepy Hallow at the Bureau of Concerts Fall 2021 event, though other official hip-hop events at the college are hard to come across.

“I think the community should be more expressed through on-campus events because there’s actually a lot of students who are really passionate about their rapping and producing,” Elshikh said. “I want to see more interaction between groups and artists in the school’s rap scene, I think it’ll bring a lot of people together.”