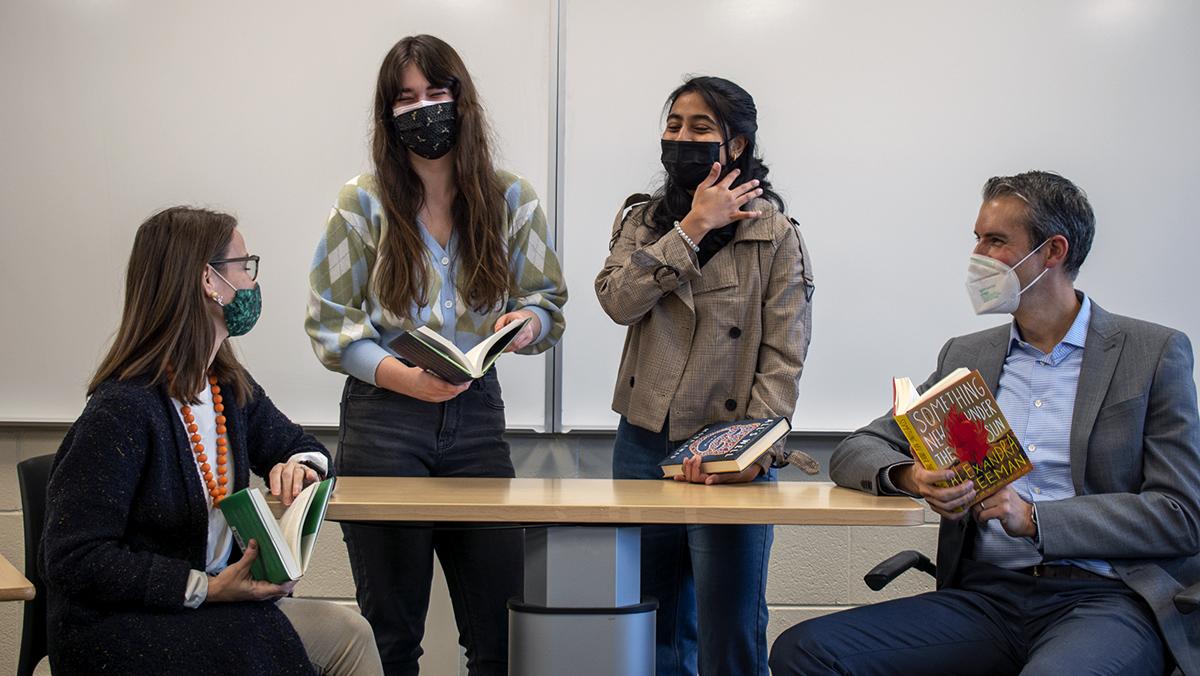 After two years of holding Ithaca College’s New Voices Festival strictly online, the organizers are hoping to hold this year’s festival in person with a virtual element, for the 10th anniversary of the festival.

The festival was created in 2013 by Chris Holmes, chair and associate professor of the Department of Literatures in English at Ithaca College, and Eleanor Henderson, chair and associate professor of the Department of Writing at Ithaca College, with the purpose of connecting students with up-and-coming writers. With the seminar being added during the sixth year of the festival, student guides take a two-credit reading course that familiarizes them with the work of the authors along with a one-credit development course that helps them with planning and executing the festival.

This year, the festival will take place from April 27 to 29. The invited authors include Mona Awad, Alexandra Kleeman, Gina Nut, Lauren Oyler, Jenn Shapland, poet Maya Phillips and playwright Liza Birkenmeier. The festival typically includes seven-minute readings by seven authors called the “Short Short” at Buffalo Street Books, and will feature a staged reading of a play by visiting playwright Birkenmeier at the Cherry Artspace.

Holmes said that student guides in the New Voices Seminar read the works of one visiting author assigned to them. Each student guide then writes an introduction to be read aloud when announcing their author at the festival.

“[The student guides] have read the works of that author, and are very invested in that author’s work.” Holmes said. “By the time that author shows up on campus, they know more about that author than 99.99% of people living on the planet.”

Holmes said that the festival has had to make do with a cut budget over the last few years because of the college’s economic hardships.

“The festival has become a real fixture of the year that a lot of people look forward to every April,” Holmes said. “I really, really hope that we’ll be able to return to a fully funded festival.”

Henderson said that students are involved at every level of the festival from student directors to the student guides.

“It’s a unique experience because students get to be involved in a really rich literary discussion of texts,” Henderson said. “They also get to be behind the scenes planning what this pretty big, significant literary event is going to look like.”

Another opportunity that the writing department offers for students is the Distinguished Visiting Series, which invites writers at later stages of their careers for students to hear readings and take masterclasses with. The New Voices Festival also brings writers together to talk about their experiences, but instead invites debut writers who are not that much further along than students.

Junior Abby McGuire, assistant student director of the New Voices Festival, said the New Voices Seminar is a fun and exciting time where students are able to read new works and discover new authors together.

“I’ll be helping [the student guides] get comfortable with the material and… with their position in the festival,” McGuire said. “So that once we get to that weekend in April, everybody feels prepared.”

“The guides don’t have to all be writing majors or English majors, we have a lot of people from different schools who are just genuinely really curious to read new work,” McGuire said. “We all get to sort of come together and we bring different perspectives.”

Junior Amulya Ravitej Bachala, student director of the New Voices Festival, said that she loves the atmosphere of the festival due to all of the different types of writing that students can enjoy.

“If you want to go to the festival, you can read whichever [genre] you like,” Bachala said. “I feel it’s perfect for literature nerds.”

Bachala said the class that student guides must take is a lot like a regular literature class with the added aspect of festival planning. Students read and analyze the work of the authors alongside planning and organizing the festival to make sure everything runs smoothly.

Bachala said she has always wanted to write, but after meeting the authors through the seminar and festival, has started to realize exactly what it takes.

“There’s something really different about when you actually meet the person who wrote those words,” Bachala said. “That’s a very educating experience.”

By Former Faculty Members and Administrators of the School of Music | Feb 3, 2022