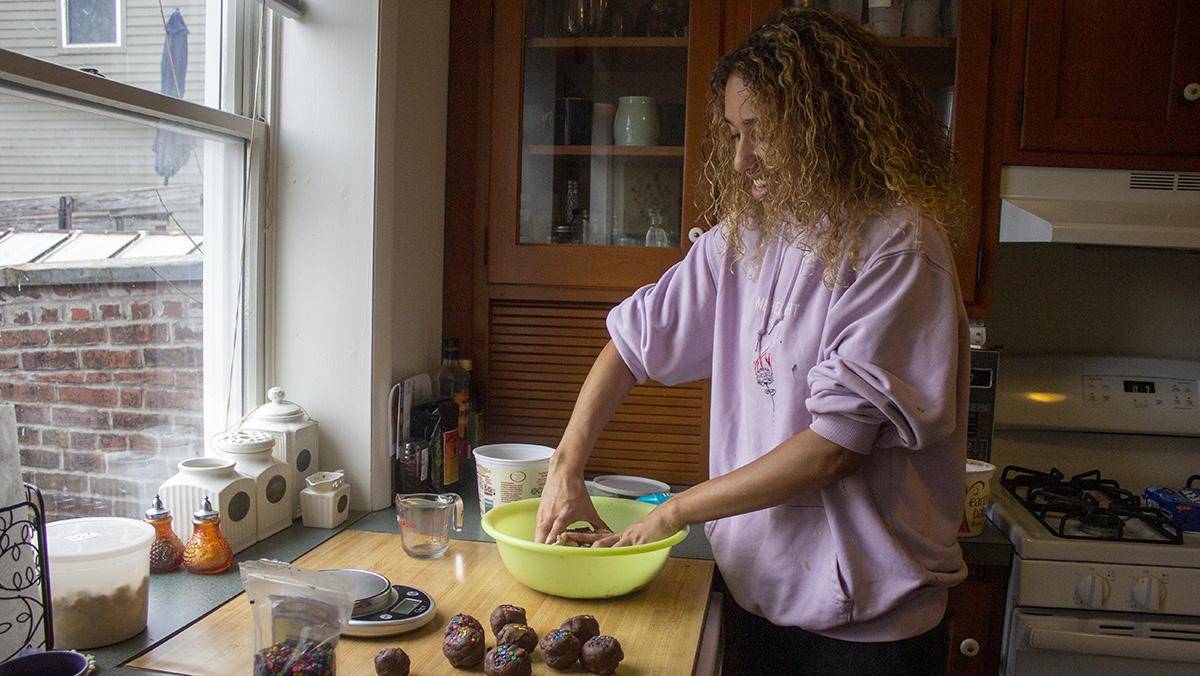 Lexi Danielson/The Ithacan
Via's cookies is a local business run by an IC senior that donates portions of its profits to students in need.
By Sarah Marsh — Staff Writer
Published: October 27, 2021

Dotted across Tompkins County, in Greenstar, at the Ithaca Bakery and at the Trumansburg Farmers Market, are perfectly packaged cookies with a purpose. From classic chocolate chip to snickerdoodle to the rainbow-dotted galactic fudge, Via’s Cookies line store shelves as passersby go about their daily shopping.

Starting as a homegrown, high school business venture, Via’s Cookies is an independently-run cookie business owned and operated by Ithaca College senior Olivia Carpenter. Offering a wide range of cookies with traditional ingredients, Carpenter also specializes in vegan and gluten-free recipes as well. Carpenter has won multiple awards for her cookies and business plan, and is currently selling both in stores around Ithaca and through her website. These cookies, which are available at $2 per individual cookie or case by case for bulk orders. In addition to providing a diverse array of flavors and ingredients, they are also sold with a purpose. Every month, Carpenter chooses a New York-based college student to fundraise for, spotlighting them in a section on her website where she describes their background and the cause for fundraising. Carpenter donates 5% of her proceeds to a different individual every month, with an emphasis on Black, Indigenous, People of Color (POC) and LGBTQ+ students in need.

“I originally started selling them back [in high school],” Carpenter said. “I actually found a lot of success. I mastered the recipe. It’s something I’ve made myself perfect and people absolutely love it. They think these cookies are amazing.”

Eventually, after selling cookies at her high school for some time, Carpenter said her school informed her she would no longer be allowed to sell them on campus.

“I had so much success that the school was like, ‘You can’t sell this here, you’re taking away from our sales,’” Carpenter said. “We can say that was really the case, but also I was like the only Black person at an all-white, country school. Other people were still selling their little goodies. But I wasn’t selling mine.”

After this problem with high school administrators, Carpenter said she found other avenues to continue her business.

“I took it beyond school, I sold to friends outside of school, I sold to my dad’s business clients, I found success elsewhere,” Carpenter said. “You know, nothing could stop me. And basically, I carried that through high school. People knew me for my cookies.”

From its small beginnings in Carpenter’s hometown, Via’s Cookies evolved over time through a major business competition on campus, “IC Demo Day.” A well known event, “IC Demo Day” is put on by the college’s School of Business to provide an open forum for any student to pitch a detailed business idea. Winners and runners- up receive funding that goes directly into the real costs of running a business, like advertising or product materials. After originally not planning to enter, Carpenter said a conversation with her sister discussing her vision for helping students is what inspired her to join the competition.

Carpenter went on to win multiple awards, including both her original proposal of $500, as well as the Crowd Choice Award and the Sustainability Award for a total of $985.

“It’s one of the reasons I’m here at Ithaca College,” Carpenter said. “I’m here because I want to pursue social justice, I want to make change in the world, I want to build up the people around me because as a student of color, I know the struggle. That’s what I include in my pitch because it’s the truth.”

Carpenter’s donations have had a real impact on those both on campus and off. Amaechi Kofoworola was enrolled at the New School in New York from 2020 to early 2021. Kofoworola was a leading figure in the group of BIPOC students that raised concerns regarding a lack of financial aid, and he left the school after those concerns went widely unaddressed by administration.

“I had to leave the school due to the amount of racism and classism within the school that  affected me and a lot of Black students,” Kofoworola said. “I basically had to compile and read 50 to 60 plus messages from BIPOC students who were having the same issues as me and I had to, by myself, post each and every one of them. After that, the school didn’t really do anything to provide any help or compensation.”

Carpenter ended up raising $120 for Kofoworola in Spring 2021, but he decided to share the donation with other students going through the same problems he was facing.

“There were so many people who could have done more, that chose to not do more, and [Carpenter] did do more and I really appreciate that,” Kofoworola said.

Highlighted under the “Support a Friend” tab on the Via’s Cookies website is Yahaira Tarr, a senior at Lehman College. Tarr is a student, artist and community organizer, who started a GoFundMe in order to support their completion of college.

“I met Via when I was a sophomore at Ithaca College,” Tarr said. “Years later after I had transferred out of Ithaca due to financial reasons, Via and I kept in touch over social media and Via offered to promote my GoFundMe with Via’s Cookies.”

After another month of selling, Carpenter raised $90 for Tarr, who is now able to put that money toward

the many expenses that come with college education.

“This was extremely helpful for my GoFundMe goal,” Tarr said. “It felt nice to be recognized and supported.”

Ithaca College Senior Catriona Ferguson said she has known about the business for some time now, and customers keep coming back.

“I first heard about Via’s Cookies from [Carpenter] herself,” Ferguson said. “She is in my scholarship and is a wonderful networker and business woman, so she knows how to get the word out.”

Ferguson said it’s both Carpenter’s cookies and her general attitude toward the business that intrigues people.

“My experience with Via’s Cookies has always been positive,” Ferguson said. “She is kind, easy to talk to and will always help customers and answer questions. Her cookies are well-priced, and of amazing quality. I haven’t tried a cookie of hers that I haven’t liked. Plus, the business also supports BIPOC and LGBTQIA+ students in need. I think that her message and dedication to social justice draws people in, and the quality and delicious taste of the cookies is what keeps people coming back.” 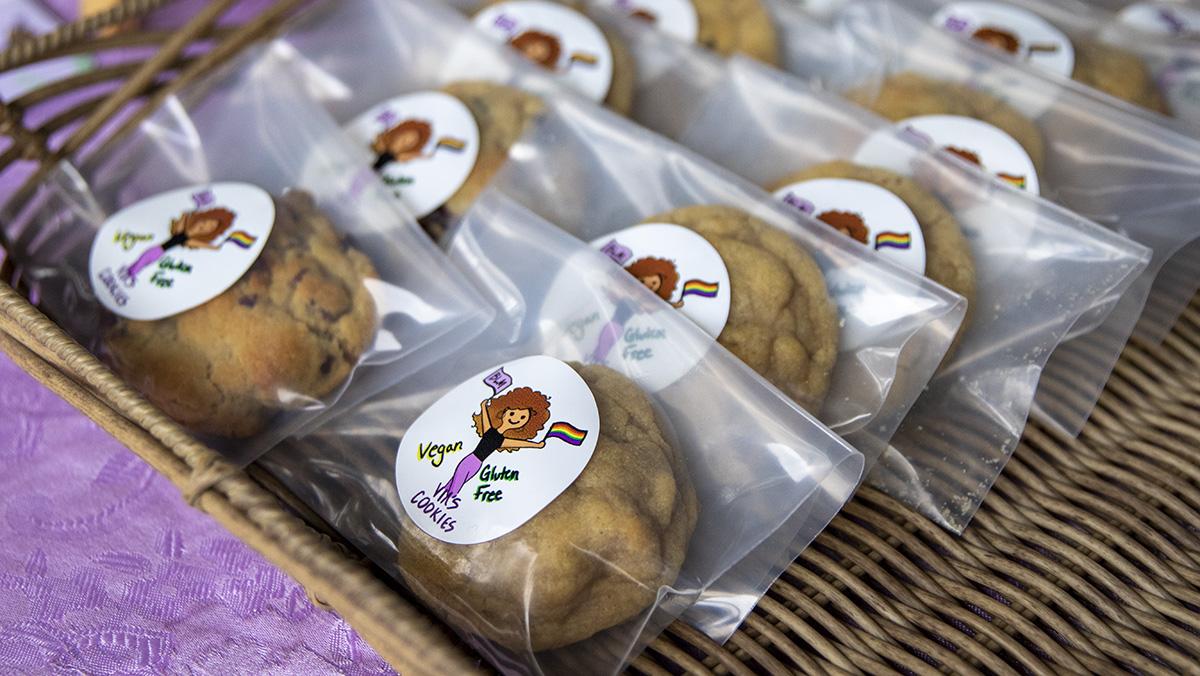 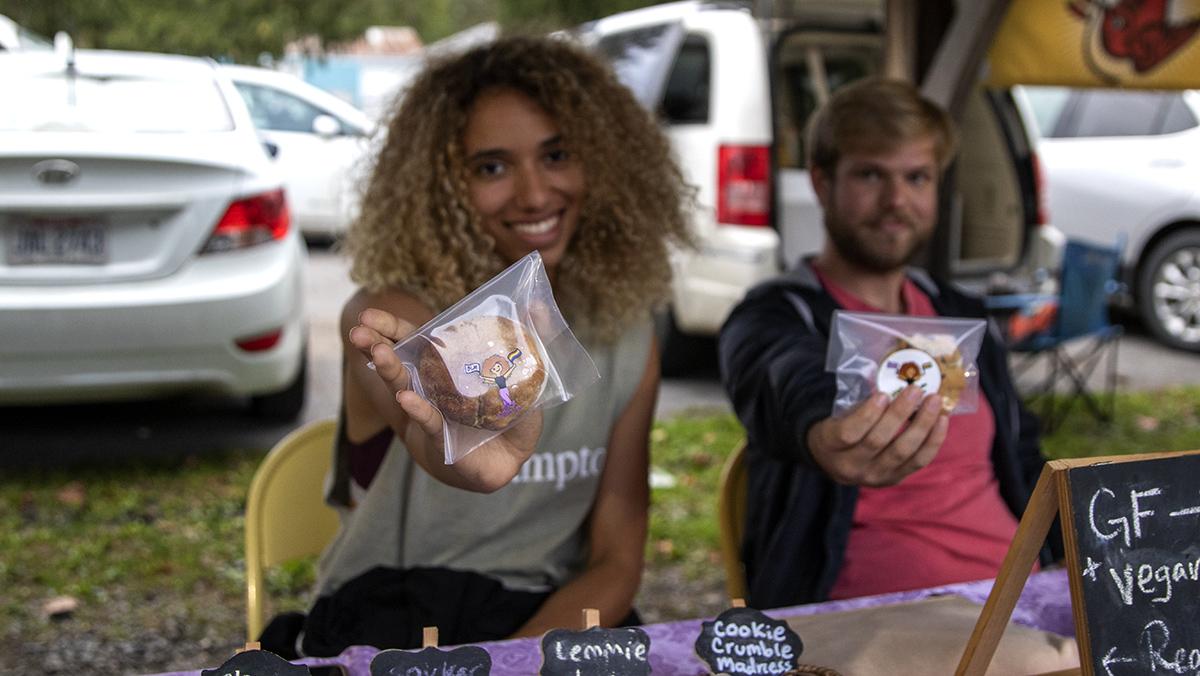 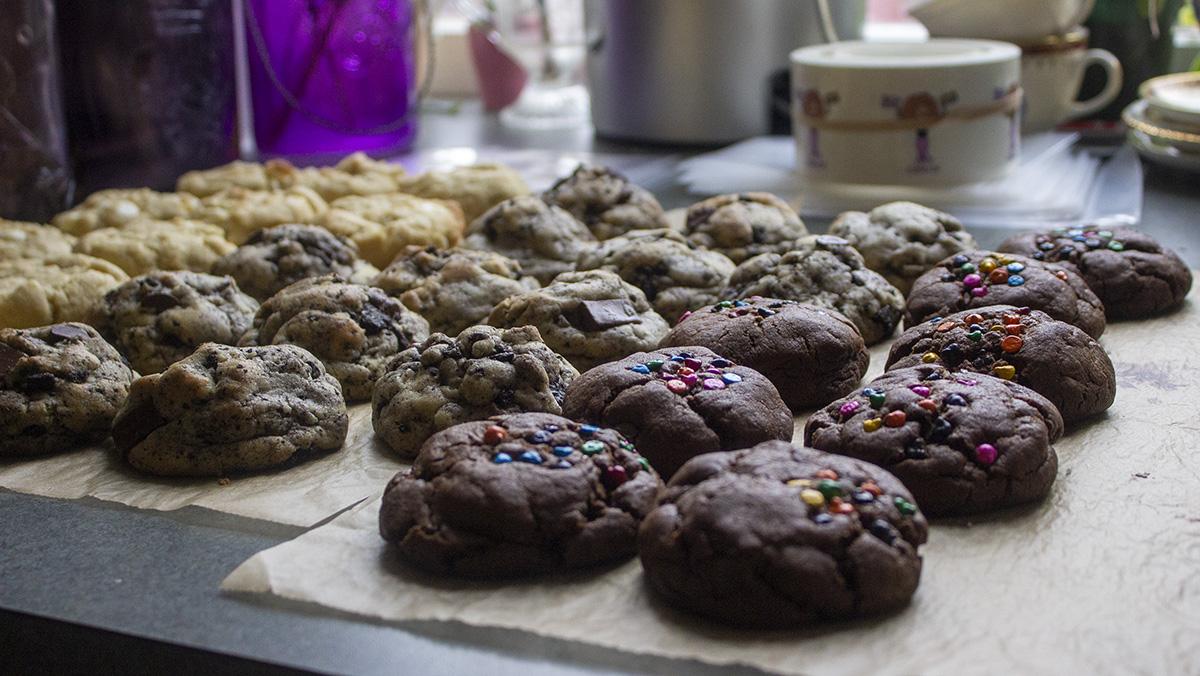