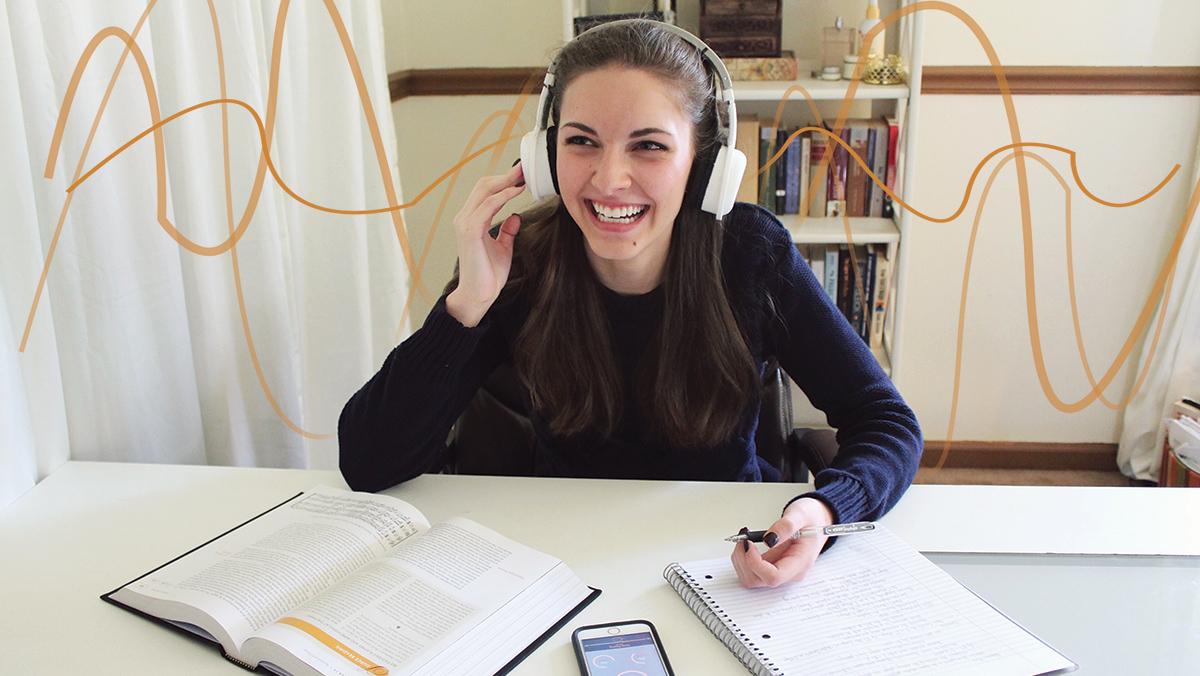 Courtesy of Jessica Voutsinas
Alexandra Voutsinas, Jessica’s sister, poses with a 3-D–printed prototype of Trills — Bluetooth headphones with sensors that interpret a person’s brain waves and emotional state to create recommended playlists. This is one of the product’s promotional photos that can be found on its main website. Voutsinas said she hopes the product will be released within a year.
By Taylor Zambrano — Life & Culture Editor
Published: September 21, 2016

Focus, motivate, uplift and relax. Each of these moods has its own corresponding range of songs and musical tones that affect the brain in different ways.

Ithaca College junior Jessica Voutsinas, along with Alex Patin, a junior at Pennsylvania State University, created a set of headphones that analyzes the relationship between music preferences and these states of mind. Their product, Trills, is Bluetooth headphones that they say can calculate how a person’s motivation or focus is affected based on the music they are listening to. There are electroencephalogram (EEG) sensors located throughout the headphones, which Voutsinas said can calculate a person’s brain waves, and by using a specific algorithm to translate that information, an app that accompanies the headphones creates recommended playlists — using Spotify, Google Play, Deezer and Apple Music — that help optimize a person’s cognitive state.

“Music is the only known phenomenon that activates all aspects of the brain,” Voutsinas said. “It is genuinely something that no one has been able to quite understand. If you’re listening to a piece of music, the region of your brain that is activated by movement will light up even though you’re not necessarily moving. So literally any aspect of the brain can be targeted by music.”

A few months after creating the product last November, Voutsinas and Patin said they decided to build a company around it: Musical Minds. After the paperwork for it was filed in April, and everything was confirmed, Voutsinas said they began bringing other students into the company in June.

The startup now has 30 student neuroscientists, engineers, mathematicians and musicians working together who know each other from either high school or college. Voutsinas said the company’s goal is first and foremost to promote mental health wellness.

While name-brand headphones such as Beats by Dre can sell for anywhere between $100 and $400, Voutsinas said the goal is to cap the price of Trills at about $220, which she said is fairly cheap for the quality of technology that accompanies the headphones — EEG electrodes accompanied by a brainwave processing system.

Trills isn’t the first wearable EEG technology of its kind. Voutsinas said brain–computer interfaces aren’t usually produced in the form of headphones, but instead as headgear that can read brain waves during everyday activity at the cost of having prongs stick out from the back of the head.

“Ours [are] more comfortable and aesthetically appealing because that’s been a huge hurdle with breaking into a consumer market — the fact that they look so weird,” she said. “This is the first one, where we have the EEGs embedded into the headband itself … because when you have wires running along these prongs, the wires move, and it disrupts the signal that you’re receiving. So the fact that you don’t need to connect wires from the EEG to what interprets that data means that the data we’re receiving is more accurate.”

The inspiration behind the product came from a class Voutsinas took during the fall semester of her sophomore year with Elizabeth Simkin, associate professor of music performance, called “Music and Medicine.” In an effort to discover how music impacts the mind, the class visited different types of care centers, such as local hospice care facilities and nursing homes, to sing or play instruments for patients with mental illnesses such as Alzheimer’s disease and dementia.

Simkin said she has seen music have an impact on health while playing bedside in an intensive care unit, as she watched heart rate monitors and oxygenation rates respond to the music she played.

“Jessica’s prototype is so much more specific and so much more detailed and also, I found that I was a little bit divided when I had those machines in the ICU of sort of being tempted to play to the machine a little bit,” she said. “The whole beauty of this work is that you’re able to be working at very intuitive level with the human being that you’re with.”

Voutsinas said the fact that people can respond so strongly to music, when no other stimulus worked, amazed her. When she brought up this revelation to Patin, they came up with the idea for the product together and structured it similarly to a previous project that Patin had worked on.

Patin was involved in music his entire life, playing all sorts of instruments, including clarinet, guitar, trombone and drums, and as a computer science major, he said his personal interest lies in connecting technology to music. 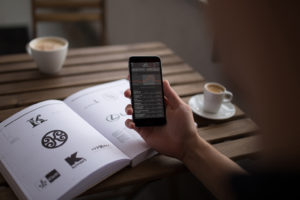 Courtesy of Jessica Voutsinas A prototype for the Trills app is currently underway. Pictured above is what the app could look like when showing users their brain wave data over an extended period.

He said the idea for the product originally began as a hackathon project, which is when computer enthusiasts get together and program over a 24-hour span to come up with a new product.

“It was me and three other kids working at HackPSU on a mobile app that was able to sync up with a Microsoft band — which is sort of like a Fitbit and is able to track your responses to music and try to tailor music to help you exercise and run better,” Patin said. “We sort of pivoted a little bit and started using brain waves to accomplish a sort of similar task.”

Mike Gehrsitz, a junior at Penn State, handles the production of the physical product — right now it’s still in its 3-D printed stage — as well as the technicalities involved in creating the  Trills app. He said there will be both a free app and a paid one. The free app will be more survey-based and will pair the user with someone who owns the headphones and has similar music taste and personality, effectively creating similar playlist recommendations for both parties.

The purchasable app, for a possible price of $3 to $5 per month, would sync up to the headphone users and allow them to see how their wellness levels change over time, Voutsinas said. Both the free and paid app are still in the testing stage.

She said that the product is still in its first phase with employees’ providing the feedback and data. They wear basic headbands with EEG sensors attached and listen to music so the sensors that will be added to the Trills can begin to learn how to interpret brain wave data.

Gehrsitz said he and the rest of the teams are still coming up with ideas about how to visually display the information and translate it into language the average person will understand.

“What we have right now. … is representing a version of the app where it literally reads out the names of the waves, so it’s like Alpha, Beta, Gamma, Theta — that doesn’t mean anything to anyone,” he said. “We are going to try — for the first iteration — to implement a spider graph that will actually show you where you are on the spectrum, like how you’re feeling and how much you pay attention, so you can compare various traits of your mind to [one another].”

Voutsinas said the company’s goal is to begin selling the product to the public and gathering feedback from its consumers within a year.

She said the concept of using music as therapy is important because it can be used to help mitigate the effects of mental-health illnesses, such as depression, anxiety and Post-Traumatic Stress Disorder.

“While industries target the recreational side of music, Musical Minds is targeting the wellness aspect,” Voutsinas said. “We’re actually redefining the end goal of listening to music. You’re not reading a research paper on the theory behind music therapy. It’s actually working in real time, and we show you how it increases your focus, motivation and mood … over time. It’s not something you read about — it’s something you yourself are experiencing.”

Celebrate Porchfest and listen along as local musicians perform on their front porches.

The Head and the Heart’s “Let’s Be Still”: Album Preview