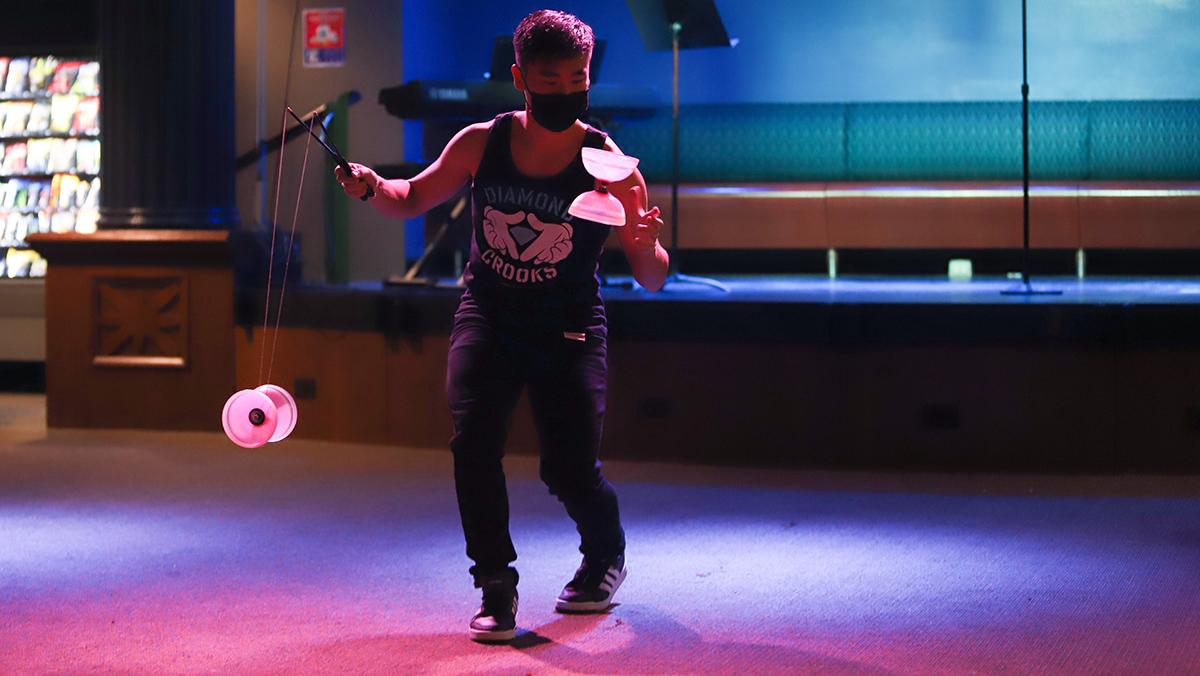 On Oct. 29, about 100 students gathered in the IC Square to celebrate the Mid-Autumn Festival — also called the Moon Festival — a traditional celebration from Eastern Asia, particularly China. Food, music and performances from their respective areas of Eastern Asia were highlights of the celebration.

The event was hosted by the Ithaca College Chinese Students and Scholars Association (CSSA), which promotes Chinese culture and community on the college’s campus. While the event was canceled last year due to the college being virtual in its Fall 2020 semester, it has happened in multiple years before.

Junior Jingwen Ou, the president of the CSSA, said the purpose of the event was to give the college community a taste of traditional Chinese culture. Ou said the group plans to hold a celebration for the Chinese Lunar New Year as well.

“The Mid-Autumn Festival is a celebration of the full moon,” Ou said. “[It’s about] coming together as family and friends in China. It’s a holiday that’s celebrated very widely in China, by pretty much everyone. That’s why we have all these performances and invited everybody and [got] the mooncakes and it’s really just about coming together.”

In Chinese culture, the full moon is a symbol of peace, prosperity and reunion. The moon is considered full on the 15th day of the eighth month of the lunar calendar, which is when Mid-Autumn Festival is celebrated in China. Mid-autumn Festival is usually celebrated with mooncakes — a Cantonese delicacy typically made with bean paste and egg yolks — which were served at the event. Other areas of Eastern Asia also celebrate the Mid-Autumn Festival, like Taiwan, Vietnam and South Korea.

Sophomore Inbaayini Anbarasan attended the event and said being able to celebrate the festival reminded her of Mid-Autumn Festival celebrations she experienced when she grew up in Singapore.

“It’s so fun,” Anbarasan said. “I’m from Singapore, and I went to all of these celebrations in Singapore also, and I haven’t been to any in a solid three years. It’s been really nice to come back to one of these and just celebrate culture. I’m a very culture-oriented person also, so it’s really nice to see people having fun and spreading their culture.”

Anbarasan said the event is important to her as a person of color, as well as someone who grew up celebrating the Mid-Autumn Festival in Singapore.

“I really really like this because as a person of color at a PWI [predominantly white institution], I often find myself not as represented as I’d like myself to be,” Anbarasan said. “Going to these kinds of events really means a lot because the minorities are being heard, and it really means a lot to me, so it’s really nice.”

Freshman Alvin Yang is a member of CSSA and said he was happy that the turnout for the event was much higher than he expected. Yang said events like the Mid-Autumn Festival are important for the college community as they expose the student body to new cultures they may have not experienced before.

“We [CSSA] have Chinese music and a lot of things that are served such as Chinese food as well as a lot of culture that we might otherwise not come across in our daily lives,” Yang said. “We can come across them in this situation, and I think that is very telling.”

There were multiple music performances at the festival. Junior Qilei Huang and sophomore Selena Forlenza performed “Big Fish & Begonia,” which is a combination of Eastern and Western Chinese music. The festival also featured a dance performance with the diablo, also called the Chinese yo-yo.

“I think it’s always wonderful to share our culture,” Pei said. “I think generally when it comes to ethnic-centric events, I find that Americans tend to be a bit hesitant to enter our spaces for very understandable reasons. But honestly, the thing that I love most is to be able to share my culture and after everything that’s happened over the past two years, I find that this event has only taken up a more important meaning.”