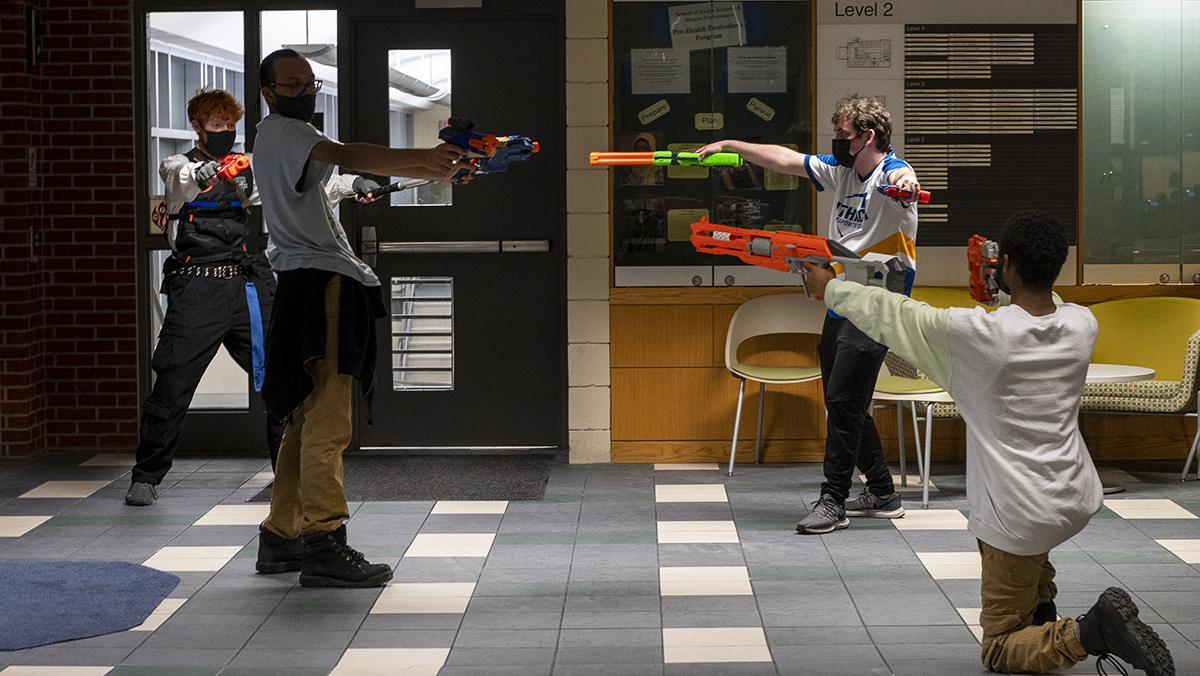 Last Saturday night, the Center for Health Sciences (CHS) turned into a battlefield.

“Are you all ready?” sophomore Ian Volk, the vice president of the Ithaca College Humans vs. Zombies Social Club, yells to two opposing teams with their backs to the wall, armed with Nerf blasters and foam shields and swords. A countdown starts, fast-paced music plays from a glowing rainbow speaker on the ground floor, and the teams are off running up staircases and darting behind pillars.

Super Hearts Day Nerf War took place from 7 to 10 p.m. Feb. 12 and was the Human vs. Zombies Social Club’s first event of the semester. The event was Valentines and Super Bowl themed because it took place the Saturday before both. The event was open to seasoned Humans vs. Zombies members and newcomers. Three different play modes were played over the course of the event including team vs. team, mafia, and cupid, a new elimination game recently created by junior Brittany Hope, the club president, where players are paired up based on who they hit first. Human vs. zombies, the game the club is named for, is reserved for outdoor events when the weather is warm in spring and fall. While the weather is cold the team plays other games inside.

Due to its wide open space, and exposed floors,  the CHS atrium makes for the ideal indoor battleground, allowing players to hit each other from different levels and hide in staircases. Even the elevator has a tactical purpose as members of one team use it to quietly ambush the other. While the upper floors are all part of the battlefield, the center of the bottom functions as a base where all games start from.

“[I like] the silliness of the whole club and just being able to be yourself and the way you want to be is a really big reason why these events are so much fun, ” Volk said “It’s also my biweekly exercise. I get to run around like a madman doing whatever the heck I want.”

Although Nerf blasters are a staple of the club’s games, they are not required to participate. Players have the choice to use Nerf swords, shields and bows as well as unworn rolled-up socks — called bombs — provided to them by the club.. Being tapped by a sword or hit by a sock bomb counts the same as being hit with a Nerf dart, meaning the player is out of the game or has lost one of their three lives.

“[I like] that I get to be an absolute child and no one makes fun of me,” Hope said. “We’re kids in college and they’re foam darts. We can’t be taken seriously at all and it’s so much fun.”

Sophomore Gabrielle Moran joined Humans vs. Zombies last semester and Super Hearts Nerf War was her second event with the club. She said the Nerf wars felt like a real-life video game.

“It’s a real adrenaline rush but in a safe environment,” Moran said. “What I really like is being able to be a little nerdy with this.”

The first game of the night was team vs. team, in which the players are split into two teams, one marked with bandanas, the other not. Each player got three chances to get hit with a dart, and the last team left standing won. After a brief intermission where all the players wandered all three floors cleaning up darts, the first-ever game of cupid began. In cupid, the first person a player hits becomes their partner, and they work together as a team until there’s only one couple standing.

Hope came up with the game in honor of the event taking place the weekend before Valentine’s Day. The game was a success and Hope said the game will continue to be played at other events.

“It’s pretty fun and a little chaotic,” Peyron said. “I saw a custodian walk by during the last game and I felt a little bad for him because he’s probably like ‘what’s going on these floors?’ I like it.”

Klos joined the Humans vs. Zombies club last semester, but didn’t get a chance to participate due to a busy schedule.

“Nerf was a big part of childhood,” Klos said. “A lot of my friends and I would have Nerf wars like this in middle school and high school but we teetered off because we all got busy.”

The last game of the night was mafia. At the start of the game all the players circle up and draw cards from a deck. Red numbers are mafia members and a red king is a drunk mafia who doesn’t know who the other mafia players are. The ace of spades is the detective who can ask eliminated players what role they were, the king of spades is a doctor who can heal eliminated players and black numbers are civilians.The two jokers are civilian friends who know each other are not in the mafia. The game ends when the mafia has eliminated all the civilians or the civilians have eliminated all the mafia.

Once all the roles are assigned, the players head their separate directions. But while other games often have explosive starts, mafia starts much quieter with the players being careful about who they eliminate and who sees them do it.

When a player is hit playing mafia, they must sit down in the location where they were taken out until the game ends or they are healed by the doctor. During a game of mafia last semester, Moran said, a group of players were all hit in the elevator while trying to ambush another group. They ended up being stuck in it and were forced to ride it up and down until the end of the game.

Humans vs. Zombies plans on holding other events like Super Hearts Day later in the semester that will be open for anyone to join.

“It’s a good way to get energy out if you’re stressed,” Hope said. “Maybe bring a friend you hate a little bit, take your anger out on them. We don’t care. Just have fun.”