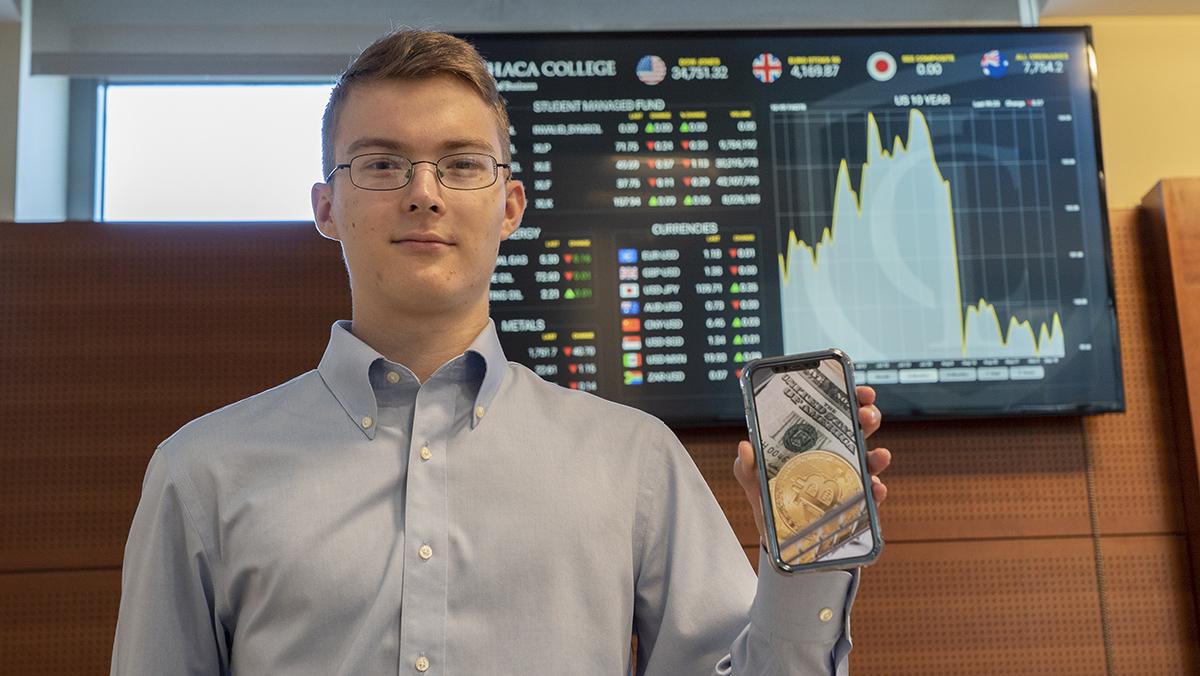 Recently, some Ithaca College students have rolled up their sleeves and gotten involved in cryptocurrency: investing their own money into it, attending debates to discuss ethical concerns and taking courses about cryptocurrency offered by the college.

Cryptocurrencies are novel forms of currency that use data files as money. The first and largest cryptocurrency is Bitcoin, which was launched in 2009 by its anonymous creator known under the pseudonym Satoshi Nakamoto. Confidence in cryptocurrencies have exploded in the turn of the decade, with Bitcoin’s price rising from $10,000 per coin to over $60,000 per coin in the past year.

Senior Max Petrov said he started putting money into Bitcoin two years ago, using money from his paychecks to build up his position little by little. As a student in the School of Business, Petrov was a member of the IC Core Trading Consultants for a few years at the same time that cryptocurrencies have exploded.

“Recently, in the past year or two, cryptocurrencies have caught my eye,” Petrov said. “The gains on cryptocurrencies have been massive, which already makes it an interesting look. Not necessarily a good investment, but something to consider because if something is blowing up thousands of percents, it’s worthy of a second look.”

Junior Calvin Carmichael has worked as an intern for the National Association of Securities Dealers Automated Quotations (NASDAQ) — one of the most followed American stock market indexes. Carmichael said while he does have money in cryptocurrency and sees potential in the technology, he views it as a form of gambling.

“I think the best explanation for cryptocurrency would be like a casino,” Carmichael said. “With crypto, it’s incredibly risky … and there is really at its core, no way to value crypto.”

There are also grave environmental consequences behind cryptocurrency, specifically Bitcoin. Since Bitcoin is decentralized, it requires a process called mining to verify transactions. This mining requires technology that uses unprecedented amounts of fossil fuels.

“I definitely do not fall on the median of opinions in the business school,” Ingerson said. “Personally, I tend to stride far more toward less business-centric ideals. I see reconstruction of the idea of business and trade as crucial towards social, environmental and economic sustainability.”

Some economists, like Michael Burry — one of the people who predicted the subprime mortgage crisis of 2007–08 that caused the Great Recession — have said there is a cryptocurrency bubble that could burst and deepen the recession.

Ingerson said he agrees with this comparison.

“I think comparing it to the housing bubble is a very good analogy,” Ingerson said. “There’s always going to be people who made millions if not billions and then got out of it right before a crash.”

Steven Novakovic, instructor in the Department of Finance and International Business, said while speculation around cryptocurrency is high, a crash is unlikely.

“While the numbers sound big, they’re not big enough to really impact the wealth of the average consumer,” Novakovic said. “The underlying technology is blockchain, [which] is a technology that I think is very legitimate, and it’s growing in its application across a lot of areas of finance. And I think that’s really meaningful.”

In Fall 2018 and in Spring 2019, Novakovic taught minicourses in the business school on cryptocurrencies. Novakovic said this coming spring, the college is bringing the classes back.

While cryptocurrency is taken seriously by some, separate forms of cryptocurrency that are not taken seriously are called memecoin. Examples include Dogecoin, Pepe Cash and SHIBA INU. Dogecoin was founded as a joke, as its logo uses the iconic picture of a Shibu Inu dog from the popular “Doge” meme. However, Dogecoin currently holds a market cap of nearly 28 billion dollars.

Junior Jordan Alexander said via email he put money in Dogecoin with his dad and his brother before it blew up. Alexander said he started out with 800 Dogecoins, which he bought for 11 cents a piece. In May, Dogecoin was worth over 65 cents per coin.

“Watching Dogecoin skyrocketing in value while having invested in it provided a sense of euphoria as well as shock,” Alexander said. “It makes you proud as an investor and knowing that you made the right decision when deciding where to put your money and letting it work for you instead of vice versa.”