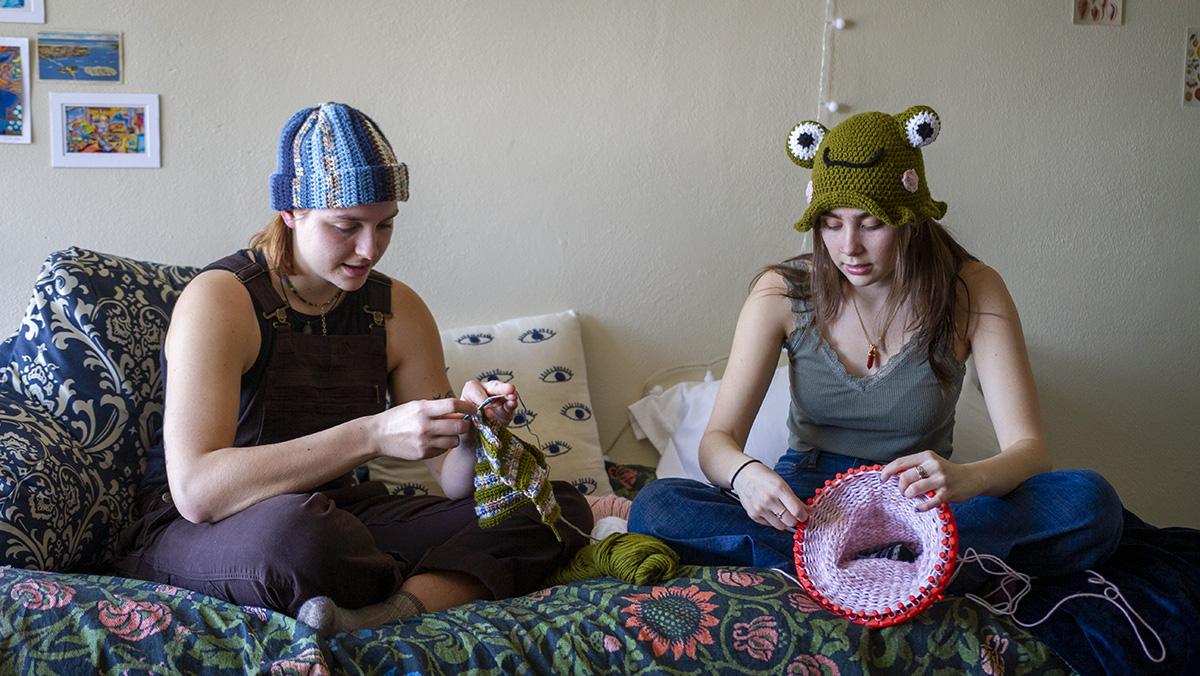 Ithaca College sophomore Kayla Markwardt took up the hobby of crocheting early on in the COVID-19 pandemic. However, when one day the supervisor at her job brought in a loom, Markwardt had the idea to begin making hats. When her friends and classmates recognized her talent, they persuaded her to create a business — Ithaca Baked Beanies.

“[My friends] were like, ‘You can’t keep giving these away for free!’” Markwardt said. “So basically, my friend Sam Stys made an Instagram account and was like ‘You’re going to start selling these.’ So that’s how [Ithaca Baked Beanies] came to be.”

One of the distinguishing aspects of Ithaca Baked Beanies is how partnerships based on close friendship was integral in its foundation. Markwardt’s friends recognized where her skill could take her entrepreneurially.

Sophomore Samuel Stys was one of these friends, and he was responsible for giving Ithaca Baked Beanies a social media presence.

“When we started [Ithaca Baked Beanies], Kayla wasn’t super concerned with getting it out there or anything, but in realizing how talented she was with these and how many people really liked them, I was like ‘Well, they deserve to be seen,’ and so I started the Instagram account as a way of getting the word out there,” Stys said.

The business’s Instagram is whimsical and lighthearted, often photographing grinning beanie-wearers at an elevated angle as to feature beanies in their lush, vibrantly coloured glory.

The hats themselves come in about three different varieties: solids, two-tones, and custom-made designs. The hats also have names that encapsulate the characteristics of the hat featured. Take the mint chip greenie beanie — layered with green, white, and brown. Every hat is handmade, either crocheted or made on a loom. Prices for the hats range from $15-$30.

Though the business has no other virtual presence apart from an Instagram page, word-of-mouth has remained its most effective form of advertising. Initially, only Ithaca College students were wearing the beanies, but as they traveled off campus, it attracted the attention of others with no affiliation to the college.

“We have gotten quite a lot of orders from New York City because one person saw an IC student wear multiple Baked Beanies in the city,” Markwardt said.“People were asking her where she got them from. It’s nice to keep it local, but I’m interested in branching out to shipping orders, too.”

While the ownership and logistics of Ithaca Baked Beanies is managed by multiple students, Marlwardt said there are difficulties that come along with balancing a business and academic life.

“I never intended this to turn into a business,” Markwardt said. “And so, it really took off at the end of last semester. I remember feeling pretty stressed during finals week. I was like, ‘People are leaving soon, and they really want their beanies before they leave.’ How was I going to get all these beanies done, and get my schoolwork done?”

On the other hand, the repetitive, mechanical motions of beanie-making are therapeutic to many members of the team responsible for production.

“I don’t think it ever really ever interfered with my schoolwork because hat-making was something I was excited to be doing, so it didn’t bother me that I was losing sleep to do it,” Stys said. “For me, it was also a motivator: I needed to get my homework done during the day so that I would be able to go make hats later. It was able to give me a balance.”

Markwardt is an outdoor adventure leadership major who is mandated to take an immersion semester to develop outdoor-related skills, so she has temporarily entrusted the management of Ithaca Baked Beanies to sophomore Lydia Brandt.

“We’ve definitely considered selling at the farmers market,” Brandt said. “However, we’re lacking in hat makers, so we just don’t see ourselves doing that right now. But in the future when there’s more time and more people to make hats, we would definitely love to do that, and even start a website. Maybe even selling downtown at The Old Goat, the outdoor gear store. But those are all ideas that haven’t been followed through simply due to a lack of time and producers.”

Most importantly, involvement in Ithaca Baked Beanies has been very intrinsically rewarding for employees, Brandt said.

“It’s really cool to see people you know — or people you don’t know — walk around campus wearing a hat that you made, and just seeing this business grow. It started out casually, and it still is casual, but it has expanded into something bigger, which I think we’re all very proud of,” Brandt said.