Five disgruntled journalists demand answers at a presidential news conference. The president, whose red tie crisply contrasts his white shirt and black suit, stands squarely behind a lectern and dodges questions, growing frustrated with the press.

The scene may seem familiar to anyone who has scrolled down a social media site or turned on a television to see President Donald Trump in the past year. Students in associate professor Annette Levine’s Teatro: Performance and Production class have turned it into a humorous piece of Spanish theater.

Teatro: From the Page to the Stage and Teatro: Performance and Production are two Spanish theater classes Levine, also a Latin American studies coordinator, teaches in the fall and spring semesters, respectively. Students in Teatro: From the Page to the Stage read and analyze Spanish plays and eventually adapt them or write their own, which students in Teatro: Performance and Production then adapt and perform the following semester.

Levine said the typically short plays focus on issues of social justice. This semester, the class has been working on two 10-minute plays. One, titled “Ash-e Jo,” was adapted by sophomore Danielle Ciolfi, sophomore Kyle Davis, junior Amy Weiss and freshman Kristen Harrison. It tells the story of a Chilean woman (junior Kaylynn Powell) and an Iranian woman (senior Melanie De Lima) in New York City on Sept. 11, 2001. The play, which takes place in a kitchen, is appropriately named after a traditional Persian barley soup. The other play, “POTUS: Conferencia de Prensa,” was inspired by Trump’s controversial policies and treatment of journalists at news conferences. It was written by freshman Christopher Morales.

Morales wrote “POTUS: Conferencia de Prensa” with the help of his classmates. He based it on a play about the presidential election other students crafted in the teatro class of the Fall 2016 semester. Morales, who is interested in journalism and concerned by some of the president’s actions toward the press, said he decided to adapt the play to have it take place at a news conference.

The plot of the play involves five journalists — Morales, sophomore Emily Chavez, freshman Kaitlin Miczek, freshman Morgan Diegel and freshman Emrys Taylor-Milner — who ask Trump (sophomore Ryan King) questions at a news conference, only to be met with contempt. Morales said he based his writing on real-life events.

“We see in reality that some of these conferences are a joke, the way that they go,” Morales said. “Journalists are trying to do their job asking the tough, difficult questions, and then you see the president sort of ridicule the journalist, the topic or their question.”

Morales said he became interested in last year’s campaign as it would be his first time voting. Additionally, he said, he was concerned by Trump’s rhetoric regarding Mexicans and other Latinos.

“This campaign season, [Trump] targeted a lot of different groups, and the very first ones were Mexicans and Latinos,” Morales said. “I’m Latino, my parents are from Mexico, and they were immigrants themselves.” 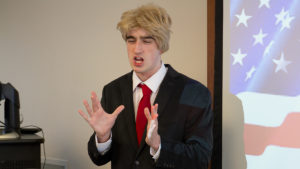 Though Morales’ parents are both United States citizens, he said he realizes many of the president’s immigration policies instill real fears in many around the country. However, he said his goal in adding humor to this play was to give people a chance to laugh and have fun with an otherwise serious topic.

“I’m very passionate in my work in communications and media to try to use it as best as I possibly can,” Morales said. “If it can help people, great. I think in this way, I’m helping people garner up some humor and shine some positive light.”

King is neither a fluent Spanish speaker nor an experienced actor, but he said he wanted to take the class to improve his skills in both areas. Members of the class discussed what roles they wanted, and King decided to volunteer to play Trump. He said besides thinking the role of Trump would be fun to play, he also hoped taking the lead role would help him do well in a class he was otherwise not confident in.

“When I got to the class I realized how good everyone was at Spanish, and I was like, ‘How am I going to pass this class?’… I was nervous at the beginning, but I also thought it would be fun,” he said.

Levine said though the demographics of her class change every semester, she estimates about 60 percent of her class this semester is made up of students like King, who approach Spanish as a foreign language. She said about 20 percent are completely bilingual and 20 percent are heritage speakers, who may have spoken Spanish at home but have not learned it in a formal, academic setting.

Some students opt not to act but take part in other elements of production. For “POTUS,” senior Kevin Guevara is the stage manager. Sophomore Gabriela Friedman does lights, set and sound for “Ash-e Jo.” The productions are meant to be stark and able to be performed anywhere, but students still help out in using portable lights and providing music from their phones with speakers. This minimalistic style of performing is known as “teatro campesino,” which literally translates to farmworker theater.

“The idea was to follow the philosophy of teatro campesino, which is that everything you need for the play should fit inside a small box,” Levine said. “I think it creates a very unique space, where students are able to consider what is theater and what power theater can have.”

As an aspiring journalist, King said he strives to be as unbiased in his political views as possible but saw this class as an opportunity to use the medium of theater to explore Trump. King is also a staff writer for The Ithacan.

“I don’t think we’ve had anything like this in the history of our country,” King said. “He’s definitely very unique. There’s a lot of little intricacies to him, so to speak, so it’s very fascinating to watch.”

The students have spent the entire semester working on the play, collaborating to edit the script and improve their acting skills. P.A. Angelopoulos, Cornell University performing and media arts visiting scholar, visited the class to help the students work on the piece.

“He’s been coming in … to help us with acting, and there is a lot to it,” King said. “So I’m trying to get better, and I’m certainly learning a lot from that, so it’s a pretty cool opportunity.”

Morales said he modeled his character on one of his favorite journalists, Jorge Ramos, a Univision reporter who is known for his rebellious investigative style. In August 2015, Ramos was escorted out of a news conference for trying to ask a question about immigration to Trump.

“I consider him as one of my idols,” Morales said. “He’s one of those guys that just won’t stop. He knows when things are wrong, and he will be the one to ask all of those tough, difficult questions, whether people like him or not.”

Levine said she intentionally did not ask her students about their political views regarding this piece but hoped taking part in this play would challenge both the actors and their audience to stretch themselves and think critically about current events.

As a communications student, Morales said he has learned there are multiple sides to every story. The medium of theater has allowed him to use humor artistically and politically to present his views.
“Anyone from any political background, I think, will be able to watch this, will be able to enjoy this,” Morales said. “I think it will really get them thinking.”

CORRECTION: A previous version of this article stated the play will be performed at Elmira College April 4. This information has been revised for accuracy.