IC students use podcasting as a medium for expression 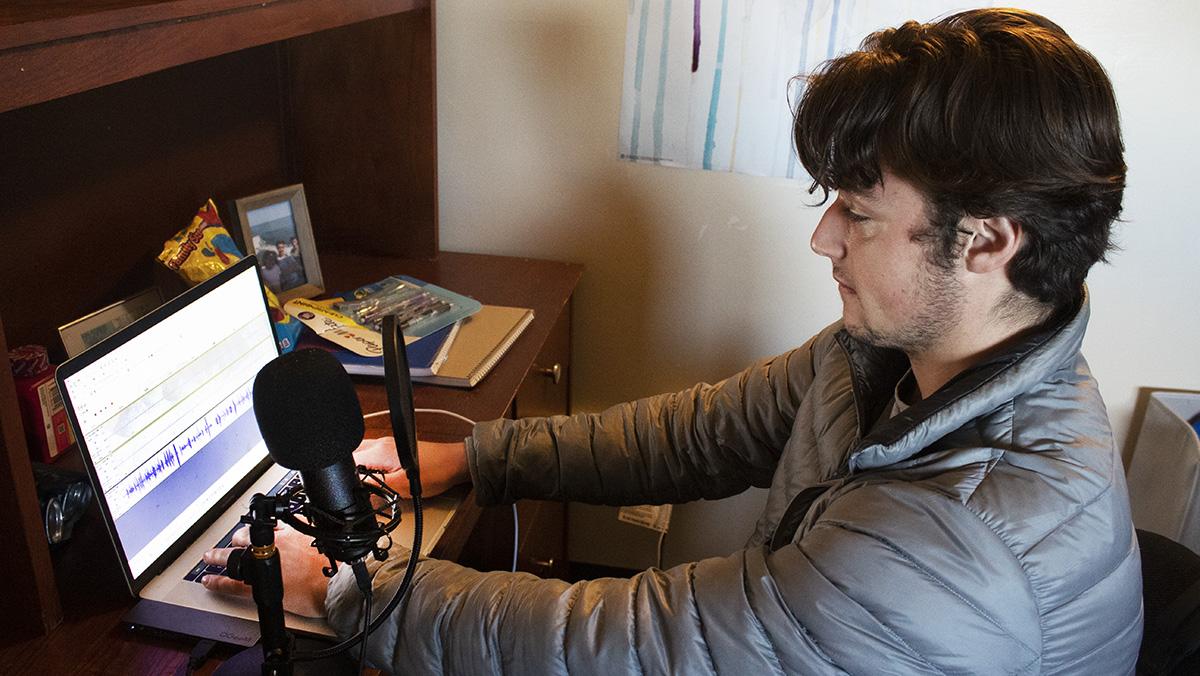 Malik Clement/The Ithacan
Junior Gabe Baltierra edits an episode of his podcast "The Next Chapter," which focuses on mental health awareness, in his makeshift studio on campus.
By Emma Kersting — Staff Writer
Published: November 3, 2021

Since the beginning of the COVID-19 pandemic, sophomore Daniel Fox has shared his predictions for upcoming sports games through discussions with his friends from high school over Zoom. These discussions are recorded and later published as episodes of “Who’s on Top,” Fox’s independent podcast.

Ithaca College students can host podcasts at The Ithacan, VIC and WICB radio and more media organizations on campus. However, some students like Fox produce podcasts on their own, with no affiliation to campus organizations. Podcasting, especially among young people, was trending upward even before the pandemic. According to Voxnest, podcast listenership increased globally by 42% when the pandemic began. Morning Consult found that Generation Z reported a 31% increase in pandemic-era podcast listenership, the largest demographic increase found.

Fox is also one of the producers of “Who’s on Top,” which his friends from high school created. The show has been running since December 2019 and has 82 episodes. In each episode, Fox and his friends talk about predictions of different games based on how anticipated they were. There needs to be enough content for Fox and the other hosts to talk about in order to fill an episode. At first, “Who’s on Top” was hosted only by four of Fox’s friends, but he joined the podcast in September 2020. Since the pandemic, episodes of “Who’s on Top” have been recorded over Zoom. Fox says production for the podcast is a team effort between his high school friends; either he, Jacob Kasdan or Jeremy Giles edits the recordings, Ori Ben-Ari adds music and Elis Gordon publishes the finished episodes on Spotify.

Fox said one of the main challenges of producing “Who’s on Top” is scheduling, because all of the members of the team attend different colleges. While some episodes might be missing a team member or two, Fox said he is optimistic because the podcast is a great way for him to keep in touch with his friends from high school.

“I love it because it’s a way to connect with my friends, where we can just meet once a week and talk about sports,” Fox said.

Fox’s laid-back approach and use of Zoom to record episodes comes at a time when it is easier than ever to start a podcast. The average cost of a vocal microphone is $15 and free editing software is pre-installed on most computers. Additionally, the internet allows for high accessibility to guests and audiences. This has provoked the creation of 2 million podcast shows, as of April 2021.

For Ithaca College students, the Center for Creative Technology (CCT) hosted a podcast workshop Oct. 21 on the production and overall process of creating a podcast. The workshop discussed the three processes of podcast production; pre-production, production, post-production and distribution. These processes include the scripting, recording and distribution of a podcast episode. The workshop also showed how the CCT’s recording and mixing equipment works. Students and staff are able to reserve the recording studio in CCT and request assistance from the staff if they are unfamiliar with the technology.

Junior Gabe Baltierra is the host and producer of “The Next Chapter,” a podcast focusing on mental health awareness. The show is relevant to college students as 95% of college counseling directors believe mental illness is a growing problem on campuses. “The Next Chapter” began in September 2020, is recorded and published every week and has 113 episodes.

“When I created this show, I had the goal to help people,” Baltierra said. “I have OCD, and I have had it since I was very young, so that is one of the main reasons I started ‘The Next Chapter’ podcast, to be open and get that conversation going.”

Baltierra first became interested in creating podcasts his first year at the college and has taken part in several podcasts on topics like sports and travel. Baltierra said he writes, records and edits each episode on his own, although at times, editing can be very time consuming.

Sophomore Jack DiBitetto is one of the hosts of “The Everything Geek Podcast,” which focuses on entertainment like movies, comics and TV shows. DiBitetto said he started the podcast his sophomore year of high school with a friend of his after noticing that he had different opinions from the hosts of entertainment podcasts he listened to. The hosts of “The Everything Geek Podcast” only produce episodes when they are both home from college, usually over the summer or winter breaks between semesters. So far, the show has 37 episodes.

Episodes usually consist of the hosts watching a movie, like Zack Snyder’s “Justice League,” followed by a recorded discussion, and guests on the show are typically friends of the hosts. After working on it for so long, DiBitetto said he has strengthened his skills in editing and producing, especially since coming to college.

“Every time I come back home, there’s something new that I can bring to our show like, ‘Oh, I learned this in the editing room,’” DiBitetto said. “Even though I’m a big part of the podcast, I couldn’t do it without Anna [DiBitetto’s co-host]. I think recording [over Zoom] just wouldn’t be the same.”

Baltierra said when he started producing “The Next Chapter,” he was working completely on his own, while having guests on the show to share their experiences with mental health. After six or seven months of production, Baltierra said he established a team with some of his friends to come on the show as guests or help him come up with new ideas. One friend from high school even created a music clip to introduce each episode, but Baltierra said he still does all of the editing himself.

Baltierra, Fox and DiBitetto all said editing can be one of the biggest challenges, as it tends to be very time consuming and meticulous. Baltierra said a typical episode takes about two hours to edit, but the process and the end product is something he enjoys making.

“I love to talk, especially about mental health awareness,” Baltierra said. “I love talking about that topic, and a podcast is a great place to do that. It’s just you and the microphone, it’s actually very relaxing.”

Ithaca College’s a cappella groups return to the stage