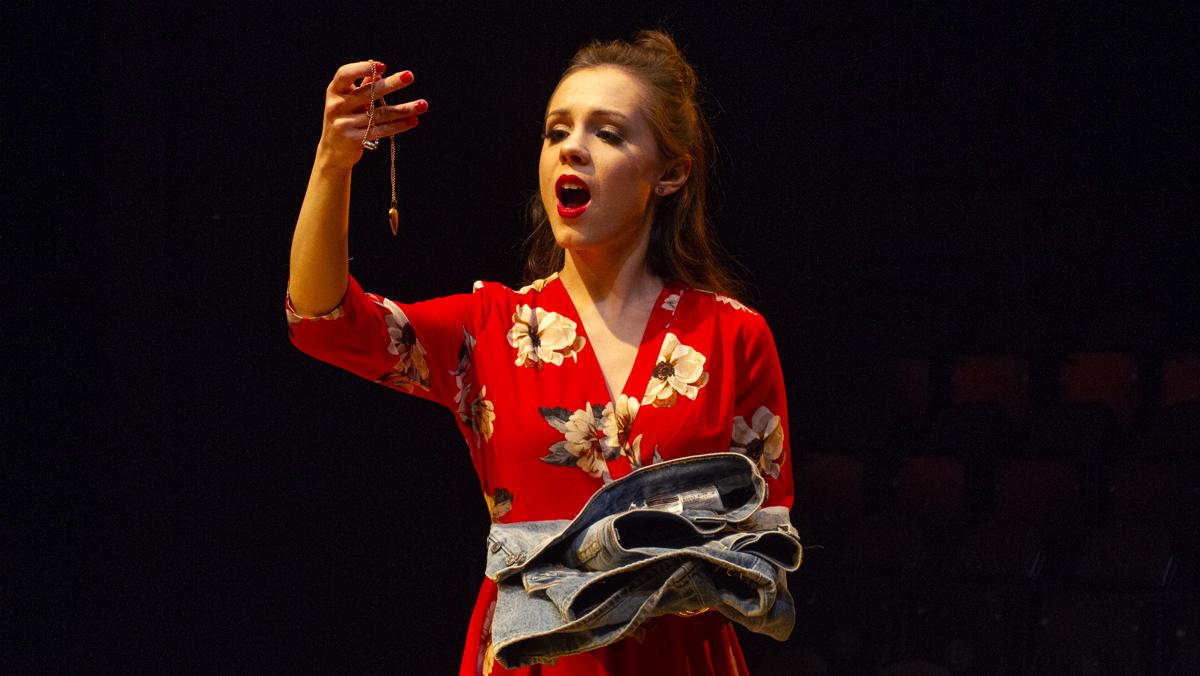 A wealthy woman and her maid take in a handsome beggar and go to absurd and hilarious lengths to compete for his love. A fraudulent medium abuses her mute foster son and eventually slips into insanity as a result of her own manipulative and exploitative actions. 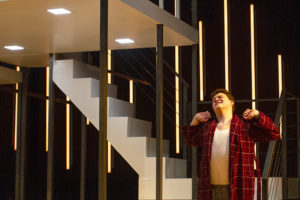 Andrew Sprague performed in the opera. The production consisted of two modern one-act operas, “The Old Man and the Thief” and “The Medium.”

Every year, the Ithaca College Department of Theatre Arts presents an opera in the spring, but this year, students are performing two one-act operas back-to-back. These operas, “The Old Maid and the Thief” and “The Medium,” were written in English by Italian-American composer Gian Carlo Menotti in 1939 and 1945, respectively. Theatre Arts began performing Feb. 21 and will be continuing performances until March 2 in the Clark Theatre in the Dillingham Center.

Although these pieces share a stage, composer and modern musical style, they could not be more different. “The Old Maid and the Thief” tells a lighthearted, humorous tale about attraction’s power over morality, while “The Medium” employs dark themes of abuse, fear and mental illness. Each show is double-cast, but the casts are small.

Director Norm Johnson is an associate professor in the Department of Music Performance who retired last year but is back working with students on these productions. He said these particular operas were chosen about a year ago because they feature interesting characters, have dynamic music and fit young voices well.

“They are just the right challenge for young singing students,” he said.

Students auditioned for these operas in September with arias, or classical songs for solo voices, from the show. Once they were cast, they got to work with their personal vocal coaches and music director Christopher Zemliauskas to learn the pieces. By the time the casts began working with Johnson in January, they had the music memorized. 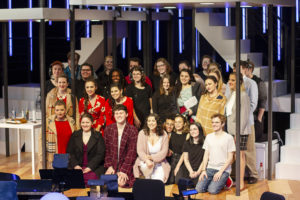 The operas were double cast, but the cast was still very small. The casts alternated for each performance.

Junior Margot Wegman and senior Virginia Douglas play the character Miss Todd in opposite casts of “The Old Maid and the Thief.” Miss Todd is a wealthy, middle-aged socialite who seems perfectly poised and put-together on the outside but is revealed to be desperately goofy as the show goes on. This production is Wegman’s first opera, and she said she had fun bringing her character to life and finding aspects of her she could relate to.

She said that though Miss Todd’s story is slightly silly, she drew from and learned to empathize with her character’s vulnerability.

“Miss Todd, in particular, is very vulnerable and attaches to relationships with men because she’s been wronged in the past,” she said.

Whereas the characters of “The Old Maid and the Thief” are somewhat whimsical caricatures of overzealous, lovestruck women, juniors Lindsey Weissman and Emily Dimitriou play Madame Flora, who is a darker figure, in “The Medium.” Madame Flora runs a business holding false seances in her home. In addition to being deceptive and exploitative, she is also abusive. She manipulates and mistreats the young people who work for her, Monica — played by sophomore Syona Ayyankeril and senior Stella Rivera — and Toby — played by freshmen Tristan Tierney and William DeVary —  to put on these deceitful productions. Toby is a naive, vulnerable orphan who cannot speak. In some scenes, Toby shakes with fear as Madame Flora threatens and assaults him.

“It’s probably the most draining role I’ve ever had,” Weissman said. “This is so different from anything else I’ve experienced before. She is horrible. She is an ugly, abusive person. She’s absolutely hateful. … This show is about really difficult themes to talk about, but they’re themes that are unfortunately big issues in our country today and in the world today. It’s child abuse, domestic violence, untreated alcoholism, untreated mental health, schizophrenia … greed, karma, guilt, and she is the personification of all of that. … I’d say the hardest part is walking in, putting on this persona and doing our best to try and find a way to portray the character sympathetically and genuinely.”

“The Medium” is also both Weissman and Dimitriou’s first roles in a full-length opera. 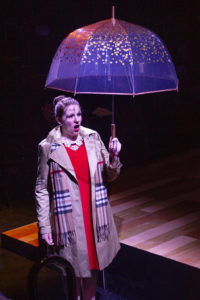 Kristy Shuck was a cast member of the opera. The operas were chosen because they suited younger voices and put a modern twist on the genre.

“For my first ever opera role to be such a dynamic character has really been good, and even though she’s crazy and the things that she does are awful, as a performer, it’s been really fun to explore the options that are in there, and it’s really pushed me vocally and dramatically,” Dimitriou said.

Small, double-casted productions also allow the students to work with one another in cultivating their characters. Wegman said the small cast and Clark Theatre’s intimate performance space allow for a deeper performance.

“You get a lot more personal connections with your characters that you may not see in a major production,” she said.

The double-casting of the shows leads to different interpretations of the characters and stories. Weissman said her and Dimitriou’s portrayals of Madame Flora are very different. She said that at the beginning of the rehearsal process, Johnson asked each of them what drove their character. Weissman said fear was Madame Flora’s biggest motivator, while Dimitriou said insanity drove the character most.

“I think since then, we’ve integrated each others’ ideas but also stayed true to our own idea of the character,” she said. “It’s the same character, but it’s just driven by different things.”

The process of bringing these characters to fruition was also different for each cast member. Weissman said she chose to map out the dramatics first and then perfect her technique, while Dimitriou did the opposite.

What sets these performances apart from traditional operas is their Broadway-like theatricality. Traditionally, opera singers do not move about the stage while they sing their arias. However, Johnson said in his staging, he’s moved away from the traditional convention of standing and singing, or “parking and barking,” as the vocalists teasingly call it. Instead, the singers in these performances act and move as they sing, much like performers in musical theater.

“This show is basically a musical, the only thing that’s different is our vocal technique,” Dimitriou said. “And I think that that’s also been very interesting because we have to come at it more from an actor’s point of view than a singer.”

Wegman said she appreciated Johnson’s approach to directing these pieces.

“I really admire the work he’s done for this opera because I think that’s what makes it so contemporary and brings in that musical theater aspect,” Wegman said. “We’re not just planting and singing, we’re moving about what would be our characters’ regular day.”

In several scenes, Miss Todd and her assistant Laetitia — played by seniors Megan Jones and Monica Ramich — sing while frantically running up and down stairs.

Additionally, the vocal styles are different. Opera singing involves creating a full, tall sound that resonates loudly enough to project over a full pit, while musical theater singing is more about creating a focused, sharp sound. Aside from these fundamental techniques, the lines between opera and musical theater are blurring as the styles evolve.

“Essentially, there are many of the same things; it’s just the difference in the music,” Wegman said. “And the intensity of the music, I think, is quite different.”

These operas are modern and musically complex. Much of the music in them has atonal qualities, meaning the vocal melodies and instrumental accompaniment do not always complement each other in predictable ways.

“It was quite difficult to learn, but at the same time so beautiful,” Wegman said. “And there are really beautiful moments in the music that really tie all the storylines together.”

Johnson also took directorial liberties in modernizing these shows. “The Old Maid and the Thief” takes place in a Kardashian-inspired reality complete with expensive-looking costumes, contemporary-style furniture and even an Amazon Alexa. In “The Medium,” Toby uses a MacBook to manipulate the lights to trick customers. Johnson also said he reduced some of the ages of the characters to make them more relatable to the actors.

It may seem to many young people that opera is irrelevant, unrelatable or inaccessible, but Johnson said these operas are a good starting point for those who want to explore the art. Menotti was a popular composer during his time, and “The Old Maid and the Thief” was originally written to be performed for mass audiences over the radio.

“There’s so much story behind it, and it’s in English, so this time, it really gives the audience members a chance to follow along,” Wegman said.

Seniors Dunham Hall and Aaron Rizzo said they attended the opening night of the opera Feb. 21 to support their friends. Hall said this production was the first opera he has seen, and Rizzo said he has seen a more traditional opera in the past. He said that while the opera he saw in the past was difficult to follow, “The Old Maid and the Thief” was engaging.

“This is is in English, and it’s more modern and it’s funny,” he said.

Wegman said the challenges these operas present have helped her and her fellow cast members improve and broaden their abilities.

“It’s just fun,” she said. “We really enjoy ourselves, and we work hard and we push ourselves in many different ways.”