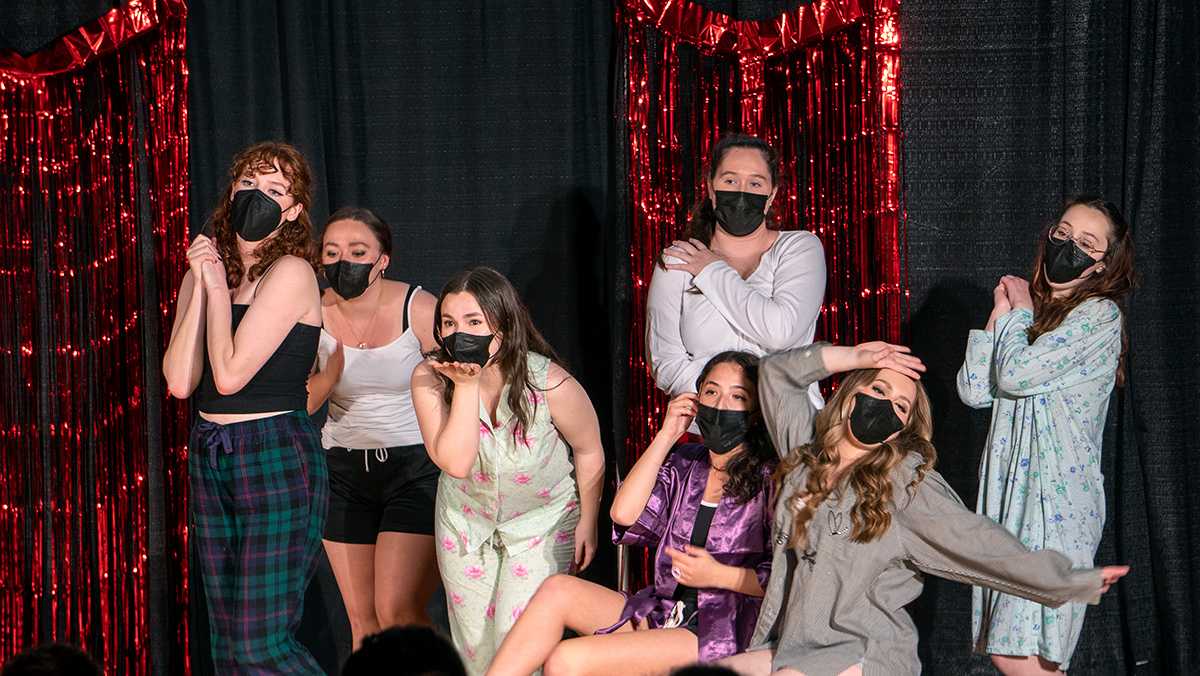 With black raised curtains, a simple lighting rig and red, shimmering tinsel, IC Theatre Lab transformed the James J. Whalen Center’s Presser Hall into a makeshift stage for its production of “Grease.” The performance hall was full of excitement as the show was sold out.

This production of “Grease” put on by the IC Theatre Lab was the product of the organization’s more experimental take on theater. The president of IC Theatre Lab, senior Julia Shuman, explained that contrary to the more mainstream theater productions, there are two types of shows that the student-run organization puts on.

“IC Theatre Lab normally does two different types of shows per semester,” Shuman said. “It does a one-time challenge show and then one show that runs rehearsals for about two months.”

For this semester’s time challenge the ensemble only had one week to practice and get “Grease” ready for its grand premiere.

“Learning-our-music day is on Sunday and then for the rest of the week from Monday to Friday we have rehearsals every day usually from around six to ten or eleven at night,” Shuman said. “We have one run through on Friday, then our shows on Saturday and that’s it.”

This added time constraint can add lots of new twists and turns in the rehearsal phase of a musical. Freshman musical director Sam Wurdemann said that in order to get this production up and running, they had to pre-record a great deal of vocal tracks in advance to best help people get familiar with the songs before rehearsals even began.

“Before we run scenes and everything I made sure to teach them all their individual parts and run through the music with them and the pit band,” Wurdemann said. “And just made sure that everything they need to know musically is in tip-top shape before they actually learn the on stage material.”

Due to IC Theatre Lab not being one of the official Dillingham Theater organizations, freshman technical director Jamie Correll explained that the group does not get access to the facilities or resources like the other official theater ensembles on campus.

“We don’t get to use the nice lights in the theaters and stuff that are in Dillingham,” Correll said. “We are working out of Presser Hall in Whalen so we have to try to work around other people’s schedules who also use this space. And then, finding other classrooms and stuff on campus at the right times to work just can be a big challenge.”

Shuman agreed, saying this semester IC Theatre Lab greatly struggled with finding space on campus to hold its practices and even host the final performance.

“This year, we had a really, really hard time trying to find a space for the second week of ‘Grease,’” Sherman said. “We actually had to go talk to the president of Ithaca College and the president was able to get us Emerson Suites which is really exciting, so our second production of ‘Grease’ will be on a real stage with lights and sound which is so cool, we’ve never had that.”

As a whole, all three members of the IC Theatre Lab agree that the time challenge show is physically, emotionally and mentally draining.

“One of the hardest parts of it is that you’re just tired,” Shuman said.

Despite the show facing many struggles due to the nature of it being a time challenge, there are still many exciting and enticing elements.

“I’m definitely most excited about seeing the Emerson Suites show and just how it comes together with the stage,” Shuman said. “We’ve never ever worked with that before, we are so grateful that they are letting us do this so hopefully now all of our shows will be on stage.”

While a stressor for some, Correll said there is a sort of exciting anticipation that accompanies not knowing how the show will turn out.

“So when we show up to our first rehearsal with the cast and watch them, and run through scene changes and stuff it’s really exciting when you finally get to see the product you’ve been working on come together,” Correll said.

Freshman Alecia Solorzano said she attended the show to support her many friends in the show and also because she had done Theatre Lab in the past.

“This was an amazing performance,” Soloranzo said. “My favorite part was that everyone was just having a lot of fun with it, it was contagious and I feel like even the audience got into it a little bit. It was really fun and everyone was cheering really loud.”

The good news is there is still time to catch this production of “Grease.” At 8 p.m. April 8, IC Theatre Lab will be transforming the Emerson Suites into Rydell High.

“Just come to have a good time, come to sing along and enjoy the vibes,” Soloranzo said.