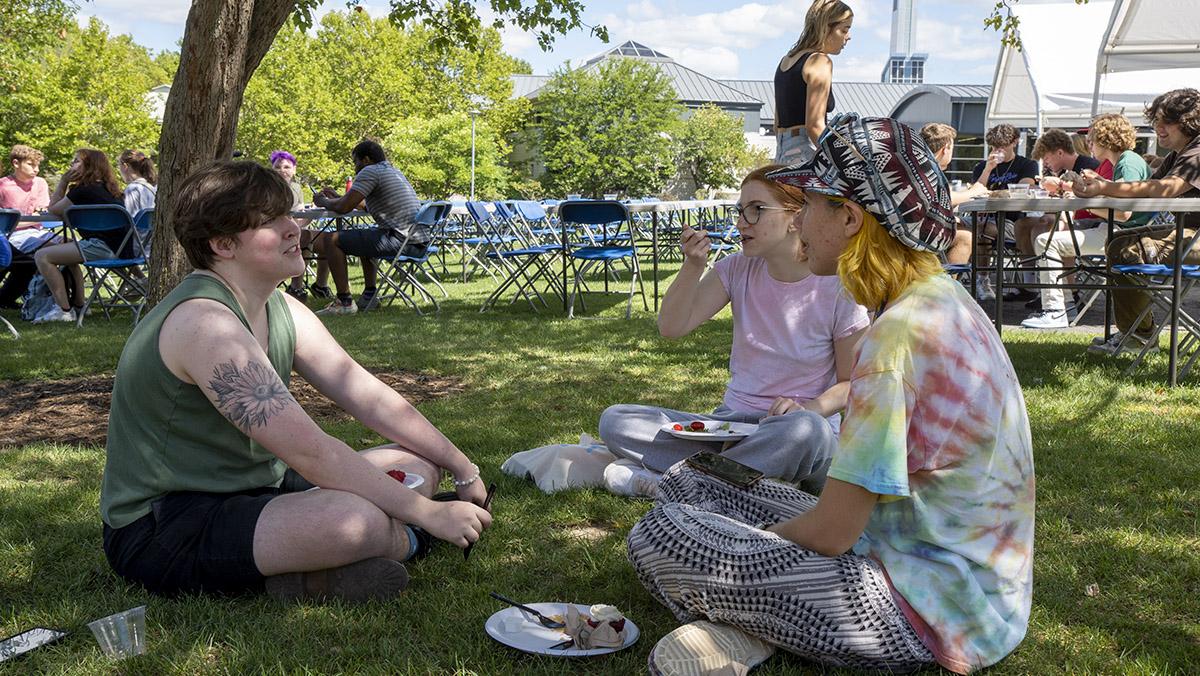 The sound of laughter and excitement filled Emerson Suites as students anxiously grabbed casino chips and tried their luck at Casino Night. The next day, students spent time outside with plates of food and iced cold drinks at the picnic on the Campus Center Lawn.

First Bomber Weekend started off with a bang as students played games at Casino Night in Emerson Suites on Aug. 26 and relaxed with a picnic on the Campus Center Quad on Aug. 27. Casino Night and the picnic are two of the events that are part of First Bomber Weekend, which is an annual program that features multiple events that take place over the course of the first two weekends of the Fall semester from Aug 27–28 and from Sept 2–4. According to the college’s website, the goal of these events is to further engage first-year students with each other and the Ithaca community. Some of the events include Hike and Swim, Mario Kart with the Office of Public Safety and a trip to the Ithaca Farmers Market. Students can sign up for these events and many more on IC Engage.

Before entering Emerson Suites, students were given a casino chip worth 1,000 casino points, which students could turn in to play games. However, once a student lost all of their casino points, then they were unable to play any more games. Students who were not interested in playing casino games played board games like Monopoly and Battleship.

Students were also given a raffle ticket, which they were then able to use to enter a raffle and win prizes, like a sewing kit, an art cart and a box of playing cards.

Junior Camille Brock, president of IC After Dark, said she was surprised by the turnout because she thought people would be tired after the first week of classes and not come to the event. However, Brock said she had over 130 people show up.

“I’m definitely excited,” Brock said. “I think it’s instilling a sense of community in this campus again, now that everyone can really be back together.”

First-year student Benjamin Boyden-Bailey said he was not sure how the college would put on a casino night, but he decided to invite his friends because he said it would be a cool experience. Additionally, Boyden-Bailey said that events from First Bomber Weekend are a great way for first-years like him to meet new people.

“I thought it was a nice way to spend a Friday night and meet new people,” Boyden-Bailey said. “It’s like a unique experience that I don’t think I would get anywhere else. I’m really excited because my friends and I dressed up. So we’re all fancy and we just want to have a good time and play casino games.”

Residential Assistants (RAs) along with volunteers also helped facilitate some of the games at the event, as they were required to sign up to work or take residents to any of the First Bomber Weekend events. Sophomore Rachel Brody was among the RAs that helped with the event. Brody said she enjoyed being a dealer for blackjack despite never dealing before this event. She said Upstate Vegas showed her and the rest of the RAs how to facilitate the games beforehand. Additionally, Brody said being a dealer was both interactive and a great way to get out of her dorm on a Friday night.

“Personally, I think college is more fun when there’s more stuff going on,” Brody said. “I think a lot of times it gets lost throughout the year, and so I think First Bomber Weekend is not only a great opportunity to, like, not only for first-years to meet people, but just to engage in your campus.”

Following Casino Night was a picnic on the Campus Center Quad on Aug. 27. Students were able to sit under the sun and eat lunch made by the Campus Center Dining Hall staff. Students were lined up with plates, ready to feast on grilled chicken, rice, sausage, salad and cupcakes. After eating their fill, some students tossed frisbees, while others sat on the luscious grass with friends or under the large white tents protecting them from the sun. Throughout the picnic, students were coming and going. Bees were curiously buzzing around from person to person.

Sophomore Jacob Makofske said he enjoyed the picnic after a long week of classes. Additionally, he said he believes that the more events the college puts on, the more students will come out of their shells.

“I definitely think, especially with the warmer weather right now, given how cold it gets at Ithaca, it would be nice to have more days like this where we have opportunities to eat outside and spend more time outdoors,” Makofske said.

First year student Maggie Schluth said she did not expect the college to put on a picnic because she said she has been focused on the first week of classes and did not know about all of the First Bomber Weekend events at first.

“I was kind of surprised by it because I was just, like, running on one of the treadmills at the gym and looking through the window,” Schluth said. “It was great seeing everyone coming together with delicious food and perfect weather.”

The remaining First Bomber Weekend events are Mario Kart with the Office of Public Safety and Emergency Management (OPS), where students will get to play with OPS at 4 p.m. Sept. 2 in the Clark Lounge and Klingenstein Lounge, followed by Grocery Bingo, where students can win grocery items in a game of bingo at 7 p.m. Sept. 3 in IC Square. Students can also take a trip to the Ithaca Farmers Market at 10 a.m. Sept. 4. The college will provide transportation via bus. The first 250 students to sign up will receive a five dollar voucher to spend on items at the Farmers Market.

Finally, Fountain Fest, which will take place at the Dillingham Fountain on Sept. 4, is an annual celebration in which first–year students throw a cup of water into the Dillingham Center fountain so that they can jump into the fountain their senior–year. Fountain Fest includes performances from the college’s a capella groups along with a fireworks show.