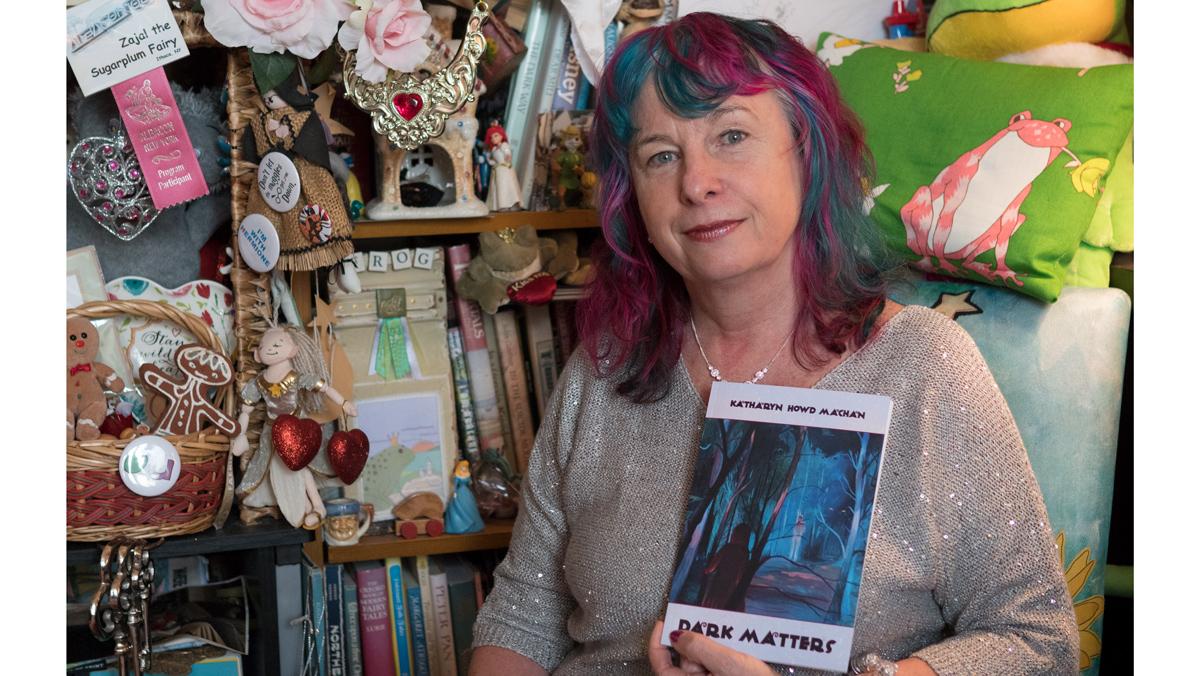 Elias Olsen/The Ithacan
Machan has published 34 books and more than 1,500 individual pieces of poetry so far as a writer.
By Madison Moore — Staff Writer
Published: December 6, 2017

Katharyn Howd Machan, professor in the Department of Writing, has released two new collections of poems, “Dark Matters” and “Dreaming Turquoise.” Published by FutureCycle Press and Red Berry Editions, respectively, these collections explore the world of mythology and tap into some of Machan’s most personal experiences.

Machan has been writing poetry since the age of 15 and started publishing in the 1970s. Machan has published 34 books and about 1,500 individual pieces, with two full-length books coming out in 2018.

Staff Writer Madison Moore spoke with Machan about her newest collections and the publication process.

Madison Moore: Can you describe to me what your two latest pieces of poetry are about, “Dark Matters” and “Dreaming Turquoise”?

Katharyn Howd Machan: Well, the one I have already is called “Dark Matters.” It’s driven by fairy tales, mythology, and it also includes autobiographical information. It was accepted well over a year ago by FutureCycle Press, which is based in Athens, Georgia, and it’s been a wonderful process working on it with an editor who kept making suggestions and changes and finding a cover artist. It’s a collection of poems, they are both called chapbooks, which are shorter than full-length collections. “Dark Matters” is 40 poems. … “Dark Matters” begins with a poem that’s a little reworking of Red Riding Hood, for example. That’s a theme I return to again and again in my work. The autobiography comes in woven in the fairytales. The sense of identifying with those female heroes and tales who perhaps were used and abused [who] had to be frightened of particularly male creatures like Little Red Riding Hood with the wolf. “Dreaming Turquoise” is one that arises from experiences, sadly, with my daughter of her surviving heroin abuse, so I’m glad she’s still alive. [There are] some dark poems in there about what it’s like to be a mother who’s not able to help someone because she’s over 21 years old.

MM: What inspired you to write these two works?

KHM: Again, the fairytale work. I write so often about fairytales, so for that one it was a matter of my going through … and figuring which ones work together, what’s going to make a collection. One [poem] seems to form the other and add, so that the whole 40 together make it larger than the separate ones. Not that all of them are the fairytale, but there’s that story–making element that seems to inform much of my poetry.

MM: Can you tell me more about the national poetry chapbook contest you won through Red Berry Editions publications?

KHM: I saw that there was a contest that Red Berry Editions was running for this 15-page thematic chapbook, and they do what’s called letterpress. They hand bind the books. It’s going to be a beautiful work of art. They should have arrived already, but the binding is taking a little longer than they thought was going to happen. This one was relatively short because they do it twice a year. And then, as I said, I’ll have the copies any day now, which is excellent. Whereas the other one, because it’s a much bigger presence, they have many more authors, it took longer for the production of that book. I do have a reading from both books set up at Buffalo Street Books at 4 o’clock Dec. 9. Giving readings is a big part of my life.

MM: What is the process like to get your pieces of work published by FutureCycle Press?

KHM: That was a recommendation to me by my good friend Barbara Crooker, who had published with them. They accepted the selected poems, which was amazing, and then said … “We just want poems that have already appeared in previous chapbooks.” They said … “We would like to publish a chapbook of your work of some of the other poems we really like so that they then can be included in the selected poems.” It’s a unique experience.

MM: What made you decide to start writing poetry at a professional level?