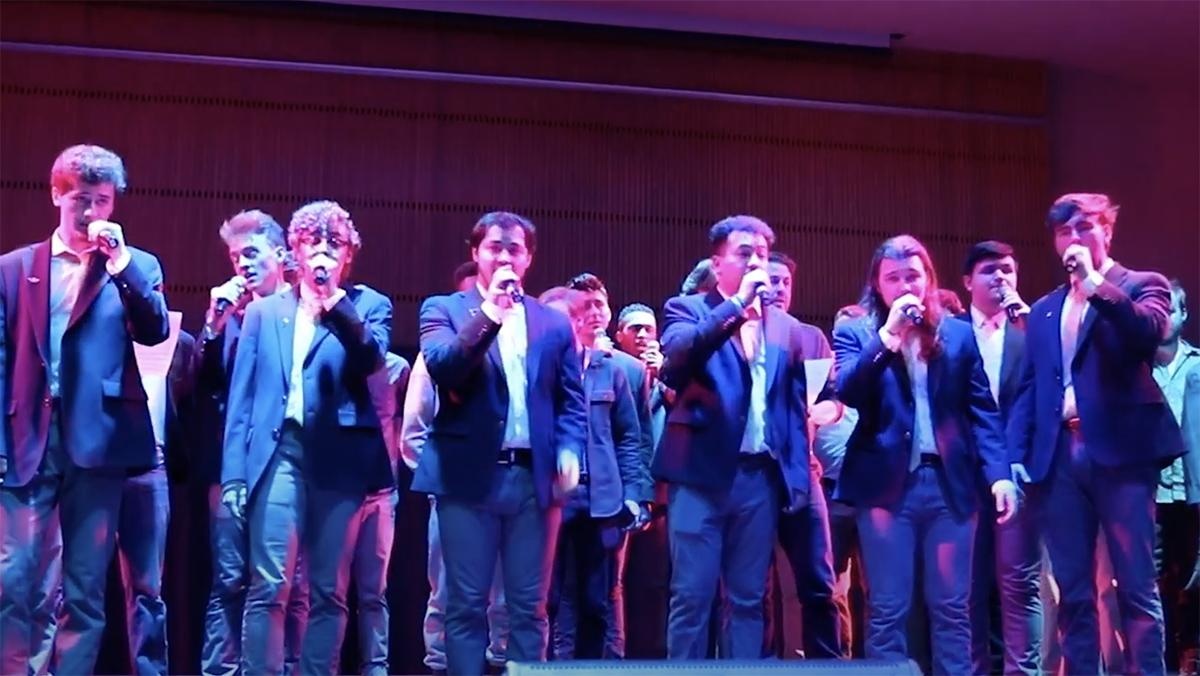 The James J. Whalen Center for Music’s Ford Hall’s stage is filled wall-to-wall by performers in blue blazers. Whether they’re planning to graduate in 2025 or have been out of school since 1997, every performer on stage knows how to end the show. 25 years of Ithacappella performers begin to harmonize and sing the iconic closing song, “Goodbye, My Coney Island Baby.”

Ithaca College’s first ever a cappella group met in celebration of its 25th anniversary from April 1 to 3. The three-day event honored the group’s history with performances and appearances from alumni members, many of whom were inducted into the Ithacappella Hall of Fame at the end of the weekend. The 25th anniversary of Ithacappella was last year, though the community is celebrating now as COVID-19 conditions become less harsh.

Ithacappella has seen massive success in the performance world since its founding in 1997. The group performed in the finals of the International Championship of Collegiate A Cappella back-to-back in 2008 and 2009. The group is also often recognized for its high-quality studio recordings, having received nominations for “Best Collegiate All-Male Album,” “Best Male Soloist” and “Song of The Year” during 2011’s Contemporary A Cappella Recording Awards (CARAs).

The commemoration of the group’s legacy began with its current members at its Block IV Concert in Emerson Suites on April 1, where the group showcased performances members had been working on over the past few weeks. The event boasted a high attendance with an excited energy. Members of the group performed a few songs they’d debuted at earlier concerts, like “Accidentally in Love” by Counting Crows and “Lay Me Down” by Sam Smith. The group’s new numbers included a medley of pop band Maroon 5’s biggest hits and Gnarls Barkley’s 2006 song “Crazy” among others.

Freshman Jaiden Collier performed “Crazy” as a solo during the Block IV concert.

“The week before the performance was actually very exhausting,” Collier said. “Actually singing it with the boys made it all worth it, there’s nothing like singing with friends and making people happy.”

Collier said joining the alumni on stage created a new musical sensation in comparison to the group’s average solo and group performances.

“There’s this idea in a cappella called the ‘ringing chord,’ which refers to the unison of many voices into one,” Collier said. “Being a part of something like that was, for lack of a better word, transcendent!”

Alumni members of the group were invited on stage toward the end of the show to debut an original song by Jacob Kerzner ’18 titled “We’ll Be Here.” The performance of an original composition was unique for Ithacappella, as the majority of the group’s music consists of song covers.

Sophomore Ben Stroud is a member of Ithacappella and found the return of past alumni to be a unique experience for the group.

“All the alumni came up and sang Jacob Kerzner’s new song with us,” Stroud said. “It was admittedly a little chaotic at first, but still super cool to have multiple generations of Ithacappella singing all together during one of our concerts.”

Following Friday’s concert, the Ithacappella community met once again in Ford Hall for another concert, during which two members from each “generation” of Ithacapella gave speeches about their past experiences and lessons learned from their participation in the group.

This event didn’t draw in nearly as many spectators as the first, functioning more as a private and personal opportunity for alumni to perform more music with Ithacappella’s current members. The event’s calmer, casual energy was reflected through the music that alumni and students performed together, which focused more on choral music in favor of the high-energy pop tunes Ithacappella tends to sing at its usual concerts. The choral performances better reflected the music that earlier generations of Ithacappella usually performed in their day.

“The second concert was more lowkey, with alumni performing most of the time,” Stroud said. “It was really cool to meet a lot of the older guys and hear their Ithacappella stories from 10, 15, even 20 years ago.”

The 25th anniversary celebration was made possible by Ithacappella’s alumni association, which was founded in 2009 by Greg Harris ’07. Since then, the group has continuously supported the current members each year.

Don Ferlazzo ’05, alumni and Ithacappella Hall of Fame inductee, has been an active member of the alumni association since its creation in 2009. According to Ferlazzo, what started as a small group visit back to Ithaca became a hugely involved association.

“[Harris] thought it’d be great if we came back every year for Ithacappella’s last concert, where we would simply attend the show. Then it was a reception, then we started getting onstage with them — it just kept growing,” Ferlazzo said. “The biggest point was our 20th anniversary when he had the original founding members come and inducted them into the hall of fame.”

Caleb Wheldon ’03 is one of the alumni recently inducted into the Ithacappella Hall of Fame. Wheldon agreed that the 20th anniversary celebration marked a huge step in how involved alumni would be from that point on.

“The biggest interaction I’ve had with past alums was five years ago, when we celebrated the 20th anniversary,” Wheldon said. “[Ferlazzo] is good at camaraderie and getting people excited about coming back. At this point a lot of alums have gotten to know each other, which is really great.”

While the alumni association has always been closely involved with current performers, it occasionally faces challenges on behalf of Ithacappella being a student-run organization.

“Ithacappella has new leadership every year,” Ferlazzo said. “Some years they’re so easy to work with, and other years it’s a challenge even getting in touch.”

Despite issues in the past, this year’s event was planned swiftly and efficiently thanks to the effort and commitment of current board members.

“The group’s current president, [junior] Christian Castro, is an excellent communicator and is really well organized,” Ferlazzo said. “In many ways, this anniversary celebration was easier to plan than our 20th because this group just brings so much to the table.”

The celebratory weekend gave returning alumni the unique chance to get to know the current members of Ithacappella and see how things have changed.

“I got a chance to sort of meet and hang out with the young guys earlier,” Wheldon said. “I just think it’s amazing to be able to stand in the same room with people who are in school now and singing the same music I did 20 years ago.”

The weekend’s closing event brought festivities to the Hotel Ithaca, where selected alumni were inducted into the Ithacappella Hall of Fame during a private banquet. The Hall of Fame was created by the Ithacappella Alumni Association in 2016 during the 20th anniversary event for the purpose of commemorating the achievements of Ithacappella alumni. In 2016, the founding alumni of the group were inducted. Inducted members must have been removed from Ithaca College for at least 10 years and must have passionately and effectively contributed to the good of the group during and after their time in school. The Ithacappella Alumni Association only does inductions every 5 years.

Ferlazzo, Wheldon, Harris and Anthony Maiese ’01 received the honor in the presence of the current group of performers. 25 alumni in total visited Ithaca for the event.

“It was a ton of fun and an incredible honor to be inducted,” Ferlazzo said. “So far there’s only been 9 people in our 25 year history inducted into the Hall of Fame. I’m excited that I get to be inducted with [Wheldon], who’s someone I sang alongside as a student.”

Wheldon said he was surprised and appreciative of his induction and that being recognized by both past and present members of the group is really exciting.

“I’ve been telling everyone I know I’ve been inducted into the Hall of Fame!” Wheldon said. “I love being here, and I think it’s important for a group that’s been around for so long to honor its past.”