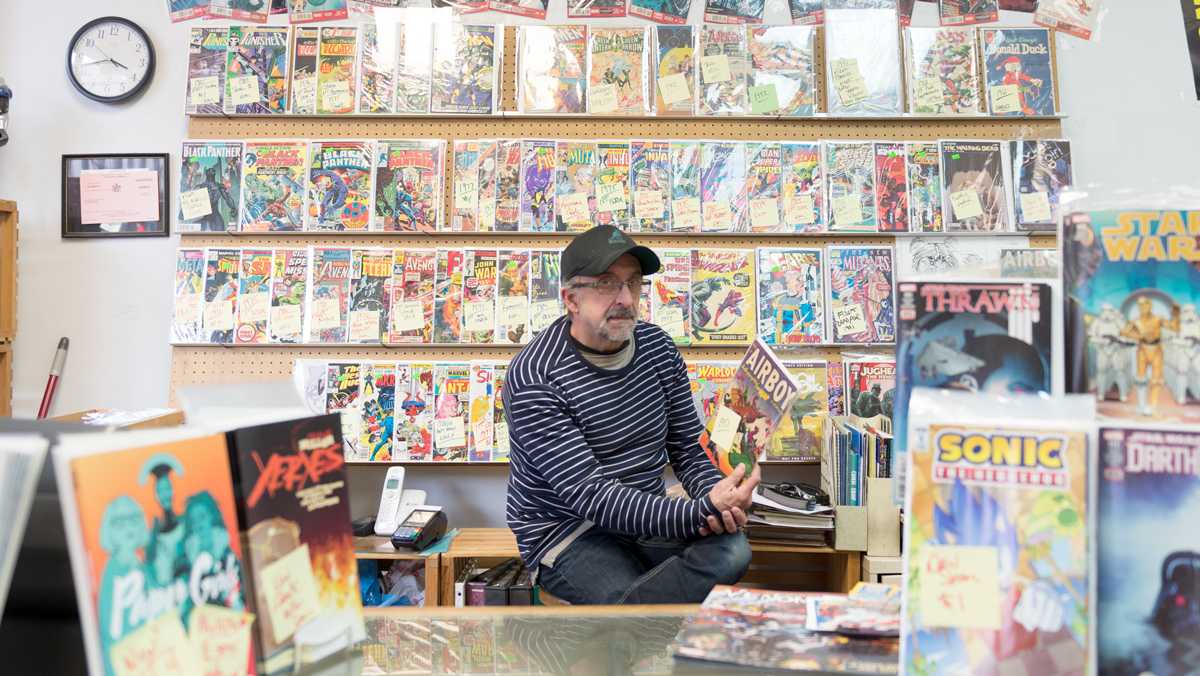 Sam Fuller/The Ithacan
Tim Gray is the owner of Comics for Collectors, a comic book store located on the Commons which recently expanded.
By Antonio Ferme — Staff Writer
Published: May 2, 2018

For over 35 years, Comics for Collectors has served the Ithaca community as a place to browse, buy and discuss comic books. Located on North Aurora Street, the independently owned comic book store recently expanded into the empty space next door. With this expansion, the comic book store now has the ability to add a kid-friendly section and display more graphic novels.

Comics for Collectors is a small shop, but it gives off a snug and comfortable vibe. The walls are covered with vibrant and colorful posters, and the shelves are stocked with a wide variety of new and old comics. Every customer who walks into the shop seems relaxed, almost like they are at home. This feeling of contentment is what Tim Gray has been trying to maintain ever since he opened the doors of the shop back in 1981.

Gray said he has been interested in collecting comic books for most of his life. Before opening his store, there was a number of retail stores that would sell comic books on racks, but owners would not know the difference between an Archie and a Spider-Man comic. After Gray started collecting these comics, he said, his extensive knowledge and passion regarding the industry led to him opening up a shop of his own. Since then, comic book stores have become more scarce. Gray said he is thankful that his shop is located in such an ideal location.

“Nowadays, bar and restaurant businesses have become a lot more lucrative, and they are able to pay the higher rents,” Gray said. “This doesn’t mean that a comic store can’t exist, but you have to find the right location.”

Gray also discussed how his store has to adapt to change as comic book readers become more accustomed to buying graphic novels that contain multiple issues rather than buying single issues individually. With this change, Gray decided that the shop needed more room, and he ended up purchasing a space next door.

William Lewis has been shopping at Comics for Collectors since he was a young boy and is now a part-time worker at the shop when he is home from college. He said more space was needed after the shop began carrying a wider range of items.

“Once we started branching out into graphic novels and games, we really needed some more space to keep things organized,” Lewis said.

Lewis said he has learned a lot from Gray’s unparalleled knowledge of comic books.

“He can at least tell you about the quality of every series and how it was received at the time of its release,” Lewis said.

The comic book industry has been changing due to the trend of purchasing and reading comic books online rather than heading to the store to pick up a physical copy. While this has discouraged many comic book store owners from staying open, Gray said he believes there are enough stable consumers in the community to keep the shop running strong.

“If there’s a dedicated amount of customers that believe a comic book store is worth keeping around that you can walk into, chat with people that share the same interests as you, and be able to browse around and purchase some comics, that’s how we’ll stay in business,” Gray said.

Lauren Valchuis said she has been an employee at Comics for Collectors for almost three years. She said that when she was hired she had almost no knowledge about the comic book industry. Now, she has immersed herself in the colorful world of comics and is up-to-date with pop culture. Valchuis said the expansion was something that was necessary to keep the store’s growth flourishing.

“It’s exciting because we have a lot more space to display things, which is important because you want to be able to display every cover and every collectible,” Valchuis said.

Lewis said Gray has done a great job adjusting to the changes in readership over the years.

“The things with comic book shops nowadays is that it’s not just comics anymore — it’s that whole culture around superheroes and pop culture,” Lewis said. “In order to succeed, you have to try and manage all of that at once, and Tim has done that very successfully.”