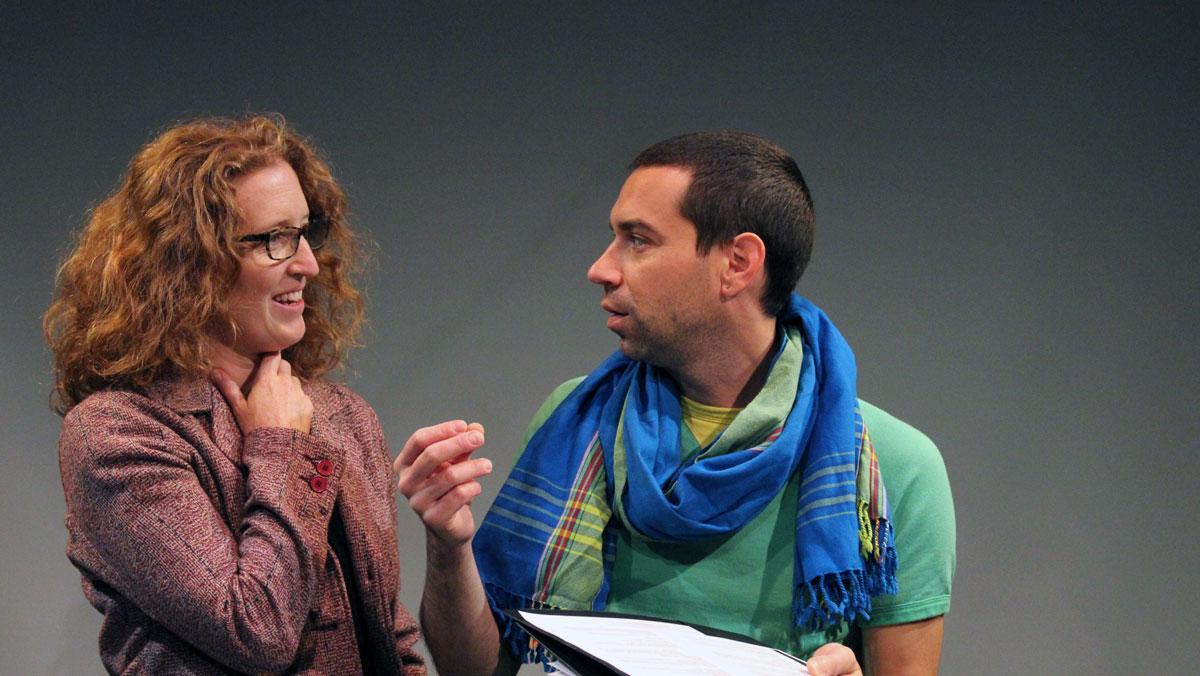 A single actor stands in the middle of the Kitchen Theatre, surrounded by empty seats. He rehearses a scene for two people, talking to the air next to him, imagining an audience member standing in its place. In a few weeks, the second half of the cast — the audience — will walk in and receive slips of paper with their lines on them and begin the first performance of the play “Every Brilliant Thing.”

“The title refers to a list of every brilliant thing,” Wendy Dann, director and associate professor in the Department of Theatre Arts, said. “The list is started by a young boy when his mother tries to take her own life and he hears that she can’t think of anything worth living for.”

The play was written by British playwright Duncan Macmillan and comedian Jonny Donahoe in 2015, and a performance of the play starring Donahoe was aired on HBO in 2016.

“Every Brilliant Thing” focuses on the life of the narrator, a man who tells the story of the list he started at age seven of everything that he thinks makes life worth living. The narrator guides the audience through his life following the creation of the list, acting out the pivotal moments in his life that cause the list to change and expand.

“I read it and it terrified me because it’s a very difficult thing to do, and that made me want to do it even more,” Gregory said. “That’s a very different type of interaction than you usually have with an audience. From night to night it will change and it will be a slightly different show.”

As the show progresses, the narrator calls out a number and the audience member with it will read their line. Some stay in their seats and read a line of dialogue or item on the list, while others are brought onto the stage to act as a character in a scene, such as a therapist or the narrator’s love interest.

“I had never read anything like it where the audience is actually a character in the play, and I love plays that are highly theatrical in that way,” Dann said. “There’s no way this play could be a movie. The way that it’s written, it’s very difficult for it to be anything but a play. You have to have the audience there.”

Because the audience changes every night, the play differs each time it is performed.

“When you come to the play, it’s kind of a choose-your-own-ending play,” Dann said. “You could come two, three times in a row and you could see a different play, because it’s all about who he casts in all these different parts.”

To encourage audience participation, the Kitchen Theatre itself was reformatted for the show. While the space usually sets the audience on three sides for performances, this play will have audience members on all four sides surrounding the stage. This format of the audience being “in the round,” as well as no set and minimal lighting design, is specified in the script.

Steve TenEyck, scenic and lighting designer and associate chair for the Department of Theatre Arts, used a scene that takes place in a support group as inspiration. The creative team wanted the circular seating to invoke the inclusion and open communication that can be found in a support group.

“We wanted a space where the audience could be connected to the actor in ways that I haven’t seen in the Kitchen Theatre in a long time,” TenEyck said. “The playwright talks about the audience’s relationship to the actor as being ‘democratic,’ so we spent a lot of time talking about what that meant.”

The play addresses depression and suicide. At the same time, the narrator’s stories can be comedic, especially during moments when the audience is involved.

“There are moments where there’s a lot of comedy and audience involvement and right next to it, we’ll drop into a very, very serious moment, which is hard to navigate as an actor,” Gregory said. “But that’s the great challenge of being an actor — to put these two things next to each other and be able to take the audience on this kind of journey.”

Dann said that when the play was first performed, the actor playing the narrator was also a stand–up comedian. The playwright took notes of the comedic elements that were incorporated and revised the script to include them for future performances, making the audience more comfortable when discussing the sensitive topic of depression.

“The juxtaposition of a very serious topic with humor, I think, is the way that people cope,” Dann said. “When we are in the midst of a very difficult situation, we tend to laugh. If you look all the way back to the Greeks, in an evening of theater they would have tragedy, but they would also have satire … and that was a very healthy way to work out any social topic.”

“Every Brilliant Thing” runs Nov. 11 through Dec. 10. Tickets can be found at www.thekitchentheatre.org.

Ronica V. Reddick ’03 returns to Ithaca this month to play Barbara in “boom” at the Kitchen Theatre Company. A native of Syracuse and graduate of Ithaca College’s acting program, she performed in shows at the college including “November Girls,” “The Colored Museum” and “Goodnight Desdemona (Good Morning Juliet).” Since graduation, her credits include several…