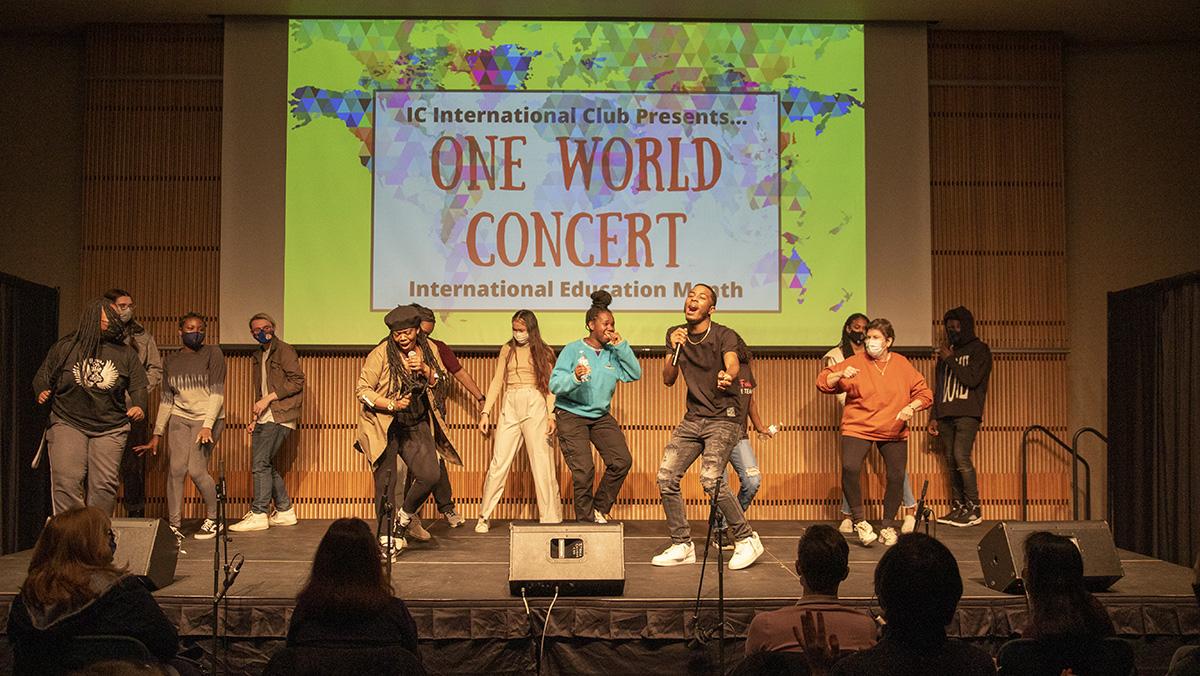 Brendan Iannucci/The Ithacan
The IC International Club hosted its annual One World Concert on Nov. 5, where different cultures from around the world were celebrated.
By Mike Ross — Staff Writer
Published: November 10, 2021

Ecstatic crowd members cling to the edges of their seats as senior Nelson Wu’s diabolo — a Chinese yo-yo — zips across the stage at seemingly impossible speeds. Wu launches the diabolo toward the ceiling once more, effortlessly catching it on its string to excite the audience one last time before concluding his performance at the 2021 One World Concert with a humble bow.

The crowd’s applause jolts across a dimly lit Emerson Suites as the next set of performers are introduced, those which will have an entirely different sound and style than the last. From Caribbean to K-pop, audiences don’t know where in the world the next performance will take them until it starts on this tour of global talents.

The show’s opening act was a heartfelt solo performance from senior Bea Tria, who sang a Filipino song called “May Bukas Pa.”

“It means ‘There’s Still Tomorrow,’” Bea said. “It was actually the theme song for a Filipino drama that I watched when I was a kid, and I always liked it.”

The conclusion of Bea’s performance was followed by a stark change in atmosphere. Accompanied by the fade–in of a hip-hop beat, the Ground Up crew took the stage for a high-energy breakdance session.

Junior Connor Chin and senior Jay Lin are the co-presidents of the college’s breakdancing group, Ground Up. Ground Up’s performance is fitting to the One World Concert, as breakdance has a deep cultural history.

Breakdancing occurred in the South Bronx starting in the 1970s, and grew relevant in the evolving culture of hip-hop music and fashion. This hip-hop style would spread to other parts of the world as American television became more accessible globally, and was especially popular in East Asian countries like South Korea and Japan.

“Historically we have performed at One World pretty often, it’s like a tradition,” Chin said. “Breakdancing is usually [considered] an African-American thing, I like to think we put a bit of an Asian twist to it.”

Having only seen two performances so far, the One World Concert’s audience has already been exposed to performances with meaningful cultural contexts. Junior Ahmed Alghamdi, a member of the International Club’s creative team, attributes this to the college’s international community members.

“There’s a lot of variety,” Alghamdi said. “The international students are mixed from everywhere in the world. It’s really reflected in the music and dance.”

The college’s all-male identifying a cappella group, Ithacappella, appeared with a handful of covers, including a performance of Stevie Wonder’s “Sir Duke.” Ithacappella was the first of two a capella groups to perform, with the all-female identifying Premium Blend performing in the show’s second half. Premium Blend also performed a number of cover songs, which junior Sammi Frieri, the group’s president, refers to as the “staple tracks.”

“I just love that so many performers from campus are being showcased,” Frieri said. “It’s such a rich pool of entertainment and talent.”

Staying true to the event’s theme, performers from outside the Ithaca College community were welcome to celebrate global cultures as well. Cornell University’s own Teznia Bellydance Troupe appeared in the show’s first half, bringing with them an authentic celebration of the Egyptian and Middle Eastern style of dance with both solo and group numbers.

Wu and his diabolo performance was the concluding act of the show’s first half. Wu was the only performer to present something outside the realm of song and dance, and his performance carried a high energy that viewers would bring with them in the second half of the show, which followed a five-minute intermission.

Premium Blend was first to the stage in the second half before passing the baton to the Island Fusion Dance Team.

Island Fusion Dance Team was founded in 2014 and is Ithaca College’s only Afro-Caribbean dance group. The group carried out an explosive mix of styles and cultural influences in its performance, infusing the foundational choreography of hip-hop with Afro-Caribbean genres like reggae and calypso.

Sophomore Jae Williams has been dancing for the Island Fusion Dance Team since September 2021.

“I saw the Island Fusion Dance Team perform at Fountain Fest, and their mix of genres really caught my attention,” Williams said. “I am glad I took the risk and auditioned because it’s been really fun.”

Williams said he was drawn to the group’s stylistic versatility because the team focuses on Afro-Caribbean music while incorporating different styles.

“For the One World Concert, we performed one Caribbean song, one Spanish song and one hip-hop song,” Williams said. “Since the concert was focused on different cultures, we wanted to show off dances that incorporate different cultures and represent what Island Fusion is really about.”

The concluding act of the event was none other than IC Unbound, the college’s largest and longest-running dance company. The crew leaped, spun and dashed across the stage in three separate performances, each containing a new set of dancers to embrace the group’s immense strength in numbers. After the last IC Unbound group finished its rhythmic performance to the accompaniment of Ru Paul’s “Supermodel (You Better Work),” the One World Concert came to a close.

The show was emceed by junior Déontae Guy and senior Thais Gutierrez.

“The International Club team reached out to me asking me to host,” Guy said. “I then sat down with [Gutierrez] and planned a few activities, and just went off of the crowd’s energy throughout the night.”

Throughout the event, the two hosts initiated some crowd engagement with activities like a singalong to Vanessa Carlton’s 2001 mega-hit “A Thousand Miles,” a dance battle, a raffle giveaway and more.

The hosts selected attendees from the crowd to participate in the games between every few acts. William Streleckis ’21 was the winner of a game of musical chairs.

”It’s a really great energy, creating a space where everybody can have fun and express their talents and passions,” Streleckis said.