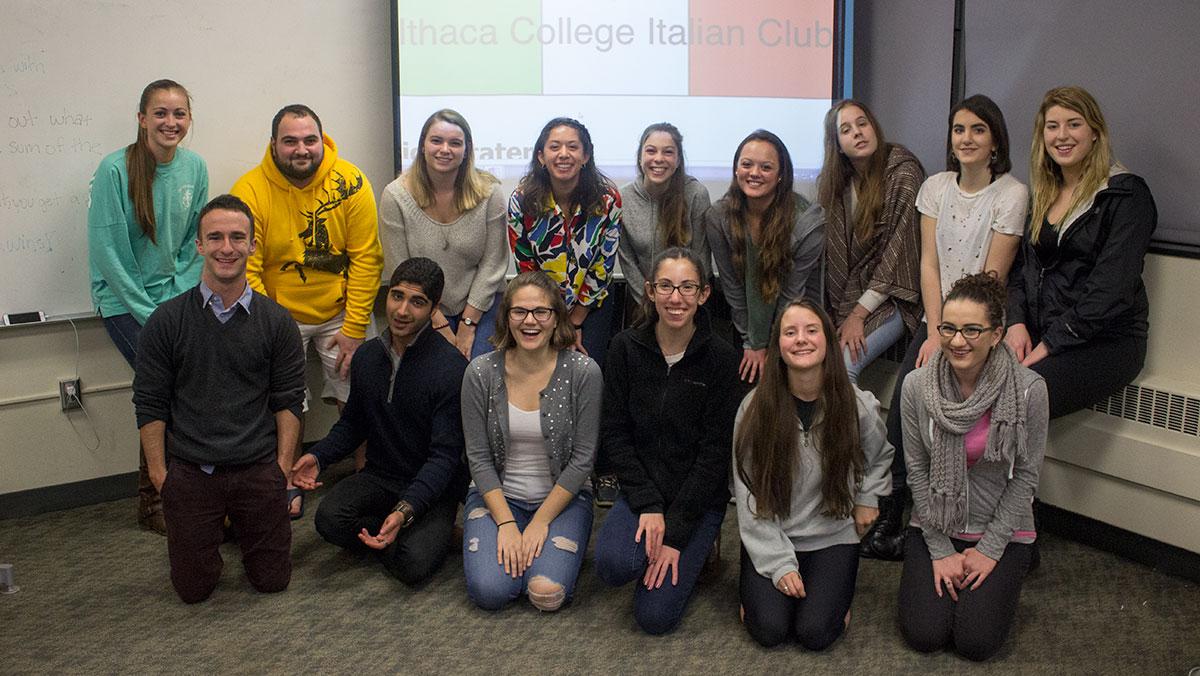 Karielle Williams/The Ithacan
Members of the Italian Club pose at their first group meeting Oct. 20. The club has been facing difficulties becoming official since last year after members of its intended executive board graduated or studied abroad.
By Kalia Kornegay — Staff Writer
Published: October 21, 2015

With an Italian opera radio station playing through someone’s Pandora music app and boxes of homemade cannolis, the Italian Club successfully held its first meeting of the year.

The meeting was Oct. 20 in Friends Hall, Room 201, with about 20 students attending. As new members walked through the door, they were greeted with “Ciao!” and a smile from each of the excited executive board members. An Italian counting game called “Morra” was used as an icebreaker after initial introductions.

The meeting marked the end of a long club-formation process, which began last year when a group of students wanted to create an Italian Culture Club. Because the student who intended to be president graduated in 2015, the club had to rethink its leadership before being officially formed. President Nicole Veltri, a sophomore, said she decided to actually create the club during fall of last year and started setting things in stone in the spring.

“I came to Ithaca thinking there’d be an Italian club on campus because there’s an Italian minor, and it turns out there was not,” Veltri said. “After talking to some people who were also of Italian background, they said I should start an Italian club, and everyone showed so much interest in it, so I figured I should do it.”

Treasurer Isabella Ionni, a junior, became involved with the club after Veltri sent out an email to students taking the Italian language courses asking for interested students. Ionni said they were sure to be thorough in attracting members to their club so that history would not repeat itself and the club would continue next semester, when two of the executive board members will be studying abroad.

“We’ve really tried to prepare ourselves before our first meeting,” Ionni said. “We’ve met a bunch of times, making sure we have everything in order. We’re also making sure it’s properly advertised. … Nicole wants to make sure that when she graduates, the club will continue. I’m helping her as much as I can because I’d love to see the club continue when I graduate as well.”

Ionni, along with the rest of the board, had never been on the executive board for a club before. She said forming the club and keeping it afloat has been, and continues to be, a learning experience.

“I realized that there are a lot of things entailed when making a club, especially when all of the e-board members have never done it before,” Ionni said. “It’s hard to get things up and running quickly because everyone’s basically figuring out how to use OrgSync.”

Veltri said she hopes to have a highly interactive aspect to the club in the form of field trips and events. There is a scheduled trip to see an opera on Sunday, and she said they’ve discussed hosting a “pizza-off” where students can judge local restaurants’ pizzas. Another possible event would be a bocce tournament — bocce is an Italian game that involves trying to roll a ball into a specified area on a playing field.

Freshman Micol Wajskol said she decided to attend the first meeting of the club because she was unable to take an Italian-language course this year but still wanted to continue speaking the language regularly. Her father is from Italy, and she said she’s always been around Italian culture when she was growing up.

“I heard about it from the Org Fair,” Wajskol said. “I want to be able to keep up my Italian because with languages, if you don’t practice them, you’ll lose them. I thought I would be able to speak and learn more about the culture, too.”

Despite the setbacks around its initial formation, the Italian Club was able to attract a diverse group of students. Freshman Carolina Gaudenzi is from San Marino, a small country surrounded by Italy, and came to the club after hearing about it in her Italian course. She said she’s lived in San Marino her whole life and hopes to find another Italian environment on campus.

“I don’t know what to expect,” she said. “Probably there will be a celebration of the Italian culture. Personally, I’m here to feel at home.”