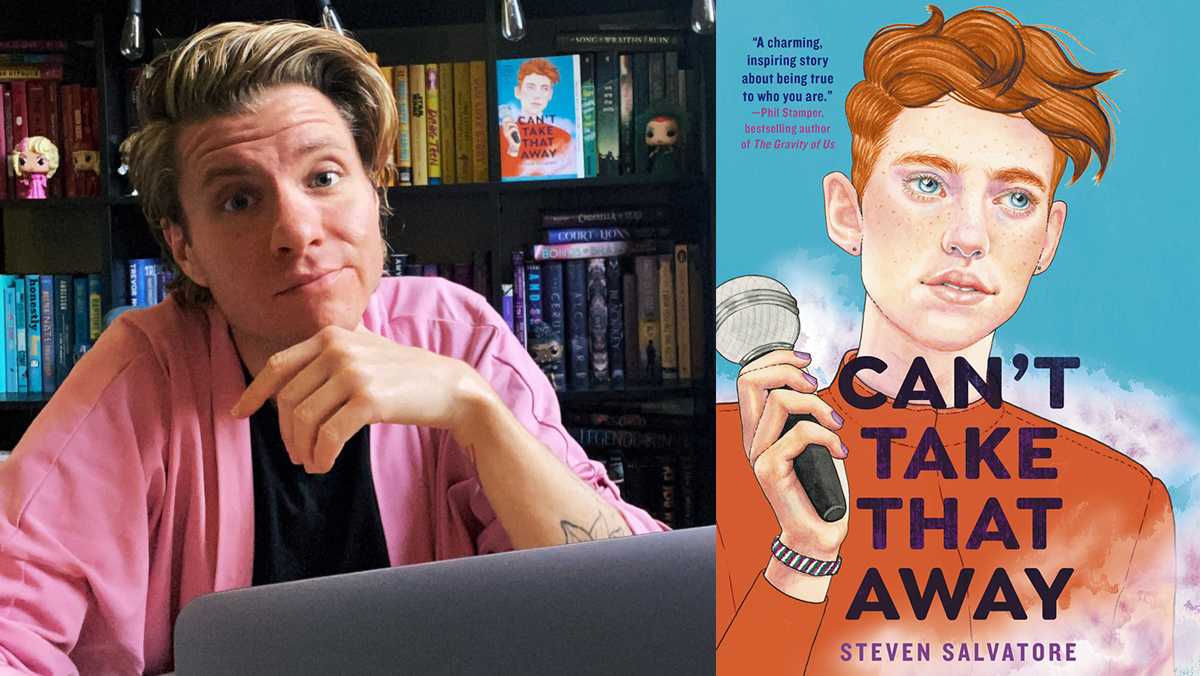 Courtesy of Steven Salvatore
Salvatore’s most recent accomplishment is the upcoming publication of “Can’t Take That Away,” which will be released on March 9.
By Molly Sheets — Staff Writer
Published: March 3, 2021

Carey Parker is standing on the stage, their diva-like voice filling the entire auditorium. Tears fill their eyes at the end of the song, realizing that they can no longer sing it in the Sunnyside High School production of “Wicked” due to the discrimination they face at school for their identity. This is the plot of Ithaca College alum Steven Salvatore’s debut book, “Can’t Take That Away.”

Salvatore, who graduated in 2008, has always enjoyed writing, and they are currently an adjunct professor at colleges in Westchester County, NY. Salvatore’s most recent accomplishment is the upcoming publication of “Can’t Take That Away,” which will be released on March 9. The book has been ranked 25 on Amazon’s Teen and Young Adult (YA) Theater Fiction.

The book follows Carey, a genderqueer teen. Carey auditions for the typically-female role of Elphaba in their high school production of “Wicked.” They get the part, but are eventually kicked out of the musical after a series of prejudiced actions from a teacher and classmate. Carey and the rest of their friends then rally in protest and attempt to get Carey reinstated as the lead.

Salvatore said writing the book was a good way to process their own genderqueer identity.

Through personal experience, Salvatore said they were able to understand the emotions and struggles that come with being a genderqueer teen. Salvatore is hoping that queer young adults can see that they have a voice and can overcome prejudice as well.

Salvatore’s book is coming at a time when LGBTQ characters in YA literature are becoming more prominent, but still remain in the minority. Mainstream publishers published 108 LGBTQ YA books in 2018, according to writer and researcher Malinda Lo. However, according Lo’s report, only 4% of these books had a nonbinary or genderfluid main character.

Salvatore said they hope that their book sparks an increase in the publication of more LGBTQ forms of media.

“I can’t name another published young adult book that has a genderqueer main character,” Salvatore said. “There’s something wrong with that. So then that means that my book then represents everybody who is genderqueer, which is inherently problematic because my experience is not a universal experience.”

In 2007, Salvatore took the Writing Children’s Literature course at Ithaca College. This course sparked Salvatore’s interest in YA literature, jump-starting their career in composition and writing.

“Taking that course actually opened my eyes to all the possibilities of YA,” they said. “Young adult literature tackles stuff that adult fiction doesn’t with the same amount of depth and nuance. In young adult fiction, it’s more poetic.”

The Department of Writing at the college has not only helped Salvatore learn about their passion, but to understand their identity.

“When I was at Ithaca, there was an out professor that I knew in the writing department,” they said. “This made me feel safe and comfortable. It allowed me to see that I want to teach college writing one day, and I can actually have that.”

Rachel Fomalhaut, lecturer in the Department of Writing, teaches Queer Studies at the college this semester. The class includes large and small group discussions that highlight topics like queer history and sexual identities throughout time. Fomalhaut said she believes that books like “Can’t Take that Away” and classes like Queer Studies help students further understand who they are.

“Since all my characters are queer, I resonate with them,” they said. “It feels cathartic in a way, to write as someone who is not me, and have their situation be different.”

Prince is currently working on a queer YA fantasy novel inspired by “Cinderella.” The novel features magic, a childhood friends-to-lovers romance and the relationship between selfishness and self-preservation.

“Most of my characters need to figure out who they are and who they want to be,” they said. “Those are oftentimes two different things.”

Although Carey’s story has some hardships, Salvatore said that good things come out of hard times, a testament to their personal life experiences.

“There’s a lot of pain and there’s a lot of hardship that Carey experiences in the book, but there is a balance between the darkness and the light,” they said. “Even though there are painful moments, there is also a lot of hope, and it’s empowering.”