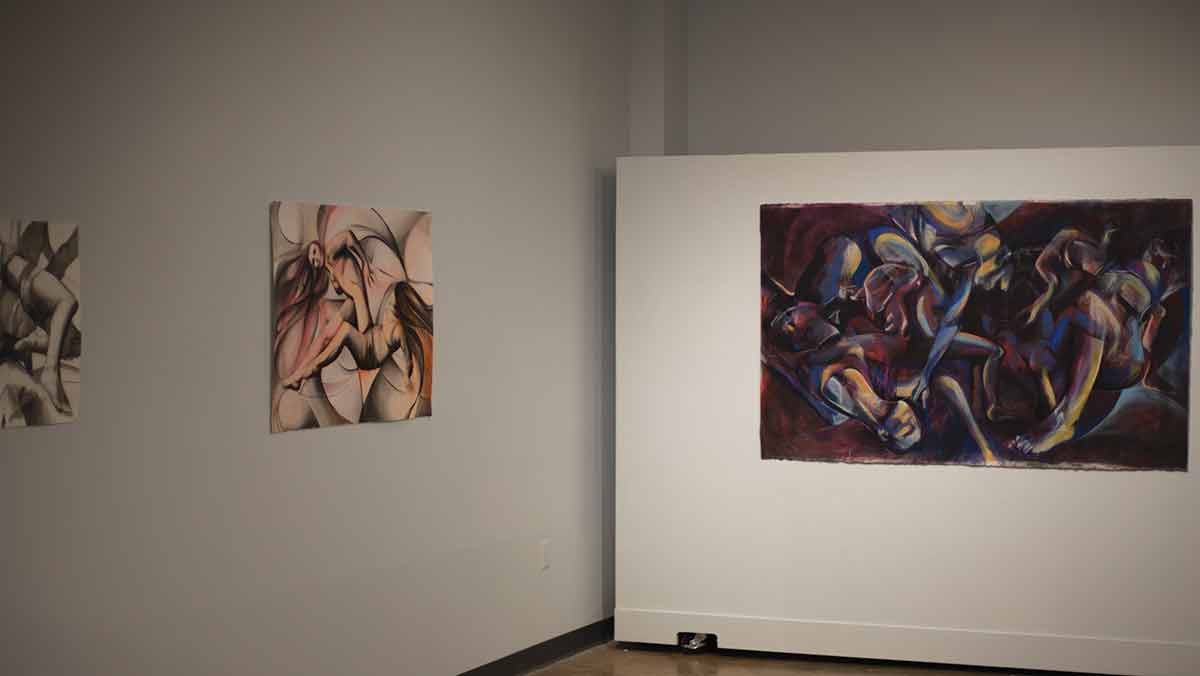 The walls of the Creative Space Gallery, located on The Commons, tell a story of inner conflict through a contrast of light and dark colors in its current exhibition, “Mind vs. Body.” The series of paintings by Carolyn Hoffman ’15 premiered on Feb. 5 and will be showcased until Feb. 28.

“I’d seen some of the work beforehand and wanted to give her the opportunity to show it on a larger scale,” Hastings said.

The gallery often showcases the work of current students in the Theories of Art Practice class, Hastings said. The class is all about the “personal and professional development of studio artists” and covers all aspects of making a living as an artist. The students’ final projects are showcased at the gallery.

Many of the pieces in the “Mind vs. Body” exhibit are a result of Hoffman’s senior thesis project. She said she began working on the pieces in the Fall 2015 semester and continued sporadically throughout the year.

“I worked on them and put them away for weeks or months at a time and then continued them later,” Hoffman said. “I didn’t work from start to finish because I wanted everything to be cohesive, and it helped by working on each at the same time.”

Hoffman portrays motion in her work through the several body movements and gestures that are incorporated into each piece. The movements are depicted through streaks of both light and dark colors. Hoffman said she used herself as a model for the pieces by taking pictures or videos of herself performing these movements and later sketching them.

“My pieces are representative of me, but they’re not necessarily self-portraits. I want people to be able to relate to them,” she said.

Junior June Ota, an intern at the gallery, said she admires the way Hoffman depicts motion through her paintings.

“I love how she’s able to create movement in such a way that it looks seamless and dynamic,” Ota said.

Hoffman said she drew much of her inspiration from her own psyche. A great source of inspiration for her was moving away from home and living on her own when first coming to college. She learned much about herself and had many new experiences, she said.

“These pieces explore the self-deprecation that results when one’s state of mind overpowers those that are more vulnerable,” she said.

By looking at her paintings, Hoffman said she wants others to be able to relate to her and her experiences.