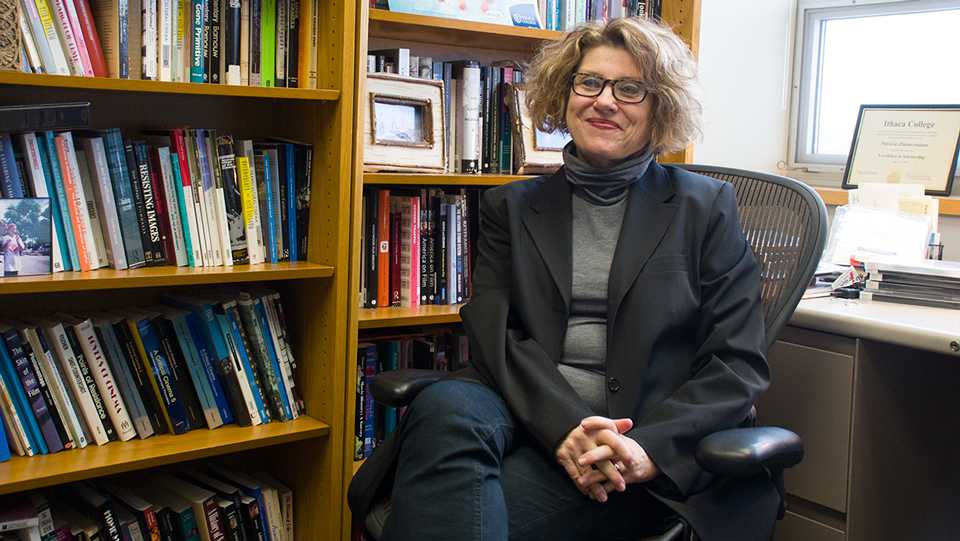 Sam Fuller/The Ithacan
Patricia Zimmerman, professor at Ithaca College, was chosen to serve on the International Documentary Association Awards, an organization that looks at documentary in the world.
By Kayla Dwyer — Opinion Editor
Published: February 16, 2016

Patricia Zimmermann, professor of media arts, sciences and studies and co-director of the Finger Lakes Environmental Film Festival, was appointed to serve on the International Documentary Association Awards Jury for short-form series in new media in Fall 2015 — a post that, due to its prestige, is kept secret until after the awards are given.

This is the second time she has served on this jury. Opinion Editor Kayla Dwyer spoke with Zimmermann about the significance of the organization, innovative forms of documentary and what students should learn from it.

Kayla Dwyer: Could you put into perspective, for those who may not be cinema-inclined, the significance of the International Documentary Association Awards?

Patricia Zimmermann: The International Documentary Association is the largest association for documentary in the world, and it is an organization that advocates for and discusses and analyzes the state of documentary in the world. There’s the Academy Awards, which are for the commercial film industry, that are produced by the Academy of Motion Picture Arts and Sciences, which is the trade association that was developed by the five major studios in the 1920s. So the International Documentary Association is like AMPAS, but for people in the world of documentary. … One might think what really matters is getting an Academy Award, but in the world of documentary, there are other kinds of awards. IDA is the most internationally significant. There are awards for courage in documentary filmmaking, for human rights; there are awards named after famous people in documentary; there are awards for theatrical feature, for short series … for short TV series with a presenter. There are many different categories. … It’s not helpful to split the world into commercial versus independent or art versus whatever because people who work in these realms — they speak many languages of documentary, and they move between all of the sectors, and of course these sectors look different depending on what country you’re in. … So that’s what IDA is — it’s a very, very important organization, and it’s for every facet of this documentary universe. Just a little fact: There are more documentaries produced around the globe than there are feature films or experimental films. It’s the most prevalent form of filmmaking.

KD: So you served on the jury for short-form new media.

PZ: The cutting edge of documentary practice is in what we call new media interfaces. In fact, the works I looked at were from all over the world, not just the U.S. This is exploiting the affordances in new media technologies to think about creating a more modular documentary format that is bringing different voices into play but also very different structures. These are works that are not just about telling a story, but they’re about making arguments and providing explanations that are perhaps more analytical. The American-centric way of thinking about documentary is it’s got a character, and it has a story, but that’s not normative, actually, around the world. So what we see in new media forms is different affordances. We’re seeing modularity, little pieces of something, a lot of data visualization in these projects. We’re seeing short little pieces that are done in a more analog way, but they’re embedded in data visualization, or they’ll be complex websites that have enormous, dense, rich information that creates context. They will be not so much that causal narrative chain as much as different kinds of associative linkages that are mapped out in different kinds of ways. … It’s a very important area of documentary, and I think it’s probably the most innovative now.

KD: To be honest, I’m having a hard time almost imagining what you mean by a website interface being classified under “documentary.”

PZ: I want to point out something. The term “documentary,” the way scholars use it and people in the industry — I don’t like that term “industry” because if you’re talking to me, it’ll default to an American standard — what we’re talking about is this is very international. I would say it’s probably the most prevalent form right now, and I think it’s the most innovative. And it’s different wherever you are — there might be pieces that look analog, but then there’s data visualization, there might be a navigable website where you can do different search mechanisms, there’ll be short, five-minute pieces that you can navigate through in different kinds of ways — it is the most prevalent form, and I would say that it is the area of documentary, economically, that the big companies are really aggressively going into.

KD: It’s just usually when people think of the traditional definition of documentary —

PZ: Yeah, but the traditional definition is based on — even if you just use the word “traditional” when you say film — Number one: you gotta get the technology off the term “documentary.” That’s very old fashioned to think that way. Documentary is whatever interface it happens to be on. Most documentaries migrate across many different interfaces and get modularized. The one that we picked as the winner is called “Do Not Track” by the National Film Board of Canada. It’s not a film. It’s a multimedia project on an interactive interface. … “Do Not Track” is not about a character. It’s about a concept. … This is a very exciting area of documentary, in fact.

KD: So, after being on the jury, what do you see in the documentary landscape that you can communicate to your students?

PZ: What I see in the documentary landscape is that it is global. It is transnational, it is dynamic, it’s controversial, it is across many, many different platforms and many different kinds of economic structures from commercial to independent to citizen-produced work to iPhone work, and that the money that goes into something and the production values do not matter nearly as much as having the bravery to see the world anew.