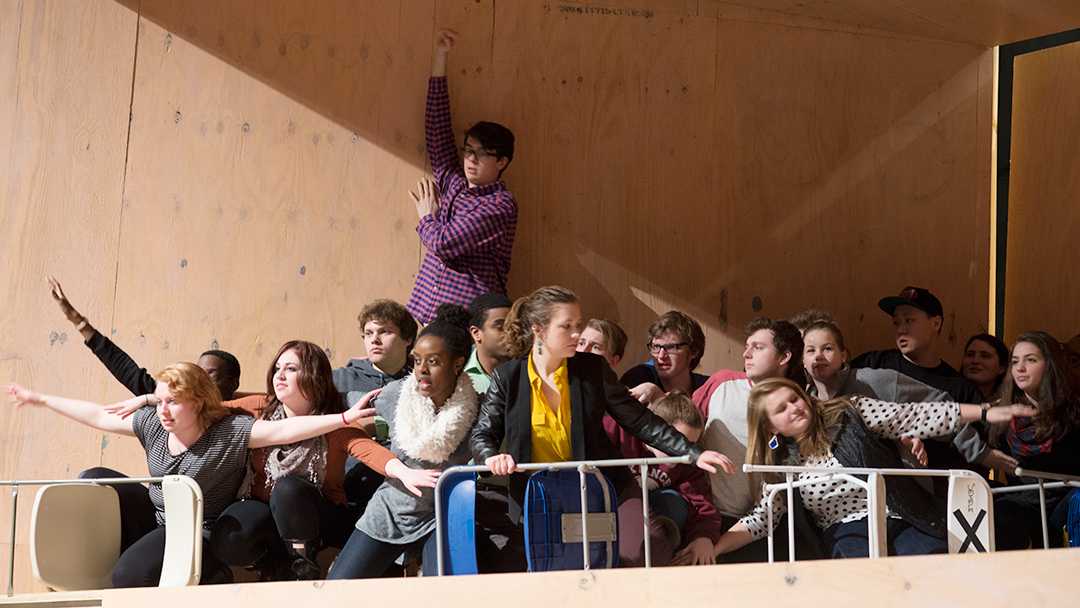 In an annual collaboration, the Ithaca College’s School of Music and the Main Stage Theater will be presenting “Semele,” a baroque opera that remains current through the incorporation of pop culture.

The plot of “Semele,” by G.F. Handel, comes from Ovid’s “Metamorphoses.” Semele is a mortal woman who aspires to immortality. Against a background of Roman gods and goddesses, Semele becomes Jupiter’s mistress, much to the ire of Jupiter’s wife, Juno, who plans Semele’s demise.

R.B. Schlather ’08 and his frequent collaborator Geoffrey McDonald join the faculty for the production of the opera. Schlather graduated from the college with a bachelor’s degree in art history, a minor in drama and special honors in theater arts, and said he is thrilled to be back at the college as the stage director for “Semele.”

Schlather and McDonald, the music director and conductor of “Semele,” have been gaining attention for their innovative work in opera. Most recently, they were named to WQXR Radio’s list of 10 Pivotal Moments in 2015 for Opera and Classical Music in New York City for their work on another Handel opera, “Orlando,” at the Whitebox Art Center, with opera greats including James Levine, Joyce DiDonato and Dmitri Hvorostovsky. “Orlando” was a nontraditional performance, produced as a process-art gallery installation in Chinatown, New York City.

Schlather and McDonald met five years ago and connected because of their mutual interest in creating work reflecting their own point of view. “Semele” is their third opera together. Schlather said he and McDonald share the same passion for making opera “modern, vital and entertaining.”

“He’s so smart about getting inside the score,” Schlather said.

The production of “Semele” at the college is nontraditional, including a stage stripped of most of the usual trappings. The set is simple yet symbolic, allowing the audience to focus on the performers and how they have combined and synthesized the text, musical material and points of view into an artistic whole. Schlather explained his reasoning behind this artistic decision.

“I get much more activated by performances that are stripped away of a lot of costume and sets just to focus in on the performers and their bodies and what they can do when they sync up text and music to produce a dramatic characterization,” Schlather said.

Schlather’s goal for “Semele” is to “bring the same energy we bring to … Handel downtown in New York City here to the students.”

The college’s production of “Semele” is a synthesis of modernity and realism against a backdrop of traditional music and mythology. The music is stylistically high baroque and requires high levels of technical skill from the orchestra and the cast. This production aims to be much more human and authentic than baroque operas were when they originally premiered.

“This staging and musical aesthetic will dispense with a lot of the traditional baroque pieties … in favor of something more immediate and bracing,” McDonald said.

Originally, Italian baroque operas focused on the “singer and song,” according to Sara Haefeli, assistant professor of music history. “Semele” is not a true Italian opera but maintains many of the musical stylistic features. In baroque opera, the story was not particularly important — audiences went to the opera to hear vocal fireworks from the current divas and divos. The college’s production, while maintaining an extremely high level of musical and technical skill, strives to find the meaning behind the text and the human motivations of each character.

Laura McCauley, a senior vocal performance major who is singing the title role of Semele, discussed the unconventional approach to the opera.

“It is a modern show, but it’s modern in the sense that we have worked so hard to find the realness of these characters. We have analyzed and justified everything we are doing up there with the music and text,” she said.

Something that has stood out to everyone involved is the high level of collaboration and mutual respect among Schlather, McDonald and the cast and orchestra.

“Director-conductor relationships in this business can feel very adversarial — like stage and music are working around rather than with one another — but I think R.B. and I are able to feed off one another’s perspective and energy,” McDonald said.

The cast and orchestra members also emphasized how receptive Schlather and McDonald were to their ideas, both musically and artistically.

“They find the intention and character in the text and from the music,” McCauley said. “Both R.B. and Geoff appreciate and ask for our input as performers. They challenge me to dig deeper and think more fully about every move I make and note I sing.”

The result is an exciting and meaningful performance that McCauley believes will take the audience “on a visual and auditory journey of ambition and passion.”