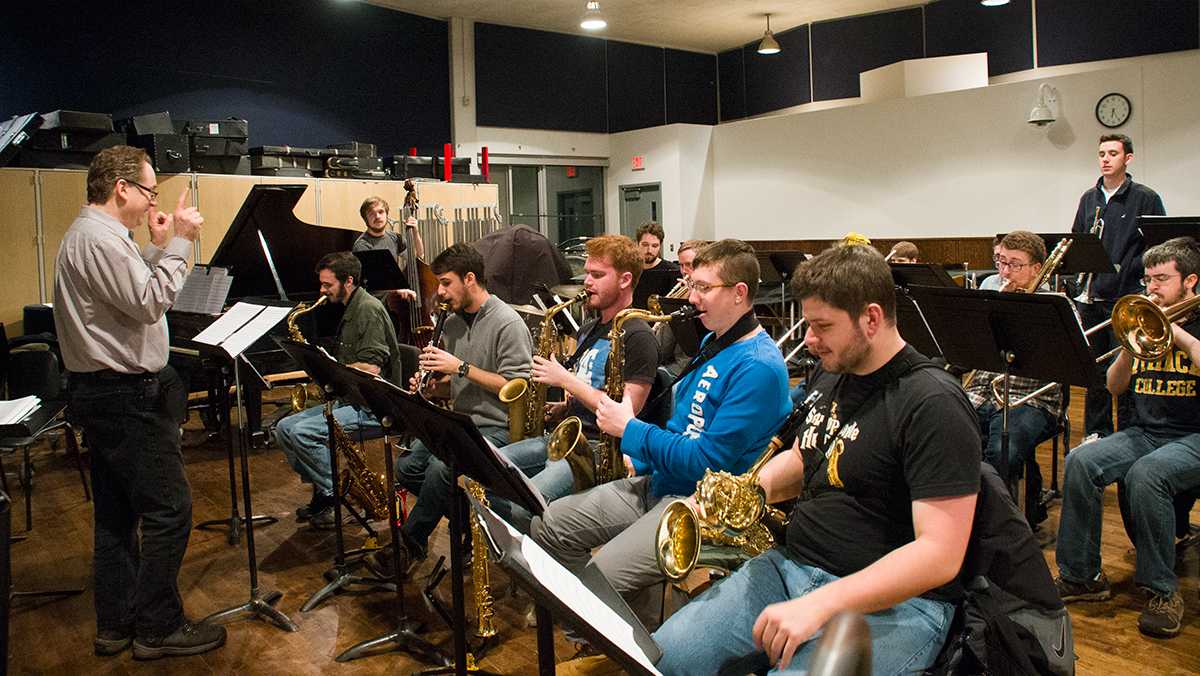 Sam Fuller/The Ithacan
Members of Ithaca College’s Jazz Ensemble rehearse for the Dave Riley Memorial Concert, which will take place Feb. 23 and will pay tribute to the life of Dave Riley, who taught at the School of Music for 20 years.
By Katherine Segovia — Staff Writer
Published: February 17, 2016

For one night, the Ithaca College School of Music will pay tribute to a man who contributed greatly to the school through his music and teaching: Dave Riley.

Riley was a professor at the college for 20 years, retiring in 1996. In addition to being a professor in the School of Music, Riley also started the Ithaca College Vocal Jazz Ensemble.

At 7 p.m. Feb. 23, exactly one year after Riley died, his career will be celebrated during a memorial concert in Ford Hall. The Dave Riley Memorial Concert will feature performances by the New York Voices, the Vocal Jazz Ensemble, the Choir and the Jazz Ensemble.

The New York Voices are a renowned vocal jazz quartet that was formed thanks to Riley. Its current members include Peter Eldridge ’82, Kim Nazarian ’83, Darmon Meader ’84 and Lauren Kinhan. The three alumni of the group — Nazarian, Eldridge and Meader — were members of the vocal jazz ensemble that Riley founded at the college. Throughout the years, the group has given numerous concert performances and produced seven studio albums.

In the summer of 1986, Riley invited a select group of alumni to accompany him to tour music festivals in Europe. Among the alumni who joined him were Nazarian, Eldridge and Meader. As a result of the time they spent on the tour, the New York Voices decided to continue performing together. Riley gave the quintet its name, and it never changed. After spending time with them on tour, Riley gave the group its first professional gig in 1988, inviting them to perform with him at The Town Hall, a historic venue in New York City.

“Dave gave us our name, our first big gig in Europe and our first professional gig in New York,” Nazarian said.

John White, associate professor of music theory, history and composition and director of the Vocal Jazz Ensemble, accompanied Riley and other Ithaca College alumni as a pianist for the European tour in 1986.

“I saw what became the New York Voices. It was amazing,” White said. “Dave made all of that happen.”

Not only did Riley help form the band, but its members also said he has also been a great source of inspiration to them throughout their career. Meader said Riley inspired the band to work in education through the vocal jazz summer camp they founded in 2008. In previous years, the camp has been held at Bowling Green State University in Ohio. However, for its eighth year, the camp will be held at Ithaca College.

Nazarian said one of the main reasons she wanted to hold this camp was to bring jazz back into the lives of students since many jazz programs have been cut from schools.

“Giving back to an industry that has been so good to us and keeping jazz alive is one of our main goals,” Nazarian said.

Besides being a mentor to the group as a whole, Riley also inspired each band member in a personal way.

Eldridge said Riley helped him get over his fear of singing. Since Eldridge was a piano player, he said, he was frightened to sing and had never done anything like vocal jazz before.

“He took the pressure off of it,” Eldridge said. “He made it very comfortable for me to jump into that world.”

White, who worked with Riley, said Riley also inspired him in his own life.

“It was really amazing working with him,” White said. “I really grew as a teacher and as a musician.”

During his time at the college, White said, Riley “composed many well-written arrangements for choirs,” some of which are still used today by the performing jazz ensembles and high school jazz choirs.

Michael Titlebaum, associate professor of music studies and director of the jazz ensemble, said Riley’s arrangements are located in the Ithaca College Library.

“The music he arranged is in our library, and I know various groups pull that music out from time to time. It’s part of his legacy,” Titlebaum said.

Titlebaum said the memorial concert is “being driven largely by the New York Voices,” as they played a big role in bringing the event to the college.

Nazarian said it felt right to have the concert at the college, where it all began for the New York Voices. She said she is most looking forward to honoring Riley through music.

“I’m looking forward to honoring this man in the most creative and artistic way possible,” she said. “It’s coming full circle. It’s remembering where we started and giving credit where it’s due.”

Meader said the memorial concert is not meant to be sad. It is meant to be a “happy occasion celebrating a wonderful musician’s life.”

White said honoring Riley through music is the best way to honor him. He said the music will speak to people more than words possibly can.

“Music touches people’s emotions, which is what makes it so special. Music performed at a funeral or a memorial service can often penetrate deeper into people’s being farther than words can go,” White said.