Ithaca College’s a cappella groups return to the stage 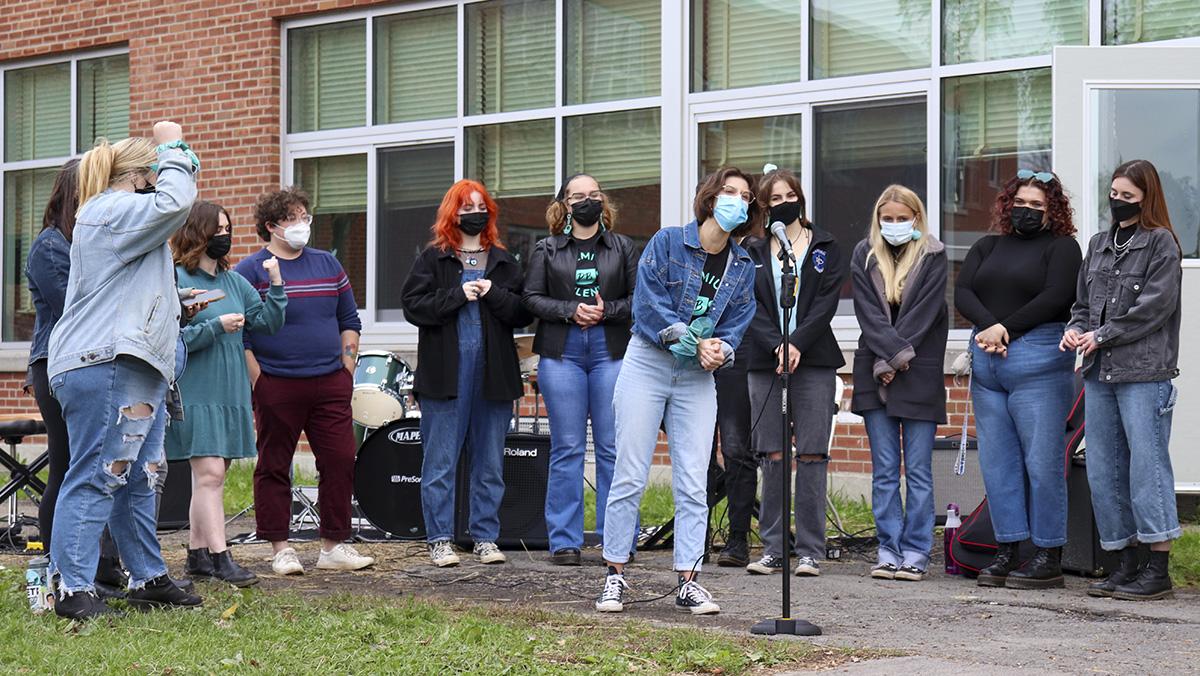 Upon stepping into a vast concert hall, lights dim with just a few illuminating a group of singers. With no instrumental music to accompany them, the audience only hears the voices of the group while they begin their musical performance. These performances mark the return of Ithaca College a cappella groups to in-person showcases. Instead of the tinny, staticy audio of Zoom concerts, the powerful vocals of the groups fill up concert halls full of people.

The newest addition to the school’s a cappella community is Tone Cold, a co-ed group, which started officially programming and auditioning in the Fall of 2020.

Junior Allison Lewis, music director and founder of Tone Cold, said the group focuses heavily on collaboration by bringing different people together, including those who aren’t singers. Some of the main events include hosting karaoke nights, game nights and open rehearsals where anyone can come listen to the group rehearse and sing along.

“We love to have as many people as possible involved in putting together our concerts, from arrangers and choreographers to graphic designers, photographers and social media gurus,” Lewis said.

Fall 2021 is the group’s first semester holding in-person events. Lewis said the group has grown used to video auditions, Zoom calls and online showcases but is excited to finally be able to perform on campus, with its next performance to be hosted at 7 p.m. Dec. 5 in Emerson Suites.

Senior Burke Hutchinson, president of Voicestream, said the group offers a place for voices of all kinds and for people of all genders. The group has been preparing for its upcoming performance after welcoming in-person rehearsals once again.

“Some of the other groups were able to maintain a lot of their attendance, and to continue to make music together [during the pandemic], but Voicestream did have a particularly tough time having members come to rehearsal,” Hutchinson said.

However, Hutchinson said returning to in-person rehearsals has helped the members develop a newfound appreciation for being together.

“We’ve all been really wanting to push forward and build this group back up together,” Hutchinson said.

Junior Samantha Frieri, president of Premium Blend, said she is excited to be back in person and get back to some normalcy while also trying new things — something that being virtual has taught the group.

“It’s really exciting to be getting out there again … informing people about us and the rest of the a cappella community,” Frieri said. “We all try to support each other as much as we can.”

Frieri said the number of people accepted into the group each year varies between 14 and 18 people, and similarly to most of the other a cappella groups, it is determined by auditions at the start of the academic semester.

Frieri said the group had a virtual showcase last semester, which was difficult to rehearse for. But she said the group was able to adapt to isolated rehearsals and online auditions by recording themselves separately and putting everybody’s voices together to make a vocal arrangement.

“It was definitely really challenging,” Frieri said. “Being virtual has allowed us to see new ways to get our music out there and to perform.”

Ithacappella is the oldest a cappella group on campus, founded in 1996. In the past, the group has helped to raise money for The Trevor Project, the Born This Way Foundation and the Ali Forney Center in New York City, respectively.

Junior Christian Castro, president of Ithacappella, said the group regularly tours, competes and performs for elementary schools. Castro said the shift to a virtual setting during the pandemic was hard on Ithacappella, as the group’s energy began to fade.

“We kind of call it the ‘Forgotten Year’ because we don’t believe it actually happened,” Castro said. “Nothing happened, pretty much … when we finally could meet in person it was more about building those connections again.”

Freshman Jaiden Collier, one of the six new members of Ithacappella this academic year, said he is excited to see where being in the group takes him.

“[Being in person] makes me happy,” Collier said. “The fact that we even get to be here at all and sing together is still something important to think about.”

Sophomore Lily Greco is one of the newest additions to Pitch Please, the college’s only non-audition based a cappella group. Greco said joining the group has been one of the best experiences she has had so far in college.

Greco also said Pitch Please is close with all of the a cappella groups on campus. Greco also participates in the e-board meetings for Pitch Please. Greco said the meetings help to keep communication flowing between the different groups, especially when discussing budgeting, song selections and upcoming concerts.

“We help each other out during each other’s concerts,” Greco said. “I’m definitely looking forward to our concert on December third … I just can’t wait for everyone to see all the work we’ve been doing since the beginning of the year.”