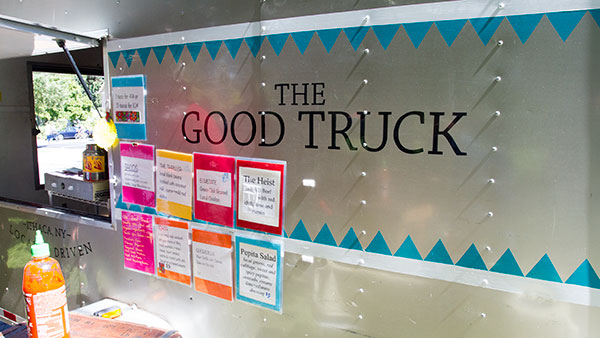 Corey Hess/The Ithacan
The Good Truck sells tacos during Porchfest on Sept. 14. The Good Truck and trucks like it have faced new zoning laws limiting where they can sell food.
By Mary Ford — Contributing Writer
Published: September 17, 2014

A makeshift sign stands on the corner of Meadow and Seneca Street. A message, spray-painted black on a gray background, reads,“Circus Truck has moved to 720 W. Green.” It’s almost impossible to read in the headlights of passing cars. Though it seems to suggest the normal movements of a traveling bigtop, what the sign truly indicates is a policy change that has caused a stir among mobile entertainers of a different kind: food trucks.

Food trucks have been vending in Ithaca for the past several decades, and their numbers have been on the rise in the past few years. However, until Jan. 27, no street vending policy existed in Ithaca; consequently, food trucks were not technically allowed to park on any city property, including the street itself. Many of them conducted business by parking on private property, in public parks or only at special events or food truck roundups.

Now, the City of Ithaca’s official street vendor policy has been in place for almost a year, giving vendors the opportunity to apply for a license and a rented parking spot. Prices for designated parking spaces all over Ithaca range from about $150 to almost $500 per quarter, depending on the location and the time of day, on top of a $100 annual licensing fee. In order to fairly determine which vendor parks in which spot, a lottery is held for each quarter. Kathy Gehring, executive assistant to the superintendent at the Board of Public Works, said the process of creating the policy began long before the regulations were put in place.

“We had many, many inquiries from existing and potential mobile food vendors over the past five to seven years,” Gehring said. “By early May 2013, the Board of Public Works decided to create a policy to allow street vendors to start selling on city streets.”

The board created a subcommittee to research the subject and start drafting proposals for a policy. In early December, it released its final draft to the public via social media outlets and on the township website. At that point in the process, the policy stipulated that food trucks would need to be parked 100 feet away from brick-and-mortar restaurants and have self-contained electrical systems.

The town invited citizens to discuss the draft of the policy at two public meetings in late December 2013 and early January. At these meetings, a new issue arose: Restaurant owners were concerned that street vendors would offer more competition to their businesses once the policy was in place. The Ithaca Times reported that some of the restauranteurs thought a 100-foot minimum parking distance from restaurants was too short. Citing these concerns, the policy was changed to a 200-foot minimum by the end of the second public meeting, and now the updated restriction is part of the official policy.

Though the policy is about to enter its third quarter, vendors have so far chosen not to participate. At the first two licensing lotteries this year, not a single street vendor applied for a license or attended the lottery proceedings.

“We built it, and they didn’t come,” Gehring said of the policy. “I wouldn’t call that outright opposition, though.”

Food trucks continue to operate off the streets, giving priority to their existing business over the new policy.

Mandy Beem-Miller is the owner of The Good Truck, a taco truck selling locally grown food since 2010. She operates her truck out of the parking lot of the Argos Inn on East State Street and the parking lot of her sister’s cafe, The Shop, in addition to attending food truck roundups and special events like the Ithaca Festival and Porchfest. She would rather stick to her existing business plan than juggle both the new policy and the everyday operation of her business.

“We are on private property right now because it simplifies the process,” Beem-Miller said. “It’s just too much of a can of worms to go through the city right now.”

Vendors are able to legally continue their businesses outside of city property by purchasing and parking on private land or making arrangements with private landowners. They can also apply for a temporary vending license that is used for vending at festivals and special events. However, if vendors chooses to sell on city property without a license, they will be immediately asked to relocate and could be subject to fines. Now that there is a policy in place, however, it is possible for vendors to avoid these complications if they are willing to work with the system.

Paulie’s Global Kitchen is a new vending and catering business founded this past summer by owner and chef Paul Grunkorn. At Porchfest this year, he was careful to adhere to the regulations of the street vending policy.

“This is actually my first gig on the actual street, so I’m still learning,” Grunkorn said. “I’m fully licensed and everything, but if I was touching the sidewalk there could be problems.”

Grunkorn started his business in hopes of adding to Ithaca’s mobile vending community but said he was disappointed by the lack of street-vending turnout at Porchfest — Paulie’s Global Kitchen and The Good Truck were the only vendors in attendance.

“I’ve been enjoying watching my business grow this summer, how everything has been snowballing,” he said. “Today clearly shows that there is a great need for street vendors in Ithaca.”

J.P. Vico, the owner of the Circus Truck, has relocated his truck since the implementation of the policy and declined to comment any further on how the policy changes have affected his business.

Some vendors were noted as special cases in the policy: Louie’s Lunch and the Hot Truck, both located in Collegetown, have become staples of the community by serving late-night food to Cornell University students for decades. The Board of Public Works grandfathered these trucks into the system for one year, allowing them to remain in their traditional parking spaces. However, in order to make the policy more uniform, the board requested that the grandfathered trucks conform to the rest of the regulations by making their trucks self-contained and easily mobile.

So far, neither truck has participated in a licensing lottery, though their parking spaces are owned by the city and are designated as options for licensed vendors on the policy’s map. Because no other vendors have claimed the spaces, however, both food trucks continue with their business as usual.

This year’s third licensing lottery was held on Sept. 10 and was the first to have any vendor participation, Gehring said.  Collegetown Crepes was the first and only food truck to apply for a license under the new system and will have its grand opening on the corner of Dryden and Eddy Streets starting Oct. 1.

Gehring said she expects the process of adapting the policy to the community’s needs will continue for some time yet.

“We decided to have a year-long trial period, but that might stretch to two,” Gehring said. “There could be some changes to the policy during this time. It is not legislation. It is not in the city code or charter. It’s a policy, and we’re working on making it better for the community.”