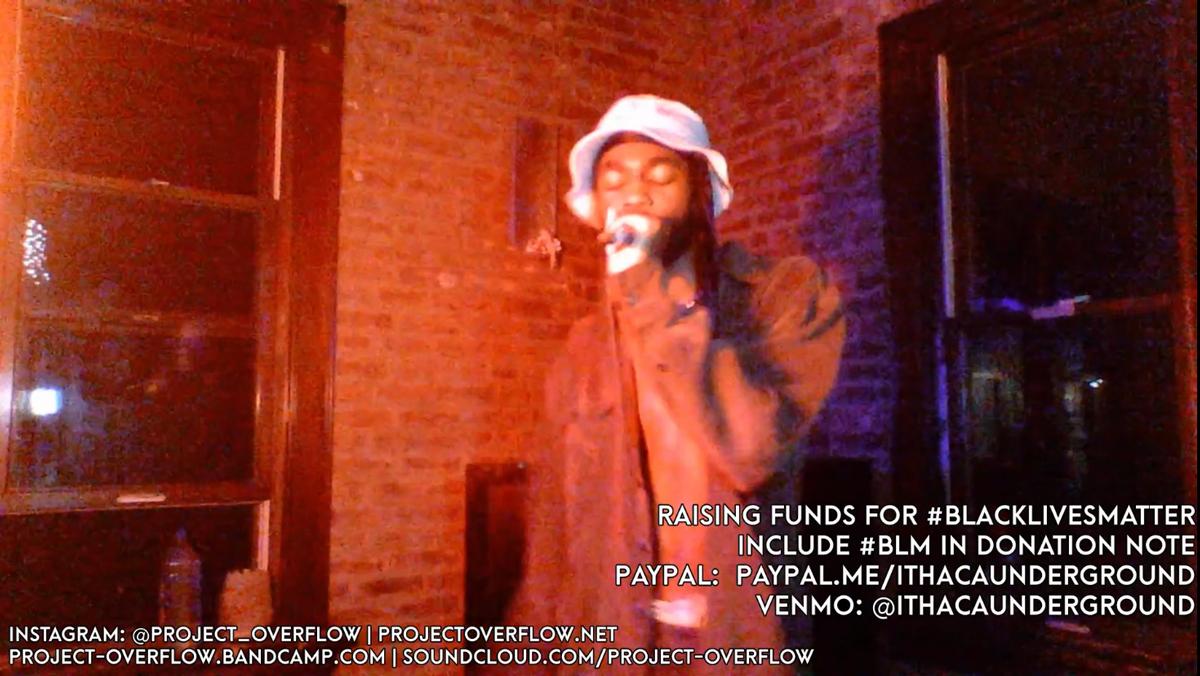 Between the coronavirus pandemic and the fight for racial equality, times seem endlessly turbulent. But art is a powerful tool to help people reflect on their emotions and take action. The Ithaca College Bureau of Concerts (BOC) and Ithaca Underground, a local nonprofit that highlights artists from underrepresented groups, did just that.

The two organizations joined together with local artists to stream a virtual benefit concert for Black Lives Matter Ithaca on July 10. The concert, which was broadcast on Twitch, featured Overflow, Misses Sick07, Sam Kwan and Jonah Hirst and Sundried.

“If we have any sort of privilege in this world, where we’re able to raise money for anything, I personally think that it’s important to raise money for communities of color, always and especially right now,” said Melanie Marsh ’20, booking manager for Ithaca Underground.

Because of the pandemic, BOC and Ithaca Underground canceled all their concerts planned for the spring season. Rising senior Whitney Rosenfeld, marketing director of BOC, said that rising junior Lindsey Pressman, assistant marketing d of BOC, reached out to Marsh in March and proposed the idea of having Ithaca Underground collaborate with BOC for a virtual concert.

Rosenfeld said that BOC initially explored the idea of having the concert benefit an organization focused on the pandemic, but its focus shifted to the Black Lives Matter protests following George Floyd’s death. At the end of the night, the concert raised $500 in two hours.

“We ultimately raised a lot of money in a short amount of time,” Rosenfeld said. “It was great to see that pan out and come to fruition in terms of amplifying Black voices, as well as making a significant contribution to Black Lives Matter Ithaca.”

Gibson works for the information technology company Integrated Computer Solutions (ICS). Gibson distributed leftover laptops with webcams from ICS to musicians who needed them. Ithaca Underground also purchased USB mixtures and microphones with grant money and gave them to musicians.

“I didn’t know how well it was going to work because I’ve never done something like this before,” Gibson said. “There’s a lot of potential for things to go wrong when relying on a bunch of different computers. Any one of those computers can have a glitch.”

The musicians also had their own challenges when it came to adapting to the online format. Sam Unger ’20 is the single musician behind the psychedelic band Sundried. Unger said he usually performs with a group of four or five musicians whom he teaches his songs to before concerts. For the virtual concert, however, Unger was on his own, accompanied only by his guitar and a drum machine.

“It was more intimidating to do it by myself,” Unger said. “I’ve found a shield with the drum machine. … It feels good to have more than one sound source happening. I would definitely feel very intimidated if it was the guitar and my singing.”

Gibson said they ran the main stream from their home computer, where viewers could listen to Gibson’s announcements and see a stream schedule. When it was time for a new musician to come on, Gibson would switch the stream to that musician’s computer and rebroadcast it. There were a total of 58 separate devices streaming the concert, though Gibson said there were likely even more people watching.

Gibson said Ithaca Underground usually puts on small shows in bars, so this was a big show for the organization.

“It was really cool to see that people were so interested,” Gibson said. “And for Black Lives Matter, it was a huge success overall.”

The concert was headlined by Black hip-hop artist Overflow, real name Nicholas Robinson, and rap artist Misses Sick07, real name Ana Reed, who were supposed to be featured in Ithaca’s Underground’s hip-hop concert in April before the event was canceled.

Robinson said they were happy BOC and Ithaca Underground put on a show benefiting Black Lives Matter because it has been difficult for them to stand by with the protests and pandemic going on. In June, Robinson held their own fundraiser where they donated all the proceeds from their merchandise sales to Metro Atlanta and Minnesota bail funds, Southside Community Center in Ithaca and the Navajo Nation.

“It’s kind of hard to wake up in the morning and look at the news,” Robinson said. “That actually had me depressed for quite a bit, and then I decided I’m not going to be sad anymore. I’m just going to do something about it.”

Robinson said they received compliments on Instagram throughout the concert.

“They were saying things like, ‘Yo, you’re killing it. This is amazing,’” Robinson said. “I was like, ‘Wow, I didn’t know I could really kill a virtual concert.’”