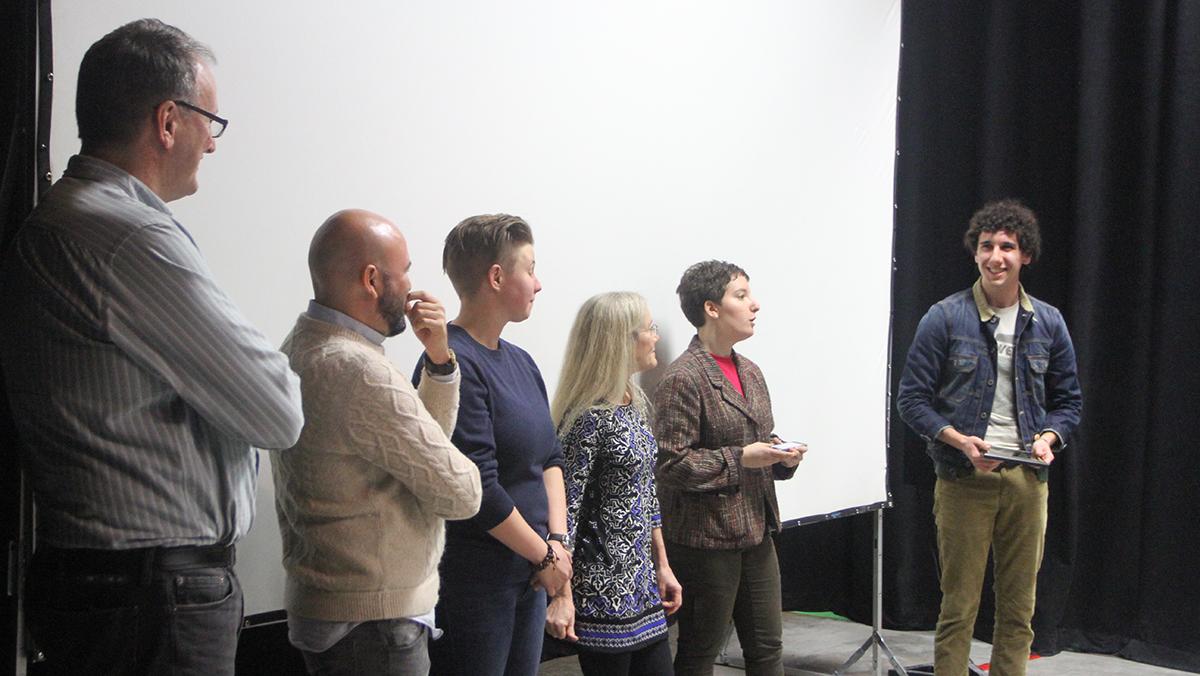 Inside The Studio on East State Street, low scenic lighting and movie posters coat the walls in the location that once belonged to Cinemapolis. As his eyes shined, sophomore Spencer Muhlstock, a cinema and photography major, laughed nervously in excitement for what was to come that evening. It would be the first Ithaca Student Film Festival, a student-run festival series of movie screenings guided by Carol Jennings, director of the Park Media Lab.

Muhlstock, who works as the production director for The Studio, said he came up with the idea of creating an Ithaca-based student film festival after he experienced a lack of opportunities available for media students to showcase their work outside the Roy H. Park School of Communications.

The festival’s lineup consisted of 12 films of varying lengths, styles, themes and genres. The festival, held Feb. 3, featured 14 awards, ranging from Best Fiction Film to Excellence in Acting and Excellence in Music.

The judging panel for the event consisted of Ithaca College alumni who are recognized industry professionals: Rodrigo Bellott ’01, film producer and casting director; Andi Obarski ’13, independent cinematographer known for her work on the 2014 documentary “A Life Imagined”; and nongraduate alumnus of ’86 Michael McNeil, head of business affairs of Weta Digital, a visual effects company that has worked on films such as “The Hobbit” trilogy and “Avatar.”

Anna Gardner, special events–manager at The Studio, said the executive team at The Studio went through 48 film submissions. After films were filtered based on a rubric looking at cinematography and story, Gardner said, the team sent off 12 of those nominated films to the alumni judges, who picked the winning films.

“I think one of the more unique things about this is … whichever one of us [from The Studio] knows these students personally, we have to try to be as unbiased as possible when we’re judging,” Gardner said.

The festival emphasized individuality within work. Muhlstock said prior film festivals in Park have obtained minimal submissions because they’re all categorized festivals — they have specific themes and guidelines each entry has to follow.

“There would be a theme, and people would have to make a film based on that theme,” Muhlstock said. “People want to be able to just submit anything that they’ve been working on for the semester.”

He said the benefits of hosting a festival include the opportunity for students to build their resumes by adding awards they’ve won at the festival, as well as the chance to screen their work in front of audiences and alumni.

“Ultimately, it’s a way to bring the whole film community together,” Muhlstock said. “And that’s the most important thing.”

Bellott said some of the films in the festival could win in a professional film festival because they convey intelligent messages.

“I was tremendously impressed,” Bellott said. “It didn’t seem like typical student films. … I saw people taking risks with genre, and it felt professional.”

Obarski said she enjoyed seeing films that were true to their style but didn’t enjoy the lack of female participants in the festival categories. There were only three female films selected.

“I expected more diversity from the campus,” Obarski said.

Sophomore Emma Beedenbender won Best Animated Film for her one–minute film “What the Water Gave Me,” while junior Gabriella LoBue won Best Documentary for “Abeoji: A Father’s Story,” a documentary about a South Korean orphanage director and his role in the lives of the children he cares for.

Former student at the college Jharrel Jerome, known for his success in the Golden Globe–winning film “Moonlight,” took an award for best actor for his performance in the short film “Somewhere,” directed by sophomore Max Friedman.

Sophomore April Carroll said her favorite film of the night was “What Comes from a Swamp,” a short directed by junior Tyler Macri. Winning the category of Best Fiction Film, the short tells the story of a young man who struggles to care for the being he has hidden in a crawl space since childhood.

Carroll said she hopes the festival will become a more prominent part of the campus culture.

“I was really happy that I could come,” Carroll said. “I really hope it can catch on. Park is such a big school, and if a lot more people submit, it can be a bigger festival.”

As Muhlstock said he anticipated, the festival gave the students an opportunity to be acknowledged not only by their peers but also by industry professionals who could further their careers.

Bellott said the films felt like individual voices, similarly to “Moonlight,” because all the films tackled political issues.


“You know, the voice is so unique, and the themes are so universal it kicks that barrier [of being a niche film] and just goes,” Bellott said. “And I saw that in the students’ films. It felt like there was a voice behind them.”

Cats to leap to big screen with video festival