Ithaca’s drag scene on the screen 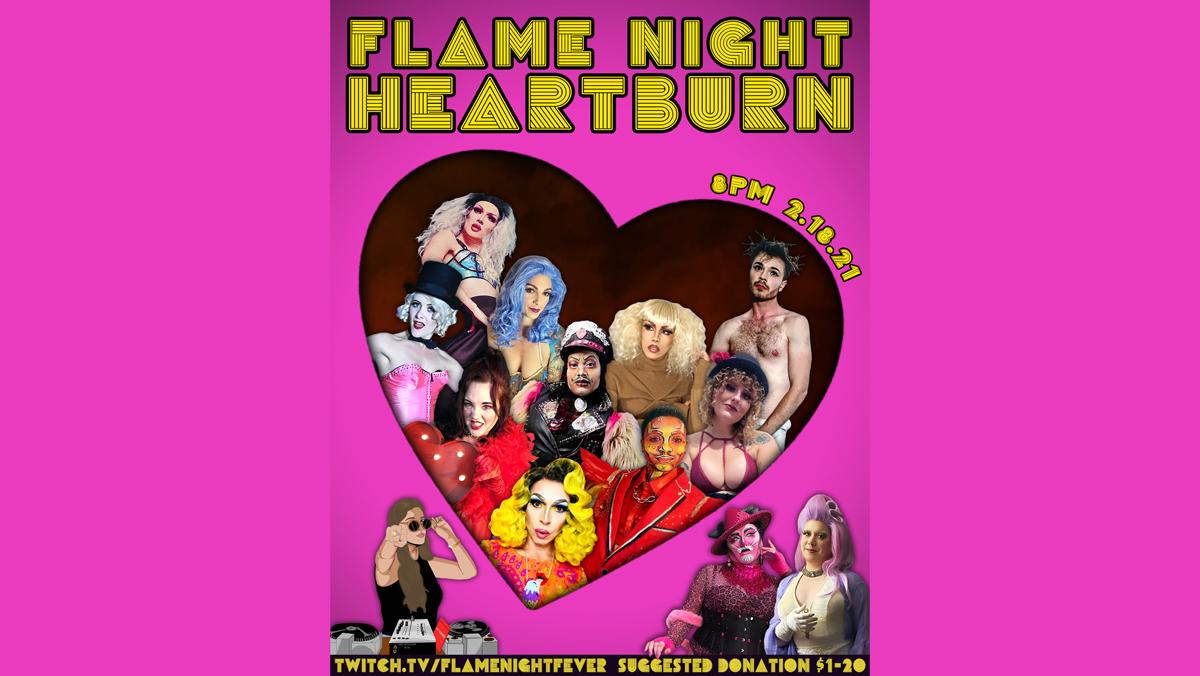 Courtesy Flame Night Fever
Walk to the couch, open up a laptop and pull up Flame Night Fever, a virtual drag and burlesque show, on Twitch.
By Emily Lussier — Staff Writer
Published: February 18, 2021

For many Ithaca drag fans, the third Thursday of every month is special. After a long day of work, they rally together, dressing up in their shiniest clothes and putting on their flashiest makeup, excited for what will no doubt be a thrilling night. Once everyone is all glammed up, they walk to the couch, open up a laptop and pull up Flame Night Fever, a virtual drag and burlesque show, on Twitch.

From performers in colorful little dresses dancing to hits from “Mamma Mia,” to others geared up in leather, posing on motorcycles while lip syncing to Britney Spears, Flame Night Fever has a little bit of everything for everyone.

“We usually make a nice cocktail, put on a spicy lip color, and I’ll always dress up for it,” Shelby Buche ’18 said. “Even if there’s only a few people there, it’s always a special, exciting time, and for me it really did replace going in person to those types of events and seeing those exact people.”

Flame Night Fever was created during the pandemic, in May 2020, by co-hosts and producers Tilia Cordata and Kitschy Scofflaw ’17. It streams on the third Thursday of every month on Twitch, a video livestreaming platform. The suggested donation is $1–20 through Venmo or PayPal, and tipping individual performers is encouraged.

Flame Night Fever is a variety show rooted in drag and burlesque but also featuring an eclectic mix of performance art, including circus acts and puppeteers. Depending on the individual performer and their style, drag and burlesque often features provocative, sometimes comedic performances with dancing, singing or lip–syncing, lavish costumes and makeup.

Scofflaw said Flame Night Fever hosts performers with a range of experiences. They said some performances are basic, one-take shots while others are highly edited. Cordata and Scofflaw host the show live, engaging with the audience through the comment section and introducing each pre-recorded act.

“Because people can create the video art in advance, they can do things that you could never do live that are just incredibly unique and amazing,” attendee Prince Cunningham said.

Cordata said that at the start of the pandemic, she and Scofflaw were working together on “Drag Me to School” — a program at Cornell University’s LGBT Resource Center that Cordata started three years ago — when they decided to create a virtual drag show as well.

“It was kind of pitched as a one-time thing, and then as we were planning it, we were seeing the amount of interest, and we were like, ‘Oh maybe we’ll do a couple more,’” Cordata said. “Then as the pandemic stretched out, we realized it just was a recurring thing because this wasn’t going away.”

Lea Davis, technical director of Flame Night Fever, said the first few Flame Night Fever shows were held on Zoom before moving to Twitch. She said she began using Open Broadcaster Software (OBS), a cross-platform streaming and recording program, to livestream on Twitch. Davis, a theater lighting designer, said that when the pandemic hit, she had to learn new skills in order to keep working, like how to use OBS and livestream.

“When [COVID-19] hit, when your whole career is based on events and gatherings, everything stopped for me,” Davis said.

Scofflaw said that even though they miss in-person drag shows, virtual shows are more accessible and can have a wider reach. Davis said Flame Night Fever gets 150 to 200 unique visitors every show from all over the world.

Scofflaw said virtual shows are very different from in-person shows, especially because the audience interaction and energy is so different.

“Every once in a while I have that moment during the show where I’m just like, ‘I’m just screaming at my computer for two hours. This is weird,’” Cordata said.

Cordata said the comment section helps her feel reconnected to the LGBTQ community amid the pandemic.

“I got into drag and have persisted through drag mostly for community involvement, like building spaces for the community and being visible,” she said.

In addition to creating a safe space for individuals in the LGBTQ community, Cordata said Flame Night Fever does some activism work. They assemble resources for anti-racism and also donate a portion of their profits to local or national organizations every month.

Davis said that while hosting, Cordata and Scofflaw try to promote an interactive comment section through trivia, games and jokes.

“We’ve just gotten comfortable on the air in a way that almost feels like a bar and like a communal space online, but it’s taken a really long time to adjust to that,” Davis said.

“We’ve learned how to finagle around it,” Scofflaw said. “We don’t put burlesque in the tags … on Twitch because that kind of flags it for them, and we try to put anything more risqué toward the end because it does take a minute for them to take the stream down.”

Despite these restrictions, Flame Night Fever performers have complete freedom in their performances, though they are asked to keep guidelines in mind, Cordata said.

“It’s very much their own creativity and their art that we’re just showcasing,” she said.

The next show, Flame Night Heartburn, will be at 8 p.m. Feb. 18. Scofflaw said the theme for this show is Valentine’s Day-inspired.

Like usual, there is a line-up of 10 performers for the show, Scofflaw said. Each show has a different lineup, though there are some frequent performers, they said. Scofflaw said Flame Night Fever is always accepting submissions at flamenightfever@gmail.com.

One performer returning to Flame Night Fever is Veruka Dagger ’18, an Ithaca College alum based in Los Angeles. Dagger said that through her ties to Scofflaw and Cordata, she got involved with Flame Night Fever during its first show in May and has performed a few times since. She said that though there are some drawbacks to virtual drag shows, like the disconnect between performers and the audience, she appreciates the level of control performers have over their work. They have the power to record and to delete, making it easier to brand themselves, Dagger said.

“I think something that’s great about digital drag shows and Flame Night Fever is that what you put out there is 100% authentically you,” she said.

Seasoned performers like Dagger will also be sharing the virtual stage in Flame Night Heartburn with newbies like Brooklyn Bridges, a former Ithaca College student and recent Cornell transfer.

Bridges said she started doing drag before coming to Ithaca College. She said she got into the local drag scene and was inspired by other performers, including Dagger.

Bridges said she has been refining her makeup and dance skills during the pandemic. However, she said she knows a lot of college queens who were not able to practice their crafts during quarantine like she was.

“I know for other queens, it’s been really difficult because either they are very focused on getting a paycheck because clubs are shut down and performance venues are shut down [or they] … didn’t have access to their stuff or were in spaces that weren’t safe for them to make their art,” Bridges said.

For her first Flame Night Fever performance, Bridges will be performing to “Cyber Sex” by Doja Cat.

“My name was out there, and they know I’m a busted baby queen, but luckily they’re placing their trust in me to perform, and I will not disappoint,” Bridges said.

Davis said Flame Night Fever is important because it is a gathering place — though not a physical one — for the LGBTQ community. She said she feels appreciative of the community the show has cultivated.

“I think there is a wide audience for drag,” Davis said. “I think I kind of forget this living in Ithaca, but there are a lot of queer people out there who are really seeking queer art and creativity. … When I feel my best about this, I remember that we are really helping people see one another.”