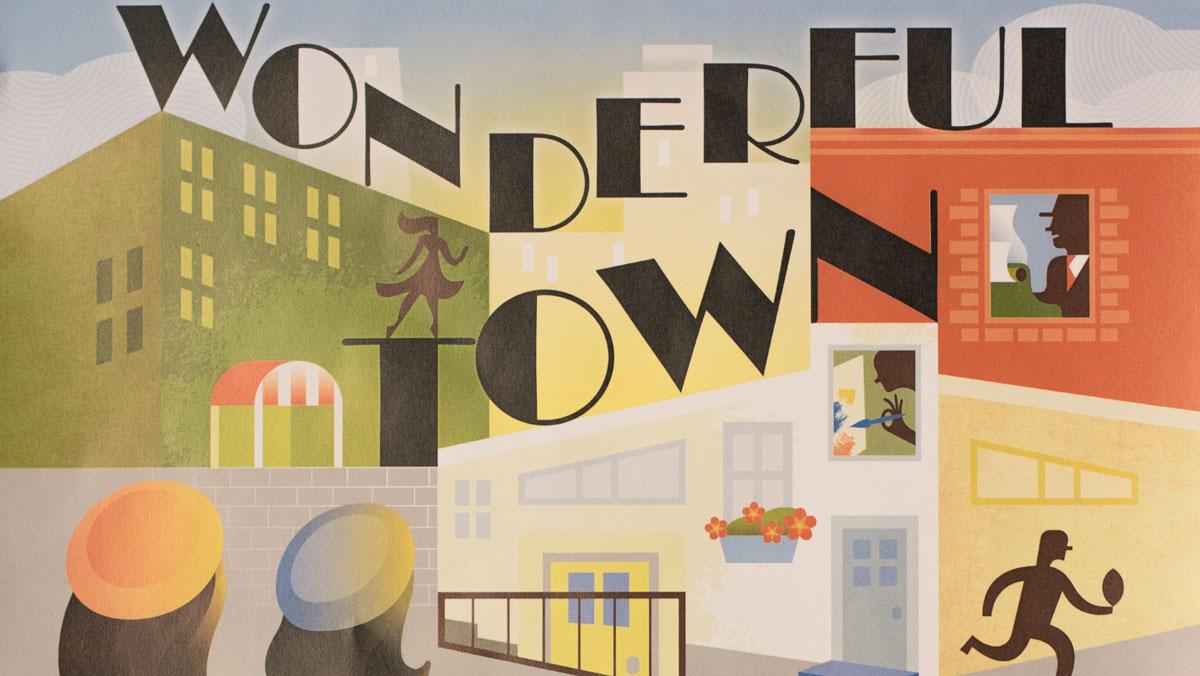 In the opening scene of Ithaca College’s Main Stage Theater fall musical “Wonderful Town,” a group of tourists enters onstage and gazes at the bright city buildings moving around them, bringing the audience with them into the flashy world of New York City in 1935.

Directed by Courtney Young, assistant professor in the Department of Theatre Arts, “Wonderful Town” is about two sisters from Ohio who move to New York City.

Featuring music by Leonard Bernstein, the musical follows the two artistic sisters — writer Ruth (junior Kylie Heyman) and actress Eileen (senior Veronica Ortiz) — as they move to a small apartment on Christopher Street to work toward career success while navigating their romantic lives.

Christopher Street, located in Greenwich Village, is an iconic home of artists, writers and activists. Notable residents include E. E. Cummings in 1918 and Yoko Ono in the 1960s. The street was also home to the Stonewall riots in 1969, a series of violent confrontations between the police and members of the gay community following a police raid of a gay bar that served as a catalyst for the LGBTQ rights movement.

“We’re really working on fleshing out the world in which they arrive,” Young said.

A strategy for doing this begins with the ensemble. Each ensemble member was given a specific artist or other notable figure who would have lived on Christopher Street or in Greenwich Village at the time, upon whom they could base a character. Ensemble members research their artist to embody their personality. Costume designs are also based on photographs of the artists.

“Now, this character doesn’t have anything to say, necessarily, with no speaking lines in the show, but each ensemble member wasn’t just a general artist,” Young said. “We took these people from history and put them onstage.”

“Wonderful Town” was written in 1953 during Broadway’s Golden Age. Due to its time period, the creative team found it challenging to modernize certain elements for today’s more progressive audience.

“The show is not in itself an extremely deep piece of literature,” Ortiz said. “It’s a feel–good musical comedy. For me, I think grasping that and understanding that words given to me are coming from a man in the 1950s is just something that you grapple with.”

One scene that actors found difficult to perform was the musical number “A Quiet Girl” in which the primary love interest describes who he thinks is his ideal woman. During the song, the character wishes that the woman he’s fallen in love with was gentle and soft, rather than intellectual.

“He’s describing a woman who, for contemporary audiences, might feel passive and less than strong,” Young said. “Now he ends up with this very outspoken, strong protagonist, but just the title, ‘A Quiet Girl,’ really rubbed students working on this show the wrong way. It’s working with the actors singing the show about intention and subtleties that go into that particular moment in the show.”

Working within the parameters of the original script, the actresses focused on portraying the women’s dedication to their career goals.

“It’s a very feminist show for the time that it was written,” Ortiz said. “It’s centered around two women trying to make it on their own in New York City, and they have their own successes that have nothing to do with men.”

This exploration of New York City was a main influence on the design of the set. Senior Daniel Allen, set designer, cited this portrayal of the city when discussing the design process.

“Because these girls are traveling, the design team as a whole attached to the idea of … those old 1930s postcards,” Allen said. “If you look at the old 1930s postcards it’s all big and bright, so everything is illustrated — very bright, very colorful, very flashy.”

To invoke the idea of a romanticized, living city, much of the scene changes and set movements are run by mechanics.

“There’s four city buildings on the stage and they are all one hundred percent operated by motors offstage,” Allen said. “The actors are not pushing them on, they’re riding on with the scenery … as they’re walking through the street, all the scenery and buildings are moving around them.”

The creative team for “Wonderful Town” is advertising the show as a cheerful, family-friendly musical that can appeal to those of all ages.

“I think this is one of those musicals and one of those pieces of art in general that anyone can go in and escape from their own lives, and just have a good time,” Ortiz said. “It’s not going to remind you that you have work the next day, or that you’re in a fight with your significant other. It’s one of those shows you’re going to go into, and for two hours you’re going to be in this loony-toon crazy-land, and it will take all your worries away for a little bit.”

“Wonderful Town” runs Oct. 31 through Nov. 11. Tickets can be purchased at ithaca.ticketforce.com.