Local play provides insight into life as an immigrant 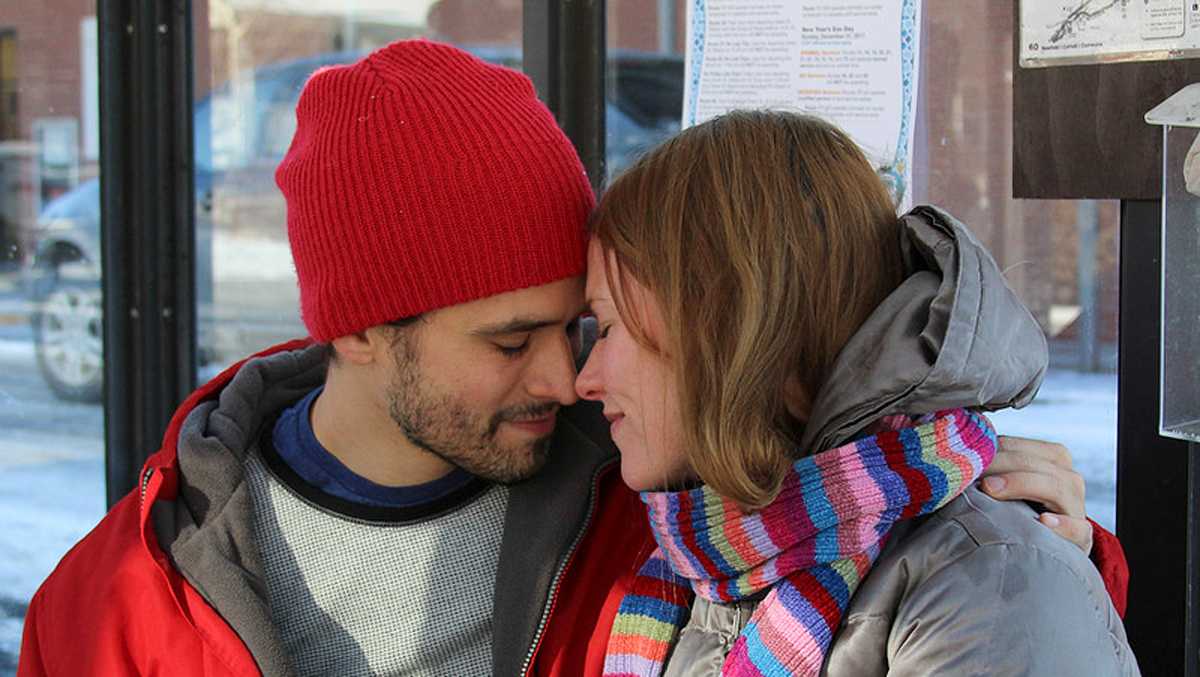 Lights stream through the plexiglass ceiling of a run-down bus stop, illuminating its steel bench and chipped paint. Upstage, just behind it, a chain-link fence and portion of a cinderblock wall hang from the ceiling, surrounded by darkness. This naturalistic set depicts the gritty world featured in the Kitchen Theatre Company’s upcoming play “Ironbound.”

The cast and creative team of the play involve three Ithaca College alumni, two professors and a current student, many of whom have previous experience working with the Kitchen Theatre Company.

“Ironbound,” written by Polish playwright Martyna Majok, portrays the life of Polish immigrant Darja, played by Kate MacCluggage. The play follows Darja’s life as she struggles to find love and care for her son while living in the poor Ironbound neighborhood in New Jersey. Three scenes, each set in at the same bus stop, focus on her interactions with three different men. The story ranges from 1992 to 2014.

Sophomore Adrian Abel Amador is the only student involved in the cast. Amador said that M. Bevin O’Gara, the Kitchen Theatre Company’s artistic producing director, had attended the Dillingham Main Stage season auditions and contacted Amador and other actors who she thought were suited for the role of Vic. Amador said Vic comes from a wealthy private school, but frequents the Ironbound district and is interested in hip–hop culture to distance himself from his troubled family.

“He’s such a complex character, and he makes you play this performance,” Amador said. “He puts on this tough guy attitude. … Basically cracking through it, showing the the little bits, was a tough part for me.”

Vic is one of the three men with whom Darja interacts in the show. The two start off as strangers before beginning a conversation at the bus stop. Austin Jones, assistant professor in the Department of Theatre Arts, plays Tommy, Darja’s lover. Marcin Mesa ’10 plays Maks, Darja’s first husband who travels with her to the United States. When Mesa was in the play “Emmett & Ella’s Big Apple Escapade” at the Kitchen Theatre in 2008, associate producing director Lesley Greene learned he was Polish. Mesa said that because Maks speaks Polish, Greene reached out to Mesa and asked if he would be interested in reading the script.

In the show, Maks comes to the United States to pursue his dream of becoming a famous blues musician. Mesa said that because his parents are immigrants, he appreciated telling the story of an immigrant experience.

“It’s about how you have to persevere, and it isn’t as easy as maybe we would all believe the American dream is,” he said.

Because “Ironbound” is set in a poor urban environment, David Arsenault ’10, the scenic and lighting designer, said he wanted to emphasize the industrial landscape to make the situations in the story realistic. He said the script does not provide specifics for a stage design, so the final product was decided through long discussions between him and O’Gara.

“I think our biggest challenge was making up our minds because there were so many different options,” Arsenault said.

Arsenault said the set includes a floating fence and brick wall, as well as realistic elements so the set can be abstract enough to allow for the passage of time in the play. Megan Parker ’18 is the props designer, and Ruth Barber, scenic art and design instructor in the Department of Theatre Arts, worked as the scenic painter for the show. Barber said the small space made a sense of realism difficult to achieve.

“Especially in an intimate theater such as the Kitchen Theatre, you don’t have the distance on your side to sort of exaggerate and have the audience get a feel or sense of what it is you’re trying to create,” she said. “You’re really reliant on all of those textures.”

Arsenault said that working with O’Gara, who joined the Kitchen Theatre Company in March 2017, helped him to explore new ideas.

“I was able to work with someone new and re-evaluate how I understand the space based on how she’s perceiving it because she’s newer to the space than a lot of people I’ve worked with,” he said.

Amador said working with experienced professionals helped him learn how to explore a complex character without feeling pressured to have a finished product at the first rehearsal. Norman Johnson, assistant professor in the Department of Theatre Arts, had discussed in class the important of real-world experience before Amador joined the show, he said.

“One of my teachers, Norm Johnson, said the best experience is to ‘do it’,” Amador said. “Being given the opportunity to work in a professional setting with all these amazing and talented people is the best part.”

Ronica V. Reddick ’03 returns to Ithaca this month to play Barbara in “boom” at the Kitchen Theatre Company. A native of Syracuse and graduate of Ithaca College’s acting program, she performed in shows at the college including “November Girls,” “The Colored Museum” and “Goodnight Desdemona (Good Morning Juliet).” Since graduation, her credits include several…

Contributing writer Faith Meckley sat down with Colm Toibin to discuss “Brooklyn,” the challenges of immigration and finding acceptance in a new place.