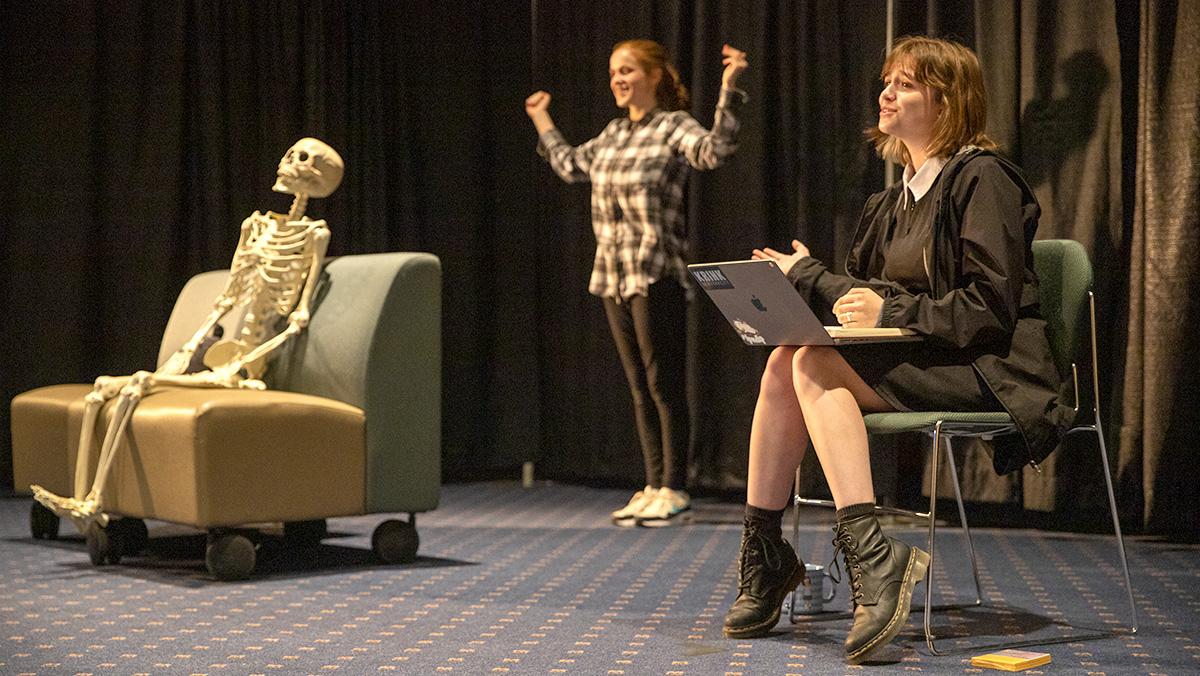 The sound of eruptious laughter and shocked moments of realization are just two of the many ways that audiences reacted in watching five new, Ithaca College student-written plays unfold in front of them. Stories ranging from comedy to drama took center stage in Emerson Suites.

Macabre Theatre Ensemble is a student-run theater organization providing supernatural, horror, horror comedy, science fiction, avant-garde and experimental theater while working collaboratively as an ensemble. Macabre refers to gruesome, disturbing and horrifying depictions of death or injury, and anybody regardless of major can join the Macabre Theatre Ensemble. For Macabre’s 24 Hour Theatre Festival, students are given 24 hours to write, direct and act out their own shows.

Nine writers met the evening prior to the show to write their own 10-minute play following the theme Ghosts in the Eve. Once each show was completed Sept. 9, 10 actors and five directors were randomly assigned to them. Then they met the next morning to start practicing, rehearsing throughout the day to perform that night, culminating in the performance at 7 p.m. Sept. 10.

The first play of the evening, “Merry Murder,” was a comedy directed by senior Matt Reisacher, written by junior Gabby Moran and sophomore Grace Montague and featured performances from first-year student Lee Moran and sophomore Jordan Orlando, portraying the story of a true crime podcast. The host ends up changing the plot every time they tell the story, starting with a basic love story that escalates to dramatic degrees.

The next play, “Pretty Face,” was directed by first-year student Rachel Somers, written by sophomore Connor Stanford and sophomore Meaghan Burke and starred senior Zoe Johnson, junior Gabby Moran and first-year student Teddy Heavner in a twisted, sapphic romance. This dark story follows a murderer who is warned by her former first love about her newly found lover.

The third play, “Paper Crowns,” was directed by senior Rynn Deegan, written by senior Bella Grassia and first-year student Julian Martin and starred first-year students Robyn Jensen and Alexander Blakely. It tells the story of Isaac, who is trying to hide his romance from his family. He ends up encountering a ghost who was murdered for being gay.

The fourth play, “A Visit to the Doctor’s,” was directed by sophomore Max Campion, written by junior Liv Celenza and starred first-year student Meghan Bernardy in a story about a young woman. In this intense story, a distressed young woman comes into the doctor’s office claiming to be followed by a ghost.

Deegan, the artistic consultant with Macabre and a co-producer for the 24 Hour Theatre Fest, said this is the second time Macabre has held the festival since COVID-19. In Spring 2022, the theme for the show was Love & Bones. Deegan said that putting on a show in such a short amount of time allows people who do not have time in their schedules to have an accessible opportunity to be involved with theater.

“It allows everyone to meet each other having these different working relationships,” Deegan said. “I know a lot of us did theater for fun in high school and it can feel so serious in college, especially with the exclusivity of [Dillingham] classes. It’s a great thing that we get some new stories out there, people really get wacky with their concepts.”

“In the past, people had this idea that Macabre just meant gory, bloody, dark humor,” Rivera said. “We’ve been working a lot to really rebrand what Macabre can entail, and working to make it a safer, more active place on campus for everyone.”

Orlando said that feeling the energy from a live audience of about 30 people is what made the experience so unique for her.

“There were definitely lines where there were only a couple of chuckles and that was a little deflating,” Orlando said. “Then there were other times where I would get a kick out of the audience and that always felt good.”

After directing his second play for Macabre’s 24 Hour Theatre, along with starring in “The Rocky Horror Picture Show,” “Carrie” and “Songs of the Damned” during his first year on campus, Campion said that they have gained the insight of realizing that theater does not always have to be perfect.

“Especially with 24 Hour [Theatre], sometimes you’ve got to really let your brains loose,” Campion said. “There’s always things I want from an actor [as a director], but there’s only so many expectations you can have, especially with the outcome. It’s a good lesson just to take it easy and not take everything as a be-all end-all situation.”

Orlando said that each of the plays were very cleverly structured and had something meaningful to say, ranging from themes about death to moving on from the ghosts of your past.

“I think that what was so brilliant was that the writers were able to create and craft a theme and meaning behind this idea of ghosts and also make it extremely entertaining and witty,” Orlando said. “[‘Merry Murder’] was definitely the most overtly comedic of them, with this sort of undercurrent of this idea of sensationalism and spectacle. People will often craft these identities around themselves with overdramatized, real life situations or stories to try and get as much entertainment value as possible.”

As a writing and theater studies student, Deegan said it is often difficult for students to have their work published on campus — especially in the field of playwriting. In addition to the 24 Hour Theatre providing an opportunity for student-written work to be showcased, Deegan said that Macabre is working on putting on two longer student-written plays throughout the semester.

“Macabre has become more and more dedicated to sponsoring student-written work,” Deegan said. “[The 24 Hour Theatre] is a really quick and easy way for us to do that. It allows for people to mess with new ideas, and ideas can spark into bigger ideas as people get creative. Both times we’ve run this event, it’s astonished me the things people will come up with.”