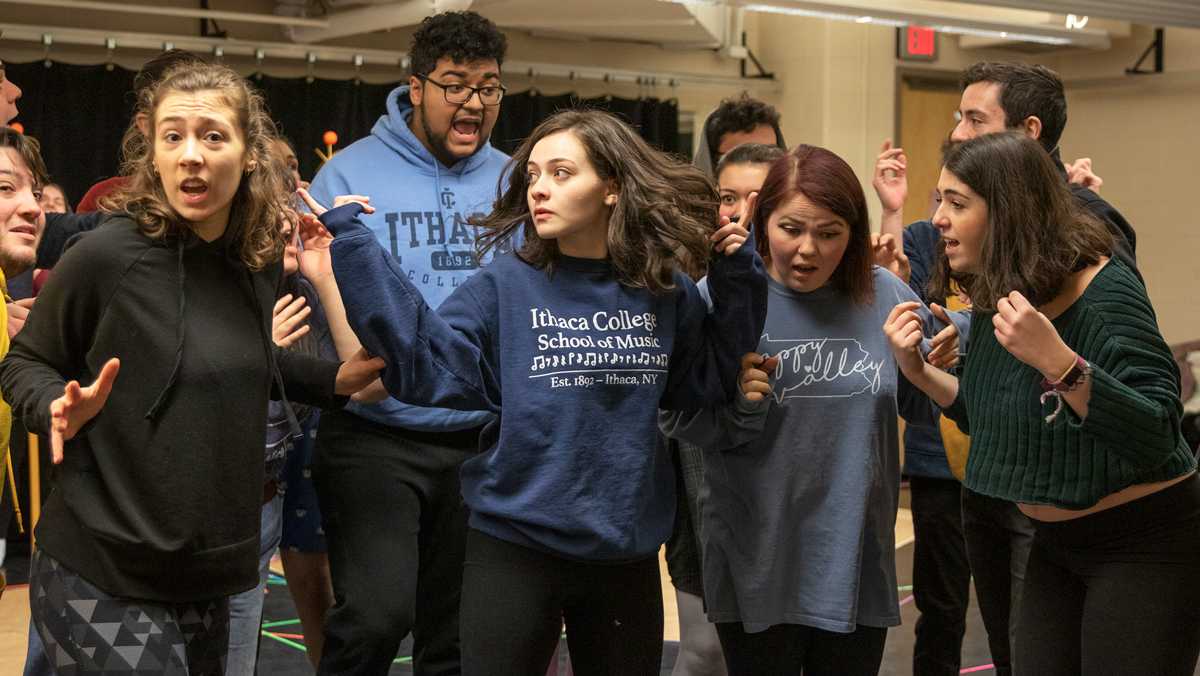 Emily Silver/The Ithacan
The cast of the opera "Dido and Aeneas" rehearse Jan. 25 in The Dillingham Center. "Dido and Aeneas" is one of four shows that will be presented on the main stage Spring 2020.
By Gabrielle Topping
Published: January 30, 2020

A queen fighting for love. A young man finding his place in the world. Millennials adapting to adulthood. The French Revolution. All of these characters and settings will grace the stage during Ithaca College’s Spring 2020 Main Stage Theater season. The scheduled shows are “Dido and Aeneas,” “Pippin,” “Sender” and “Marie Antoinette.”

Tickets for the shows, approximately $10–$20, are sold at the college’s theater box office 12–5 p.m. Monday through Thursday and 12–4 p.m. Friday. They can also be purchased online at tickets.ithaca.edu.

The first production of the season is “Dido and Aeneas” by Henry Purcell. The show is an opera, directed by Norm Johnson, ex-employee associate professor in the Department of Theatre Arts, and conducted by Christopher Zemliauskas, assistant professor in the Department of Performance Studies. The show is a collaboration between the James J. Whalen School of Music and the Department of Theatre Arts. “Dido and Aeneas” is a retelling of an ancient legend, containing elements of Greek and Roman cultures, of the same name. It is about Dido, a fierce queen of Carthage who falls in love with Trojan prince Aeneas. Their love for each other is tested when a sorceress plots the destruction of Carthage. “Dido and Aeneas” explores the dark side of fate, romance and uncontrollable disaster.

The show was first performed in 1689, making it the oldest play being performed on the main stage this semester. Johnson said that he has been interested in the work of original composer Henry Purcell since he was a teenager.

Johnson said if the audience is engaged with the musicianship and spectacle, then it might surrender to the lack of linear storytelling in the prelude. He said the opera is separated into three acts that tell the myth of Dido and Aeneas, and every myth teaches a different lesson.

“What I look forward to each night is being in the room with all these gorgeous voices, singing the work of a composer I have loved since high school,” Johnson said. “I thrive on the challenge of creating an event that will always be performed live and will rely on the use of living stagecraft to convey the message of the piece.”

“Dido and Aeneas” opens Feb. 18 and runs until Feb. 23 at the Hoerner Theatre.

“We’re taking a different approach to the script, different than the original production and the revival by trying to find ways for the production to speak with this generation of students,” Mayer said.

Commonly, “Pippin” is performed with circus-inspired costumes and set pieces. Instead, Mayer has modernized the show by making the protagonist a recent college graduate trying to find his purpose, identity and meaning in life.

“Pippin is at a crossroads in the show,” Mayer said. “This journey is the same that every student at Ithaca College is about to encounter, so it’s our hope that current students will be able to identify with Pippin. … I’m looking forward to working with the students in a production context and see how they pull the learning they’re doing in their classes into the rehearsal hall.”

“Pippin” opens March 24 and runs through April 4 in the Clark Theatre.

The third production is “Sender,” written by Ike Holter and directed by Marc Gomes, assistant professor in the Department of Theatre Arts. “Sender” is a story about a man named Lynx who returns to civilization after forgoing all technology and human contact. Gomes said the play follows four people in their early thirties, who, for different reasons, refuse to accept the responsibilities of adulthood. Holter places the four characters in a world where tweets, Instagram posts and text messages are more important than in-person interactions.

“With ‘Sender,’ hopefully the audience will see themselves in these four characters and be able to laugh at the situation the characters find themselves in,” Gomes said. “‘Sender’ is constructed with both naturalistic and absurd elements in the text. The absurd elements bring humor, and with humor comes an ability to see our actions more clearly.”

Gomes said theater and this particular show make people question convention. He said that every time he reads the script, he still enjoys the unexpected turns the story takes.

“Witnessing [the characters] work together to solve the particular questions of this play is going to be thrilling,” Gomes said. “I’m excited about collaborating with the design, technical and management personnel and integrating our work with that of my work with the actors.”

“Sender” opens April 10 and runs until April 18 in the Earl McCarroll Studio Theatre.

The fourth production is “Marie Antoinette,” written by David Adjmi and directed by Dean Robinson, assistant professor in the Department of Theatre Arts. “Marie Antoinette” follows Antoinette as murmurs of the French Revolution begin to circulate. The play is described as a satirical comedy that reflects modern America through an 18th–century, French lens.

“I feel like everyone knows who Marie Antoinette is but only as the ‘last queen’ of France, who wore big wigs and said, ‘Let them eat cake,’” Robinson said. “This production gives us the opportunity to bring out more of the character. … I hope that the audience will be excited about the theatricality of the play and that they will find something new about the way they perceived the climate of the downfall of the French monarchy.”

Robinson said he enjoys re-examining what is commonly known about the time period. He also said he wants to implore audience members to question what they might already think they know about Marie Antoinette.

“Marie’s arc is quite exciting,” Robinson said. “From the moment she was brought over from Austria to her final moments in prison presents an incredible journey that compels us to ask a lot of questions about what really happened and who was responsible.”

“Marie Antoinette” opens April 21 and runs until April 26. The theater is to be determined.