Ithaca College sophomore Lucia Tepper sits in her dorm room, a light and tripod pointing toward her. A row of clear boxes filled with brushes, lipsticks and palettes line the desk in the background.

“Hi guys,” she says to the camera, addressing the thousands of followers subscribed to her YouTube channel, LuciaTepperBeauty. “My name is Lucia, and today I’ll be showing you my makeup and beauty empties.”

She rummages through a bag in her lap, holding up finished mascara containers, lip gloss tubes and blush palettes. She shows each containers’ empty contents to the camera, reviewing her experience with each product. Her resulting video, “Makeup and Beauty Empties! November 2018,” has 3,895 views as of Nov. 6.

Tepper is one of the thousands of beauty vloggers on social media, particularly on YouTube. These vloggers, some of whom are self-proclaimed “beauty gurus,” post videos of themselves creating makeup looks and reviewing products. The most subscribed-to beauty vlogger in the world is Mariand Castrejon Castañeda from Mexico, whose channel, Yuya, has approximately 22.5 million subscribers. Some of the most popular English-speaking beauty gurus are Zoe Sugg, whose Zoella channel has nearly 12 million subscribers, and Jeffree Star with approximately 11 million. 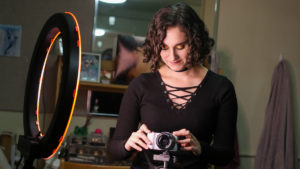 Tepper began her YouTube channel three and a half years ago, initially as a channel sharing videos of her singing. She then changed her mind, deciding to become a beauty vlogger after watching uploads from others in the makeup community.

“I started off just wanting to be a beauty guru,” she said. “I wanted to have a gigantic makeup collection. I wanted to do tutorials and everything.”

She said her channel had 1,000 subscribers until she began a series “Makeup Your Mind” in January 2018. Often to fund buying makeup, some beauty vloggers receive public relations packages of sponsorships or receive payments from advertisements on their channel. While most beauty videos focus on new products, Tepper’s series criticized beauty vloggers’ sponsored products and consumerism. Within a month, she gained 30,000 subscribers. Currently, LuciaTepperBeauty has 31,948 subscribers as of Nov. 6.

One of the more popular topics for beauty videos is “hauls.” YouTubers buy multiple products at once, often from the same makeup brand, and review them. Many haul videos advertise, with aggressive capitalization, the amount of money spent on higher-end brands. Jeffree Star’s video is titled “$2,500 ULTA DRUGSTORE HAUL! | Jeffree Star,” while another channel, COSMEHOLICS ANONYMOUS, posted a video titled “I ACCIDENTALLY SPENT OVER $1000 ON FENTY BEAUTY! (HAUL, PRICES & SWATCHES).”

“Getting something that’s worth money is like a special occasion,” freshman makeup fan Hannah Brule said. “Then you have that one palette that you love showing people.”

Tepper said her constant consumption of makeup made her anxious, and she began doing “anti-hauls,” where she shows reasons not to buy new things, instead focusing on anti-consumption. She said she’s also done “product panning,” which focuses on “hitting pan” on products, or reaching the bottom of the container and using all of the product available.

She said her series was controversial. Previously, Tepper had released videos that criticized other beauty gurus for accepting PR packages, or sponsored products brands send to review, and advocating constant consumption. She began receiving critical comments, video responses and death threats in the comments of her videos when she later began accepting sponsored products. She said in a video that “anti-consumerism” means being a conscious consumer of products, and she wanted to focus on using and reviewing products while raising awareness of advertising techniques in sponsorships.

“My content is very controversial, which is ridiculous because it’s makeup,” Tepper said. “I never want to cause drama. I just speak my truth, and I really just want to stop people from spending a ton of money and having anxiety. But a lot of people … found things I said controversial.”

Senior Abiola Tubosun-Kassim runs a beauty and lifestyle YouTube channel as well, although her main platform is Instagram. Her Instagram account abiolakassim.mua features bright blue, pink and orange blended eyeshadows and golden highlights. She has a series called #RemixFriday that she uses to recreate makeup looks from other Instagram makeup artists.

“I feel like, for me, it’s more of an art,” she said. “And it allows for myself to feel beautiful, and I get to make other people feel beautiful.”

Tubosun-Kassim said she does makeup for clients on campus and in New York City. She began taking clients in February 2017 and said she charges $30 to $40 per session, usually lasting an hour.

“I try to make it affordable because I know for college students, it’s not that easy to come by for money,” she said. 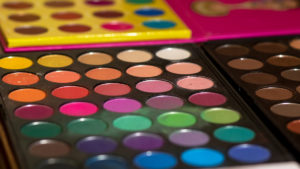 Tubosun-Kassim says she uses bright colors in her makeup looks. She says she views makeup and beauty as a form of creative expression. (Julia Cherruault/The Ithacan)

The high-end makeup brands many beauty gurus use in their videos are notoriously expensive. So, how much do beauty fans spend on makeup?

“Don’t even ask me that question,” said junior Margaret Tippet, beauty editor of Distinct Magazine. She said she watches beauty vloggers for product reviews to keep up to date on product releases and to decide what drugstore makeup is good quality.

Tippet said that at her peak of using makeup, she would spend $100 a month on beauty supplies. Tubosun-Kassim said her most expensive makeup purchase was Ulta’s Too Faced Sweet Peach Palette, costing $42. The most expensive product on Ulta’s website is $195 for a collection of liquid lipstick. On Fenty Beauty, another high-end makeup brand by pop star Rihanna, a highlight brush goes for $32.

“It’s really expensive,” Tubosun-Kassim said. “I usually just stick to drugstore– friendly stuff from Target or Walmart or stuff like that because it’s really expensive, and sometimes, I don’t have the money to spend on it. So I just try to get it as cheap as possible.”

Tubosun-Kassim also said that there can be limited shades available for darker skin tones. She said as a black woman it can be hard to find her shade range, particularly in higher-end brands, but also in drugstore makeup aisles. The lack of diversity in makeup shades has been discussed by other beauty YouTubers as well. Vlogger Jackie Aina uploaded a video in January 2018 that addressed the lack of products that matched dark skin.

“I feel that with the more high-end … stuff, it’s really hard to find your shade range, and even sometimes with drugstore makeup it’s hard,” Tubosun-Kassim said. “I know there’s this Maybelline Super Stay Foundation that they came out with, and I couldn’t find my shade, and in order for me to have my shade,I would have to mix two colors together. So sometimes it is hard finding the right color, but then there are brands like Fenty Beauty who have the full range for women of color.”

Along with the limited diversity in product shades, another criticism of the beauty industry is its rebranding as feminist. Many beauty gurus have posted about makeup’s empowering effect, like vlogger NikkieTutorials’s upload “ENDING MAKEUP SHAMING!” Others view beauty brands taking advantage of women’s insecurities and need for validation to sell more products. A 2016 study showed that women who wear makeup earn more than women who don’t, and some women say there is pressure to wear perfect makeup.

“It’s kind of f—-–, but it gives you confidence, obviously,” freshman Justine Brady said. “… I think it’s that a lot of the time, makeup artists make this image of themselves that they always look like this, like they always look perfect … when in reality, you need to show that that’s not real.”

Tepper said she used to feel uncomfortable walking around without makeup when she first became involved in the beauty industry. However, she said she now views makeup as an art form and way of expressing herself.

“I think when I first got into it, I got into the idea of I have to do this to look good,” Tepper said. “… It can feel like that, especially if you don’t have self–esteem by yourself, which I didn’t. And then, I took a break from makeup, and when I came back to it, I came back to it as an artistic outlet. And like, I want to learn skills and be good at something, and then that’s when it switched.”

Tubosun-Kassim said she doesn’t think of her makeup use as a feminist statement but another avenue for expressing personality. Equally as prominent as natural makeup looks are dramatic, costume-based makeup tutorials.

“I think makeup is more about expressing yourself,” Tubosun-Kassim said. “You can do so many things with makeup; re–create movie characters and Disney characters and stuff like that, or some people use makeup to write expressions for social justice. … You can use whatever your passion is and express it through your makeup.”