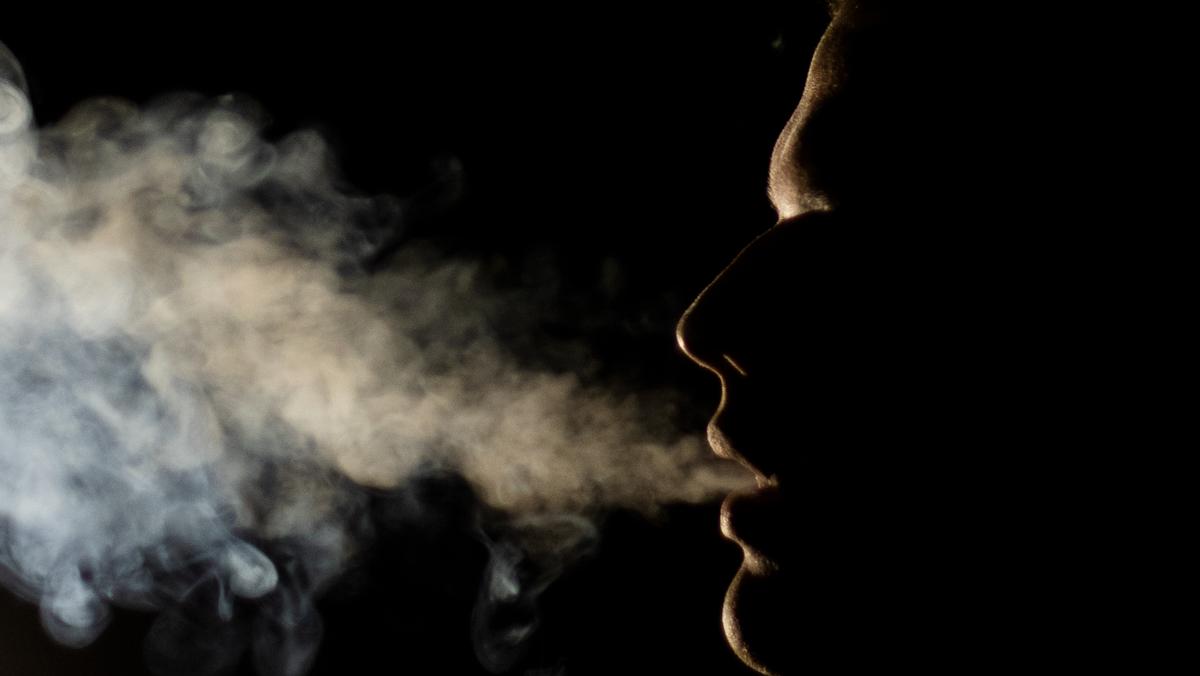 Lilflower, an Ithaca College student and musician who prefers to go by their stage name, wrote a song. It hits close to home, detailing one of the most important relationships in their life. It ends with a plea:

Their song — which they describe as a “meme song” with depth — is two things: The first is a gay love song, and the second, and more apparent, is an examination of their relationship with Juuling and addiction. Unlike many Juul users, Lilflower uses the e-cigarette for its intended purpose: to fulfill their nicotine addiction without depending on cigarettes.

But Juuls aren’t popular because they’re a “safer” substitute for cigarettes. They’re popular, at the college and beyond, because Juuls are an e-cigarette for the iPhone age — a vector for nicotine with a flashy technological finish. The device is tiny, dark and long: able to fit in a pocket or a balled-up fist. Often, you’ll see someone puff a cloud of scented vapor and never see the source, making it popular among high school and college students who have to skirt the 21-year-old age requirement to procure a Juul.

For some, like senior Mike Hanlon, the futuristic design made Juuls enticing.

“There’s this appeal to them just on the sleek technological appearance to them,” Hanlon said. “So I was like, ‘I want to give that a try.’”

Juul users take ownership over their devices, often customizing them with stickers or giving them names. Hanlon’s, for instance, was named Juulapeno. 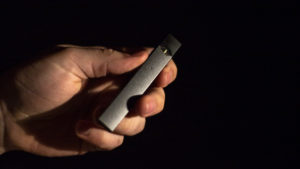 Juul founders say their e-cigarette is designed for smokers attempting to quit cigarettes, but high school and college students are drawn to its accessibility and flavors. (Julia Cherruault/The Ithacan)

James Monsees and Adam Bowen created Juul in 2015 because they wanted an e-cigarette alternative that would help smokers wean themselves off of cigarettes. The company has been upfront about its intentions, discouraging unnecessary Juul use with warnings on its website, age restrictions and numerous public statements about the addictive nature of nicotine.

Juuls lack the toxic slurry contained in cigarettes, but they still contain nicotine and are extremely addictive. Nicotine is the addictive component of cigarettes, creating a dependency in smokers and Juulers. When users intake the chemical, their bodies release dopamine and adrenaline, increasing their blood pressure, heart rate, breathing and need for another hit. Juuls are especially addictive. While a cigarette contains about 10 mg of nicotine, a 3 percent Juul pod contains 23 mg and a 5 percent pod contains 40 mg.

David Ashley, research professor at Georgia State University who spent 27 years at the Center for Disease Control and Prevention and spent years studying the effects of tobacco, said because cigarettes burn between puffs, some of the nicotine is lost with the cigarette, but Juuls only activate when sucked, therefore, Juulers absorb the entire nicotine content of a pod.

Unlike other cigarette alternatives on the market, Juuls use nicotine salt, a substance that allows a Juul to deliver nicotine to the system more quickly than many of its competitors.

For ex-smokers, the nicotine rush is a benefit, but for young people who’ve never smoked, it’s dangerous. Like any drug, the faster the delivery the more intense the addiction, so nonsmokers who take up Juuls will likely get hooked fast and hard.

“Just like cigarettes were marketed, [Juul] marketed to young adults,” Ashley said. “And teenagers love whatever a young adult wants, and a teenager wants to do the same thing. And so, all the ads had 21– and 22-year-olds having a great time and having fun with their Juul.”

Finally, with a Food and Drug Association ban on flavored e-cigarettes looming, the company took action. On Nov. 13, Juul announced it would limit its social media presence and monitor third party–produced Juul content — a tough task given that there are thousands of unofficial videos on Youtube, Snapchat and Instagram of underage Juulers.

Juul will also restrict the sale of flavor pods, only keeping menthol, mint and tobacco flavors in stock at retail locations. For months, the FDA has been critical of the accessibility of flavored e-cigarette pods, and many public health officials cite flavor pods as a factor in Juul’s popularity among underage users. A 2015 American Medical Association study of people ages 12 to 17 found that 81 percent of users surveyed used flavored e-cigarettes because “they come in flavors I like.”

Ashley said Juuls can be helpful for smokers who want to quit but are damaging for nonsmokers who start Juuling. A study Ashley co-authored in 2018 found that 50 percent of smokers who take up Juuls end up as dual users, while less than 10 percent switch exclusively to Juuls or quit nicotine completely. That’s the real danger, and unfortunate irony, of Juuls — they’re a gateway to cigarettes which contain toxic, life–threatening ingredients.

Though much is known about the adverse effects of nicotine, less is known about the impact of chemicals in Juuls and other e-cigarettes. A study published in Tobacco Control, a scientific journal dedicated to understanding the effects of tobacco products, compiled and analyzed over a dozen studies on e-cigarettes. While it didn’t find any negative consequences to e-cigarette use, the author also cautioned against making broad generalizations because the current pool of research is relatively small.

Even the economic benefit of Juuls is dubious. Everything from the price model to the pod flavors are intended for ex-smokers. A starter kit — a Juul device, charging dock and four 5 percent nicotine strength pods — costs $50, while pod four-packs cost $15. For reference, the average cost of a pack cigarettes in New York state is $12.85.

But for smokers looking to switch, a pod is not necessarily a better economic choice. Junior Jackie Gray said that she went from smoking a pack of cigarettes a month to a pod a week, averaging out to a slightly greater cost.

“It’s so easy to go and smoke anywhere that it kind of made it an everyday thing — every hour pretty much,” Gray said.

That cost doesn’t factor in the number of people who bum hits of someone else’s Juul. By their count, at least 10 of Lilflower’s friends rely on their Juul and don’t own one themselves. They said it’s worse at parties — even passing acquaintances hound them for a hit.

Juuls have replaced cigarettes as a drunken vice. A Juul is modern and “cool,” and until recently, its pods came in eight flavors so users could get an intense nicotine headrush while tasting mango or cream. And, if they know a good third–party seller, they can buy a cannabidiol pod, a cannabis product that induces the relaxing and pain–relieving effects of marijuana without the high.

But Juuling isn’t limited to parties and late-night, intoxicated adventures — it’s prevalent during daylight hours, too. Freshman Nile Gossa-Tsegaye doesn’t Juul but has many friends who do. Like many other students, they’ve seen people Juuling across campus: in libraries, classrooms and hallways.

“I think it’s because you can Juul inside and you don’t have the scent that a cigarette does have,” Gossa-Tsegaye said. “Sometimes [Juul vapor] does smell pretty good. Like, a mango Juul is not that bad, right?

Lilflower knows they shouldn’t Juul, but quitting isn’t that easy.