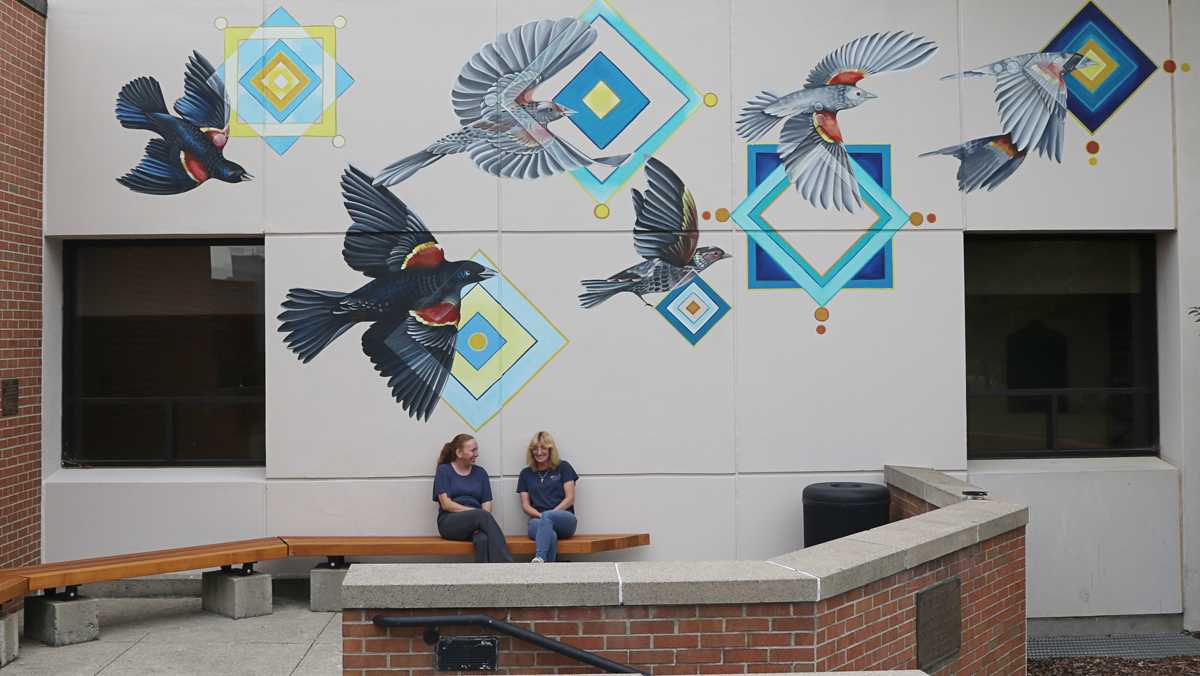 Abbey London/The Ithacan
Seven red-winged blackbirds soar across the back of Egbert Hall, near the Free Speech Rock. The mural was painted by Nani Chacon, who worked to make the mural compliment the student body and its important location.
By Avery Alexander — Life & Culture Editor
Published: August 29, 2019

This June, the Ithaca College community received a new addition to its scenery: a vibrant mural of soaring birds on the wall next to the Free Speech Rock.

The mural is by artist Nani Chacon, who is based in Albuquerque, New Mexico. Mara Baldwin, director of the Handwerker Gallery and an acquaintance of Chacon, had the idea of collaborating to make a mural. She approached Chacon with the prospect of creating a piece for the college. Chacon traveled to the college in November 2018 to discuss injustices against women of color and speak about some of her work at the Center for the Study of Culture, Race and Ethnicity Discussion Series. Baldwin said this visit allowed Chacon to gauge what sort of art the community wanted to see.

Chacon’s early plans for the mural were displayed in the Handwerker Gallery’s Spring 2019 exhibition “Process.” Baldwin said that Chacon came up with three mock-ups for the mural based on the information Chacon gathered in November. Baldwin said gallery visitors were allowed to view every design and decide which one they thought represented them the most and which location on campus suited the mural.

“[Baldwin] was interested in … fulfilling the full process of my work, taking part in the community engagement side and getting input from the students and faculty,” Chacon said. “I think that was part of her vision, to really understand the power of art and how art can change a space, facilitate a space and rally and engage people within that space. So we began there.”

Baldwin said that in the early stages of the mural project, it became apparent that the Free Speech Rock was the best place for the art to go.

“Last year was actually the graduating class that undertook much of the student activism on campus,” Baldwin said. “[It was] the student activism that led to the resignation of the former president of the college and a lot of other changes that really have continued to push forward since their departure from campus. … We were really trying to both memorialize those actions but then also continue activating the space –- making the space inviting for future student activism.”

Besides helping to decide the location of the mural, the student feedback also helped Chacon choose which of the three designs best suited the campus. After students and faculty offered their opinions, Chacon settled on the final piece in the location today — “Congruent.”

The mural features seven red–winged blackbirds flying beside yellow and blue angled shapes. Chacon said she chose these particular birds for this piece because they are native to the area and are flock birds. Chacon said that when she saw the support the campus community had for people to come together in strength, she felt the red–winged blackbird was a perfect representation of the college.

“[When] two angles are congruent, they meet in a space,” Chacon said. “And I thought about that really as being the idea for the piece is having this space that is active … but also it being this opportunity for people to bring their ideas, their aspirations, their motivations and maybe even their conflicts … and have it be met by other people.”

In the City of Ithaca, there have also been efforts to create more public art projects. These efforts are primarily undertaken by Ithaca Murals, an organization that works to use murals to tell the stories of the diversity in the community.

“Murals, at worst, can be used as tools to gentrify communities,” Caleb Thomas, organizer of Ithaca Murals, said. “But then, murals can also have an opportunity to be art in the public that inspires resistance. … There’s something special about that Free Speech Rock area, and there’s such a history of students’ strength and engagement.”

After Chacon’s initial visit to the campus in November for the Discussion Series, Baldwin set out to find funding for the execution of the project. Baldwin said that in December, she submitted the project to the Presidential Seed Grant, an initiative to help fund innovative and collaborative ideas. When the mural was awarded the grant money, Chacon traveled back to campus, and the process of painting began.

“Art has an incredible ability to add to institutional spaces and facilitate thinking,” Chacon said. “And I think when that happens with my work, I’m most happiest. That’s where I want it to be. I want it to be in places that can promote thoughts and promote thinking. … Anytime that that can happen, … I think that that makes my work the most powerful.”

Art class exhibit may be last at Creative Space Gallery

ICTV show invites students to try their hands at animation