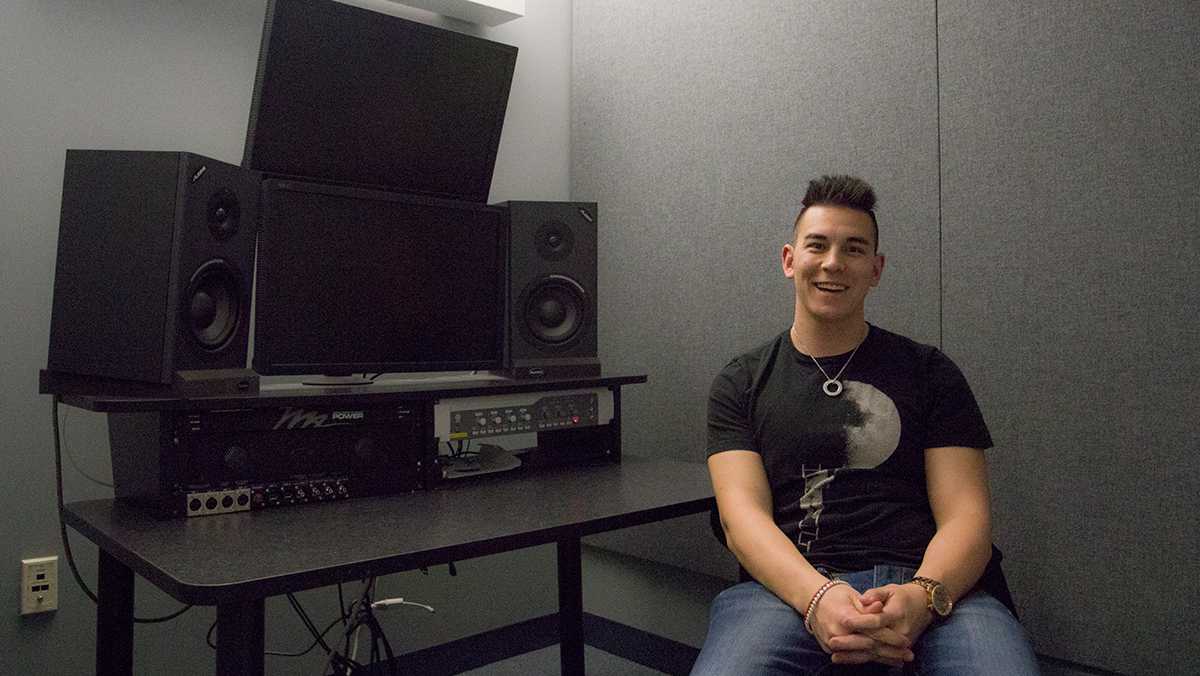 On-campus organizations like ICTV and Park Productions provide opportunities for students to learn production skills outside of the classroom. However, a few students still felt there was another way to learn.

In Spring 2015, ACE TV, a music video production organization, was created as an alternative way for students to explore the production field. The group invites local musicians to participate in a free live recording of their work and then uploads it to ACE TV’s YouTube account. So far, there are over 30 videos uploaded of covers, original works and band performances.

Junior Mitchell Straub created ACE TV to be an alternative to the other production groups within the Roy H. Park School of Communications. He said outside of joining groups like ICTV or helping someone on a production for their class, there weren’t many other options for production experience.

“I asked a few cinema friends what they thought about having a real-world equivalent of doing live recordings because at the time there was only a cinema equivalent of academic films, or for a TV real-world equivalent, you did ICTV,” Straub said. “I thought this would be a great way to still have the same skills you use in the academic side of Park, but also incorporate some real world [experience]. Kind of like another avenue for using the tools.”

Straub said he began by asking his friends for musicians interested in being recorded. He said it was initially difficult getting people interested in helping out and finding artists to record as a new organization, but as word spread, people began coming to them.

Christopher Wheatley, manager of television and radio operations at the Park School, said ICTV, WICB and VIC operate more like pre-professional organizations instead of clubs and strive to create real-world, supportive environments for students to work in. He said being in the media industry at this time is new and exciting and wishes the best for new organizations.

“One of the many wonderful aspects of the Park School and the college is the freedom and support that allows students to try new approaches and new media,” Wheatley said. “I think some of these start-ups are more successful than others, but I fully support as many people as possible participating in media, whether through our well-established organizations or new ones.”

Sophomore Matthew Blezow was one of the core production members during the club’s inception. Blezow said he learned about Straub’s idea after working with him on an ICTV show.

“It was a good environment,” Blezow said. “All the people we worked with were very happy to have a video made for them. … I really do think it’s a good alternative to ICTV. We go at our pace. There’s no pressure to get something done by a hard deadline.”

He said the artists they filmed were enjoyable to work with and carried themselves in a professional way. It was also fun to work with students outside of the Park School in a creative way, he said.

Junior Harrison Lindsay recorded his first session with ACE TV in January 2015. He said he was introduced to the group when he was approached after a performance at an open mic night. After their meeting, Lindsay went on to record with them multiple times during the spring semester.

“I actually read something in The Ithacan about a new music production group, but they actually approached me at an open mic night,” Lindsay said. “So I took that ball and ran with it. … At my first session, Mitch was OK to work with, and the other people that were there were good to work with as well.”

Straub said the process for recording videos is relatively simple. He first meets with the musicians a week prior to the actual filming to go over what they’ll play and the details of what the shoot will be like. On shooting day, it takes about 3 1/2 hours to set up, record the performance and break everything down. He said he prefers to film live performance music videos as opposed to story-based because of the time it takes to film the different styles.

“Story-based music videos are really hard to do,” Straub said. “You can’t pump out 30 story music videos in a semester, regardless of who’s working on it. We were able to do one story-based music video. … We do them live because it’s easier to take the three or four camera angles that we have and edit the audio file. It’s a really easy workflow.”

After a hiatus last semester due to Straub’s studying abroad, he said ACE TV plans to resume activity this year. While he is the only current member, he said he hopes to get people interested in the club again to make for a successful semester. Blezow said he plans on continuing to work with the team as much as he can, and he encourages both Park and other students to join.

“I think it’s good to have other options,” Blezow said. “I think a lot of people don’t get on the shows they want to with ICTV or get a shift on the radio, and this is just something else they can do.”