In the mystical land of Equestria, ponies, pegasi and unicorns study and learn the magic of friendship. Though this vision of pony-paradise is not something of myth: This is the premise of “My Little Pony,” a children’s series initially aimed at young girls that has gained a passionate fan base of college-aged males, comprising the budding “brony” subculture. However, these pony-loving fans have encountered a hearty dose of criticism, which has sparked conversations over social and gender issues.

The term “brony” is used to describe a male who enjoys the cultural fan base of the television series “My Little Pony.” The term got its start through the Internet, on sites such as Reddit and 4chan, and is a mashup between “bro” and “pony.”

Launched in 2010, the latest installment of the popular franchise is “My Little Pony: Friendship is Magic,” a television show produced by Hasbro Studios that has gained an increasing amount of notoriety in Internet culture and has brought new attention to the series. Its popularity is evident on the Web, with the Bronies Facebook page boasting over 70,000 likes. The cultural phenomenon and lasting effect of “My Little Pony” has exploded into more than just a television show for young children, but rather into one appreciated by a far-greater range of age groups.

Junior Sam Kamenetz identifies as a brony and said his brony persona goes beyond simply watching the series on television: Kamenetz embraces every aspect of the brony fandom, including writing fan fiction based on the series.

“I kind of have my own definition of brony that I feel like you won’t see online,” he said. “I’m just basically someone that’s kind of — obviously — an older fan that is into the fan culture as well as the show: the fan fiction, the fan art, the fan music. All the trimmings of the fandom.”

The main characters in the television show, “My Little Pony: Friendship is Magic” include Twilight Sparkle, Pinkie Pie, Fluttershy, Rainbow Dash, Applejack, Rarity and Spike. Viewers band of ponies as they embark on many exploits and adventures throughout Equestria. Their personalities vary, from the brave and loyal Applejack to the brash and competitive Rainbow Dash. Kamenetz said each of these characters prove to be well developed and possesses his or her own unique personality, singling out Pinkie Pie, who is the more goofy and energetic of the characters, as a particularly dynamic example.

“Pinkie is the contrast between the shallow surface character and this weird insecure hidden depths to her,” Kamenetz said. “You see this with all the ponies. It’s nice to see them grow as characters. You feel like you’ve known them.”

The fandom of “My Little Pony” has established a strong community, both on and off the Internet, as there are conventions and meetups for the brony culture. Among these are BronyCon, a yearly, East Coast event where thousands of bronies from across the country come and talk about the show, share creative work based on the franchise and purchase merchandise. Last year’s BronyCon, held in Baltimore, Maryland, reported over 9,600 attendees.

Though not all fans of “My Little Pony” consider themselves part of this army of enthusiasts. Sophomore Jordan Kolb, despite being a fan of the show, does not consider himself a brony. He said the quality of the program itself draws him in, but has not driven him to embrace the rest of the fandom.

“I just call myself a fan of the show,” Kolb said. “I’m not really part of the fandom as a whole. I think it’s a really well made and people who work on the show put a lot of effort into it, but I don’t think I’m so into it that I would call myself a brony.”

Though Kolb does not see himself as a brony, he would still argue that the show is a good example of quality cartoons and has the potential to bridge across generations.
“The best kind of cartoons are the ones that a kid and an adult could both watch at the same time and equally enjoy,” Kolb said “And when you’ve created something to bridge the gap between child and adult, you’ve created a good television show.” 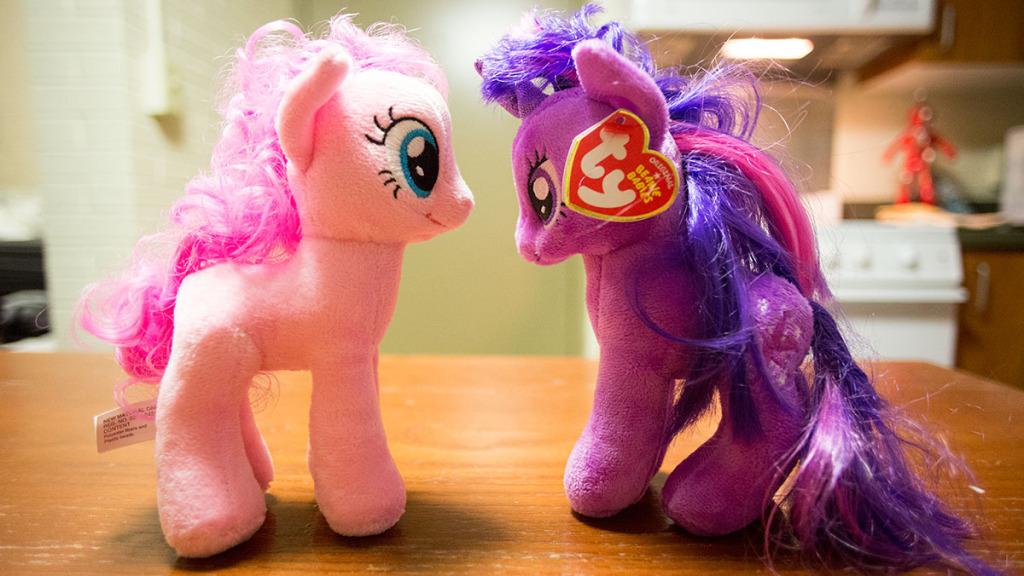 Merchandise, like these “My Little Pony” Beanie Babies, are just one facet of the Brony fandom. AMANDA DEN HARTOG/THE ITHACAN

The franchise’s origins trace back to the 1980s, when the company Hasbro established two franchises with separate audiences in mind: “Transformers” and the first generation of “My Little Pony.” Boys were expected to play with and watch “Transformers,” while girls would play with “My Little Pony.” However, in today’s market, demographics have changed, notably with older male audiences — bronies — becoming fans and creating communities around the series.

Despite its many fans, the brony culture has received much criticism for engaging with a product originally intended for young girls. Jaime Warburton, assistant professor of writing and the instructor for the seminar Fantasy, Fandom, and Fans: Exceeding Our Own Lives, said the stigma people have for certain fandoms comes down to issues dealing with gender.

“I think it’s all about gender policing,” Warburton said. “These issues are not because someone thinks this show is stupid, but rather because they think this show is stupid because it’s for little girls. Therefore, if you’re not a little girl, and you like this thing, they would think something is wrong with you.”

Sophomore Rachel Silverstein, also a fan, does not identify as a “pegasister” — the moniker given to female fans of “My Little Pony”— but rather as a brony. She said in a fandom of gender acceptance, having two separate terms to describe a fan is unnecessary.

“I identify as a brony,” Silverstein said. “I recognize the title of pegasister, but I think that it is kind of silly to have a fandom that stands for gender acceptance and have gender-specific titles for members of the same fandom.”

Kamenetz said “My Little Pony: Friendship is Magic” offers up themes of feminism and gender equality.

“I’ve heard people say that it’s actually a feminist show because … it kind of shows that each of the main characters show a completely different way that you can act, saying there’s no ‘this is how you be a girl,’” Kamenetz said.

Although Hasbro Studios markets the show for girls ages 4–7, Silverstein disagrees with this contrived, age-specific demographic and said she sees “My Little Pony: Friendship is Magic” as a family television show meant to be watched and understood by the entire family rather than specifically by young girls within the families. She said the consumer culture in general has greatly separated the genders, creating a gap between male-specific and female-specific items.

“It would be better if there were more options for both genders,” Silverstein said. “[The consumer markets] are beginning to get into it with the girls and the strong female characters, but they are not quite doing the same for boys in letting them have more things that are considered feminine, like having boy-baby dolls for them to practice being adults, like kitchen toys to play with.”

Aside from gender-specific criticism, another accusation that bronies face is in regard to material on the Internet that exploits the ponies in a sexual way, with some fans creating pornographic images of the series’ leading characters. Senior Jamie Swinnerton, who considers herself to be a fan of the show, said the bronies who depict the characters in this way make her uncomfortable.

“I find it disturbing when I see that bronies produce stuff about sexualizing ponies,” Swinnerton said. “It’s definitely something I don’t agree with. I don’t understand. It was built for little girls and taken over by male fans. So if an adult male fan wants to enjoy ‘My Little Pony’ without sexualizing them, go for it.”

Kamenetz said he has had mixed reactions from people that have struggled to understand his point of view on the series, instead opting to focus on the sexualization in the brony fandom.
“I’ve definitely gotten negative reactions from people,” Kamenetz said. “There is this whole stigma that you’re sexually attracted to ponies. There’s stigma around an older man watching a show targeted at little girls. I kind of understand, but it’s a show.”

Despite criticism he has received, Kamenetz said the breakthrough of the brony culture may pave the way for people to explore and discover new cultures and fan bases that they might not have experienced otherwise. Ultimately, he said skeptics should have an open mind and simply take the time to try “My Little Pony” out before passing judgment.

“I feel like the writing of the show, especially the first two seasons, speaks for itself,” Kamenetz said. “And if you come to it with even a little bit of an open mind, I think you’ll be surprised and see why it has attracted such a following.”