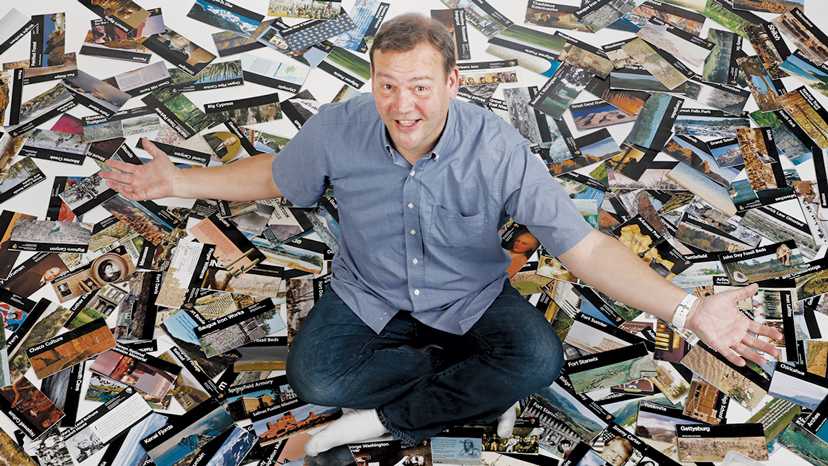 Ari Kissiloff, assistant professor of strategic communication in the Roy H. Park School of Communications at Ithaca College, has been to 325 of the 409 sites and 51 of the 59 national parks administered by the National Park Service. Since 2010, Kissiloff has been a member of the National Park Travelers Club, a non-profit social organization that provides networking and recognition opportunities for those who enjoy visiting America’s national parks. He has designed and published its newsletter and has received its silver 200-park award and its gold 300-park award, lifetime achievement awards from the NPTC given to those who visit a high number of national parks .

Staff Writer Ashley Wolf spoke with Kissiloff about his experience at the national parks and the freshman seminar he will teach next fall on the subject.

Ashley Wolf: What is your main goal when it comes to national parks?

Ari Kissiloff: I’m trying to visit all of the national park service sites, but they just added another last week. Obama has designated a couple of them, and this one just came up. There are three new national monuments in California.

AW: What made you want to travel to all of these sites?

AW: When do you usually travel to these places?

AK: I have the summer off, being a college professor, and just at some point, I wanted to go travel. I had friends who wanted to travel and/or friends who lived out west to visit. Then, when you look at the guidebook for what to do, you’ll find all kinds of things, but pretty consistently, you’ll look at national parks, and they’ll be rated very high.

AW: What do you do when you visit a site?

AK: Most people who go will get off the bus, walk to the thing, take their picture and go. My favorite thing about Mount Rushmore was going on this trail that got you closer to the mountain and went through some caves. There were cool views of the presidents from the caves, but no one was on that trail. People say they go to the Grand Canyon, but they really drive to the parking lot, look at the edge, take a photo, make a Thelma and Louise joke, and then they keep going to wherever they’re going. To me, a visit can’t just mean I just put my foot into the thing and say I’ve been here. I have to do something.

AW: When people travel, do you suggest a plan for the sites?

AK: If you’re going to get in the car for 30 days and you don’t have a specific plan of what you’re going to do, it’s nice to have some scaffolding around it, like some generalities. These provided a good generality. … A lot of these places allow camping, which was a lot cheaper than staying in a hotel. It was about money, time and maximizing going to places that were the most notable.

AW: How does a site administered by the National Parks Service become a national park?

AK: In order for something to become a national park, it means it’s something very special. [Sites] start out as a national monument, and then they have national preserves and historic sites, but national park is like the top of the chain.

AW: Do the sites have any similarities to one another?

AK: All of their maps use all of the same conventions. … Every time you go somewhere, you don’t want to learn a new map. … Every map of every park uses the same font and the same [key].

AW: What have you learned the most about through traveling to different parks?

AK: A lot of these parks are commemorating things that are actually really embarrassing, but I’ve always thought that it was cool that the government is like, “Yes, we’re going to talk about this. We’re not going to hush it up. This is somewhere that something really terrible happened.” Some of these things are about beautiful nature, and some of them are about things we’re really proud of, and then some of the things are about things we’re really not proud of. This got me into history because it’s not a book. I’m going places.

AW: Do you have any favorite National Parks Service site?

AK: It’s like trying to answer “Who’s my favorite kid?” I could name 20 people must visit, but they’re all different.

AW: Next fall, you want to start a freshman seminar on national parks. Can you explain that a bit?

AK: I’m still working on it. I don’t have a lot of details. I teach communication and design courses, so it’s going to be about how the parks use design and communication like the maps that are consistent to promote the parks to get people to interpret the history and help people navigate.