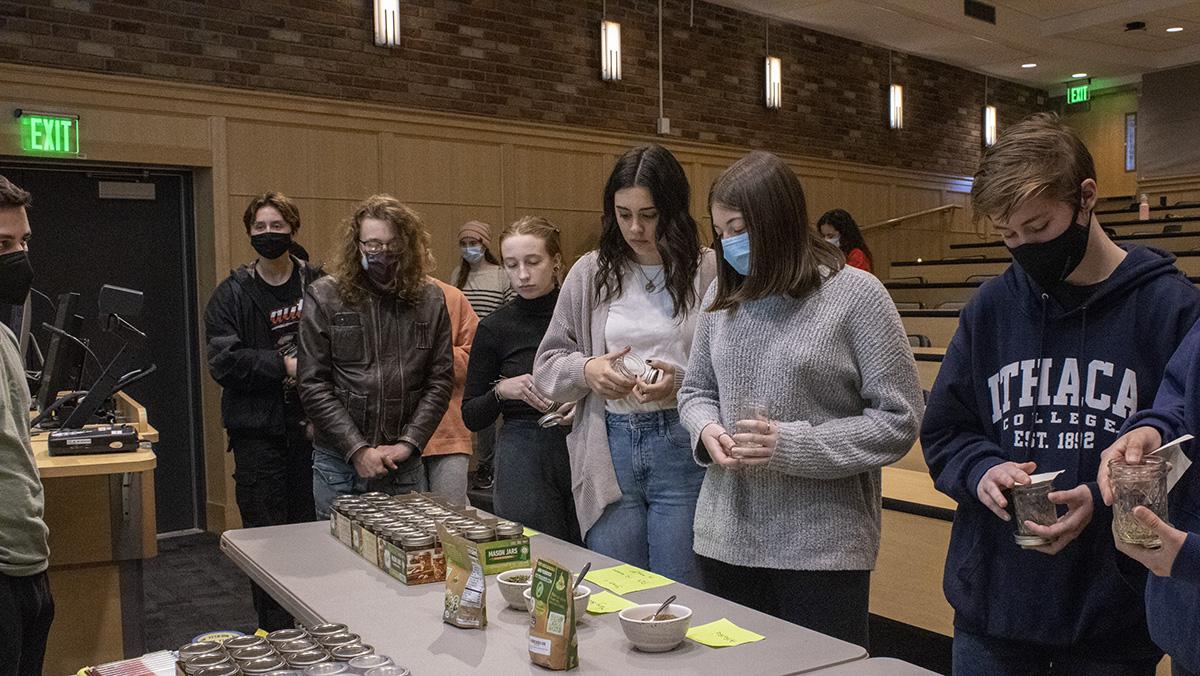 A table at the front of an auditorium is filled with boxes full of mason jars, bags of seeds, and patches of neon green. Anticipation fades as Benjamin Berkowitz, the club founder, brings the meeting to a start by delivering a brief but informative presentation to introduce the new club.

On April 17, the Grow IC club made its debut with its first general meeting in Textor Hall. The meeting was open to the entire campus community, providing those in attendance  the opportunity to create do-it-yourself (DIY) sprouting jars. Each person was able to create the jar and take it home with them.

After the opening presentation, Berkowitz explained to the crowd how to build a sprouting jar and the line quickly formed behind the table. Sprouting jars are made by filling a mason jar with one to two spoonfuls of seeds, adding water to the jar, then placing a mesh fabric over the top. The lid is then screwed on and the jar is ready to go. Every day the water needs to be drained from the jar, the seeds swished around, and new water added. After the sprouts are to the desired size, they are ready to be eaten.

According to Olivia Costa, the club’s treasurer, A small amount of sprouts goes a long way. “Two ounces of these sprouts has about twenty-two grams of protein,” said Costa.

Berkowitz said he came up with the idea for the club after watching a VOX video of seed bombing. “I love history and education videos,” said Berkowitz. “Seed bombing was done by activists in history. They would throw dirt filled with seeds into abandoned lots and eventually gardens would bloom in the area.”

Anne Stork, one of the faculty advisors for the club, said there has historically been a gardening club on campus, though lack of leadership has been a consistent issue.

“Lots of people want to be in a club but not many want to be in charge,” Stork said. “At one point the gardening club was made up of over twenty people.”

When the club came to an end after loss of leadership. Berkowitz saw the need for a nature-oriented club and founded Grow IC.

Berkowitz described the creation of the club as a long, dwelling process.

“It was a lot of work,” said Berkowitz. “I had to write the constitution, get advisors, find members for the e-board, and learn more about the gardens myself.”

The club received its approval at the start of the semester which meant that the funding for the year had been missed. Berkowitz said it was difficult to get supplies because of this. “Getting supplies for this event took about a month and a half,” said Berkowitz. “We have a limited amount of supplies for the DIY activity because of spending limits.”

Grow IC is meant to bridge the gap between the environment and the Ithaca College campus.

“I feel like we could be better about being more kind to natural lands and gardens,” said Berkowitz. “There are gardens on campus, but many students do not know about them.”

Stork said that when Berkowitz proposed the idea for the club to her, he did not know that there was a garden on campus. The club’s garden will take a few rows from the already established garden as well as creating new rows. The garden on campus is mainly used for gardening classes. This club intends to change that and make the garden more welcoming to everyone.

“The gardens are hidden in plain sight, but they are not meant to be hidden,” said Stork. “The most important thing is to empower the students.”

The club is searching for individuals who will be staying in Ithaca over the summer who would like to help look after and maintain the gardens. The club’s bylaws state that “Donating time and community service is important for the club.”

Stork said regenerative agriculture is practiced in the garden. This includes no tilling, plant covered crops, using tarping, and lots of plant diversity.

“We try to support a diverse habit in the garden, no pesticides or fertilizers,” said Stork. “All organic.”

Berkowitz envisions the gardens eventually being able to help grow food for the dining halls in the future. A future partnership with Cornell botanical gardens is also in the vision of Berkowitz.

This new club aims to bring new people into the gardens and create a nature enthusiastic community at the college. “I hope this means new people are excited about gardening,” said Stork. “I just know there’s tons of interest.”

The club intends to bridge the gap between nature and the community, building awareness of the environment onto campus.

“I want to grow plants, but also the [Ithaca College] community,” said Berkowitz. “I want to feel closer to nature.”