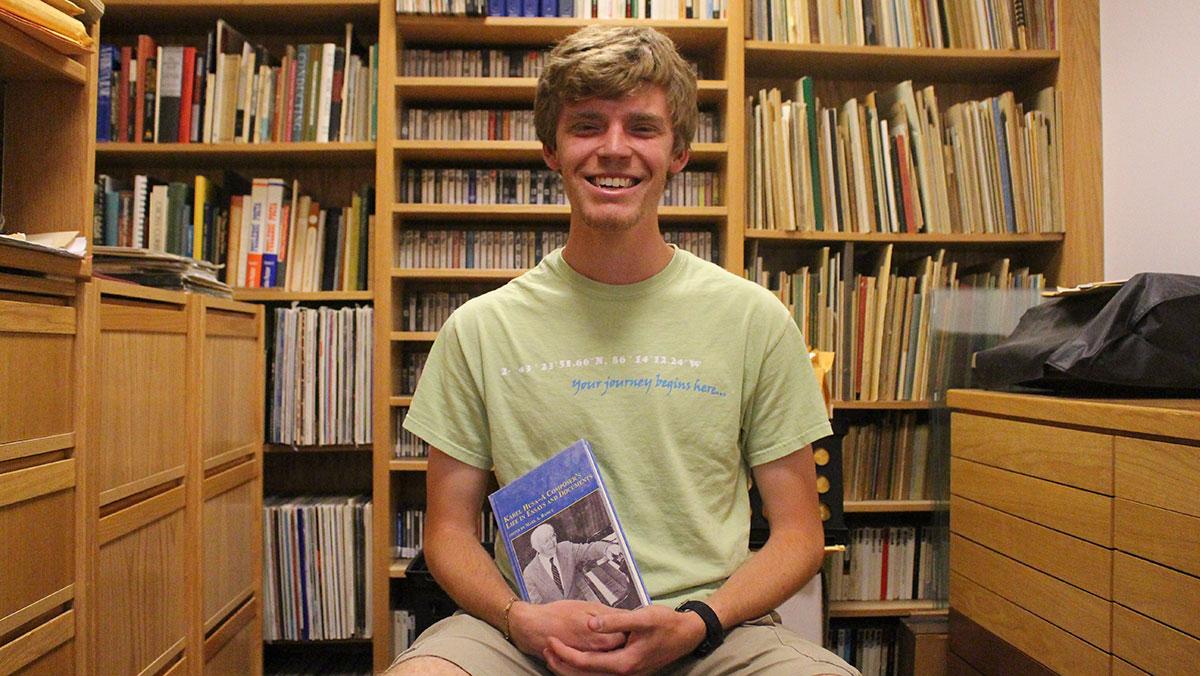 In a tiny, tall room in the James J. Whalen Center for Music, senior Stephen Gomez spent the summer sitting on an uncomfortable stool, analyzing a single piece of music.

The piece, called “Landscapes,” was written by Karel Husa, an internationally renowned composer who won the Pulitzer Prize for Music in 1969 and was an Ithaca College faculty member from 1967 to 1986. Using materials from the school’s expansive Husa archive, Gomez researched the compositional history of “Landscapes.”

Gomez’s work will come to fruition in the form of a new exhibit for the music school’s Karel Husa Gallery, opening Sept. 2. The exhibit will offer an in-depth exploration of the piece, including original scores, programs from performances and letters Husa wrote while he was composing.

Mark Radice, professor of music theory, history and composition and curator of the Karel Husa archive in the music school, said the gallery was added in 2000 as part of the most recent addition to the Center for Music. The space has held other student projects in addition to general exhibits displaying different parts of the Husa archive’s vast collection, which was donated to the college by Husa in 2000.

Gomez said his exhibit will remain on display at least through the end of this semester and most likely for the remainder of the year. He said he hopes the exhibit will educate students not only about the piece but about Husa’s significance as a composer.

“He’s not very well-known, but he’s well-known in his world,” Gomez said. “I hope that this kind of gets his name out. Even me, as a music student, I didn’t really know much about him until I started doing this.”

Husa wrote “Landscapes” in 1977 while he was a professor at the college. It was commissioned by the Western Brass Quintet to celebrate America’s bicentennial, but Husa did not finish it in time for the celebration. The piece is typical of Husa’s work, which is characterized by its atonal quality, meaning there isn’t a dominant melodic line. However, Gomez said if you listen closely, you can hear snippets of a melody.

“He blends old traditions with the new. Even though there’s no melody in here, there are some points that sort of sound melodic,” Gomez said. “His music isn’t tonal, but there are still points where he hints at tonality. He uses old techniques, but he breaks all the rules.”

Though Gomez consulted briefly with the composer, who is now 94 years old, Husa said he allowed Gomez to form his own opinion about the work. Husa found Gomez’s analysis of “Landscapes” to be excellent and said he is grateful for the time and space being dedicated to it.

“It is nice to know when young musicians are interested in what I write and also when they hopefully play my music,” Husa said.

Gomez agreed that while he didn’t talk to Husa extensively, he did feel like he was getting to know Husa better simply by listening to his music, reading his letters and analyzing his life.

“First of all, his music says a lot about how much time he puts into this and how much he loves it,” he said. “But also, in all his letters, the way that people talk to him and the way that he responds helped me get to know his personality. He’s extremely kind, and he was kind to me. I mean, he’s 94 years old, and he was responding to my emails faster than I responded to him.”

Radice said the exhibit will hopefully give music students the opportunity to learn more about contemporary music.

“Most of our incoming students are used to playing more traditional things,” Radice said. “Particularly, it’s good exposure to work by a living composer, particularly one that has specific affiliations with Ithaca College, who is internationally renowned for his work.”

Gomez’s work was funded by the Dana Endowment Foundation and Internship Program at Ithaca College, a program through the Office of Student Financial Services that awards students with research grants. He said he wants to bring awareness to the benefits of independent research as well as to Husa.

“I hope when people come to my talk, they’ll learn about the value of independent research, and I can teach people the value of doing things on their own,” he said. “It’s difficult at first when you just dive right in, but that’s the best way to learn. That’s something for everybody, not just music students.”