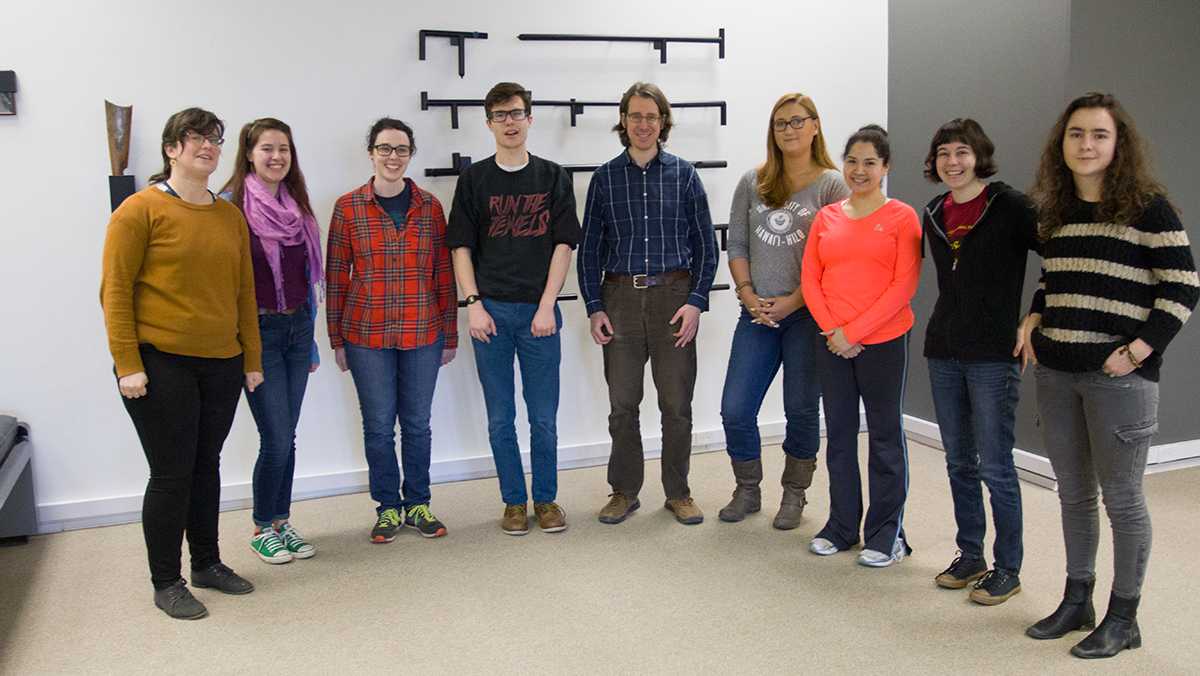 Sam Fuller/The Ithacan
The Complaints Choir, pictured above, is a new music exhibition organized by the Handwerker Gallery, in which members and non-members are invited to submit their complaints and have them be turned into song.
By Silas White — Staff Writer
Published: February 3, 2016

With the fall protests and no confidence vote last semester at Ithaca College and the presidential election on the horizon, the Handwerker Gallery is presenting a Complaints Choir, a music exhibition where people can get together and voice their complaints, regardless of topic or severity.

The culminating choir performance will coincide with the opening reception of the exhibition “NO/GOOD PLACE,” which will run from March 23 to April 22 and will focus on the topics of utopia and dystopia. The Complaints Choir is about utopia, as it is a way to try to see what things about the world could be made better. Complaints can be submitted by anyone, even those not in the choir. The lyrics will be written based on complaints by the choir members and others, and then will be put to music. Anyone, be they students, faculty or others from the Ithaca community, are welcome to join the choir.

IC’s Complaints Choir is part of a larger international art project conceived by Finnish artists Tellervo Kalleinen and Oliver Kochta-Kalleinen. The name Complaints Choir itself is a translation from the Finnish word, “Valituskuoro.” The first Complaints Choir took place in the United Kingdom in 2005, and the universal nature of complaining has led to the conception of 140 of these social projects internationally in cities like Tokyo, Singapore and Chicago.

Mara Baldwin, director of the Handwerker Gallery, explained the intent behind organizing the choir.

“Although the piece definitely has this crispy underbelly of dissidence, it’s really about bringing people together over shared experiences and shared pain,” she said. “Even if they don’t share it, they understand and empathize with it.”

Although the idea for the exhibit had been floating around for a few years, the student protests last fall made this semester seem like an appropriate time to execute it, Baldwin said.

“One person doesn’t have to have the onus of being the complainer because everyone is singing their complaint,” Baldwin said. “It’s sort of this democratic shape of shared responsibility, especially of grievances.”

Paul Wilson, curator of the gallery, said he expects there will be a mix of large and small complaints.

“Sometimes food in the dining hall at a particular moment — that’s the worst thing in the world for you. But at another time, you might have a bigger perspective and think about racism and economic inequality or military conflicts,” he said.

Wilson also said while complaining usually has a negative connotation, that’s not the way he sees it.

“One person starts complaining, and then another person and another person, and it’s sort of cathartic in a way,” he said. “You feel a little better, but you might feel worse. The idea is to channel that negative energy into something interesting and constructive.”

While a few of the other complaints choirs around the world have just involved singing and a piano accompaniment, composer Duncan Krummel, a junior composition and voice major, wants to bring other musical instruments into the mix.

“I’m really hoping there are musicians who sign up for the group itself, even if they aren’t classically trained,” he said.

Krummel is responsible for taking all of the complaints and arranging them musically so that they may be sung. Because the group is composed of all kinds of people, not just those with training, Krummel hopes to keep the music lighthearted and simple.

“Part of the lightheartedness comes from the way the complaints choir has been done before. We could depart from that model, but I don’t think that’s the smartest thing to do,” Krummel said.

The end goal is to create a sound that’s distinctly Ithacan. Krummel emphasized that he wanted it to sound local, and Baldwin specified that everyone involved is from Ithaca.

“We’re using a local composer, a local film crew, a local conductor, and everyone in the choir is also local. So it’s entirely generated just using the people who live here right now,” Baldwin said.

Because of the events from last fall, Baldwin and Krummel said they hope complaints specific to Ithaca will be heard.

Krummel said he also hopes to reflect the styles of music that can be heard around town.

“Every Tuesday night, down at one of The Commons bars, there’s a session that plays Irish folk music. Things like that might influence our decision on what the music will sound like,” he said.

The idea of a complaints choir fitting in with the theme of utopia might sound counterintuitive, but Wilson said he sees it as a way of enacting positive change in the world.

“The idea behind any complaint is you complain because you think the world could be better,” Wilson said.

To join or submit a complaint, email iccomplaintschoir@gmail.com. The sign-up deadline is Feb. 8. The first organizational meeting will be held from 6–7:30 p.m. Feb. 10 in the Handwerker Gallery.