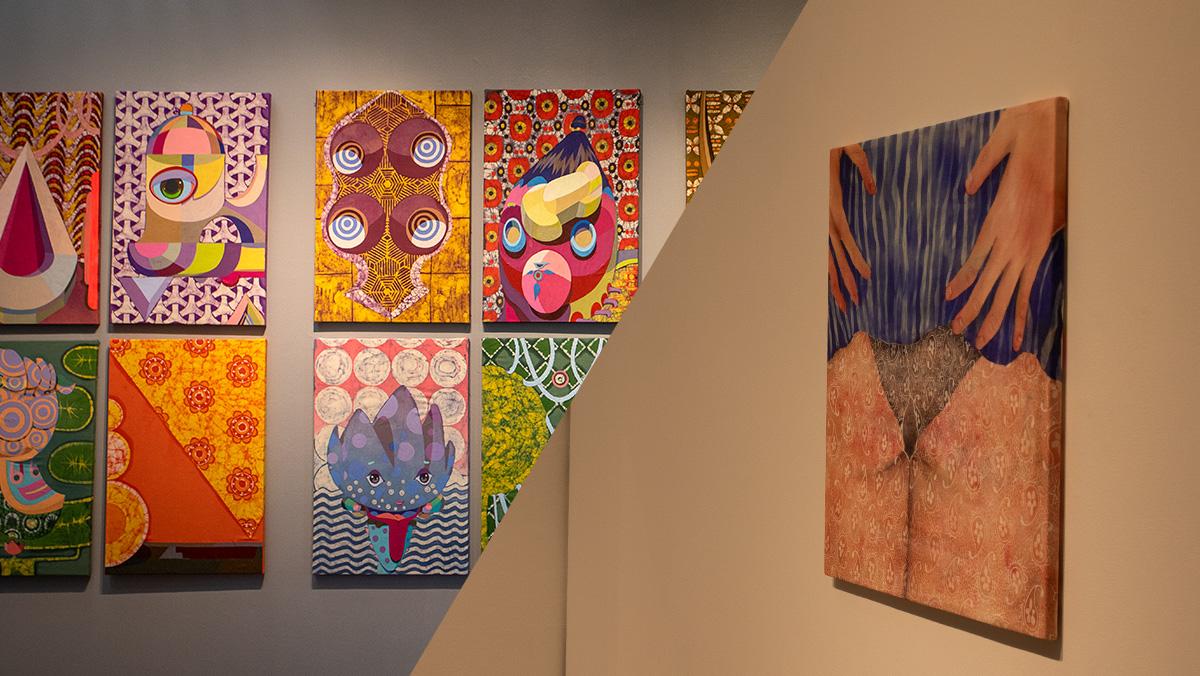 Below the Ithaca College Library, on the first floor of the Gannett Center, holds a small, comfortable art gallery called the Handwerker Gallery. Two shows currently inhabit the walls of the room with vibrant colors and bold shapes on one side and delicate portraits of the human body on the other.

From Aug. 25–Oct. 12, Toby Barnes and Katarina Riesing’s art will be shown in the gallery. Barnes’ show is entitled “Batik Futuriste!” and Riesing’s is “Well Worn.” Although both shows seem very different, Barnes and Riesing both use a process called batik to create their art. The batik technique is when you use a hot wax to block out and contain colored dyes on a surface. The painting then gets steamed for four hours so that the dyes can set and the batik wax melts away.

Paul Nicholson, director of the Handwerker Gallery, said he works to make the gallery function as a library by having a diverse collection of paintings.

“When you go into a library, you never know what new information you’ll be exposed to and what new ideas you’ll have when you walk out,” Nicholson said. “Someone pours all of their energy into an exhibition and you come out with their condensed knowledge.”

Barnes’ art takes up the right side of the room with flashy colors and intricate designs and patterns, almost mimicking a video game. Many of the paintings are abstract, with a few characters and faces on both small and large canvases. Barnes said he likes to bring lines, circles and dots together in a way that creates life.

Barnes said he has been creating art since he was young and went on to go to high school for art at The New World School of the Arts in Miami. He currently works as a professional artist and shows his work in college galleries and museums.

Barnes found his inspiration for these pieces initially from a show in New York City done by The Asia Society entitled “Contemporary Art in Asia: Traditions/Tension.” The show illustrated pieces from urban centers in Asia.

Barnes said that his art is inspired by merchants who brought textiles to Africa to trade, and at some point in time, the Dutch started printing them instead of using the traditional handcrafted ways.

“Talking to Barnes, I learned that a lot of African cloth is based on Indonesian patterns,” Nicholson said. “So you sort of see something and might say, ‘oh, that’s a traditional African design.’ In some cases, it may be, but in some cases, it may be influenced by the cloths that were traded by the Dutch to Africa.”

Barnes said he realized that there was no separation between the traditional and the modern, the new and the old within art styles, and explores that in his pieces. He illustrates the old art style from Southeast Asia with the new, contemporary shapes from today, like anime.

On Riesing’s side, there are paintings of skin folds, crotches, backs with moles, or scars.

She uses neutral colors, as well as lace and embroidery carefully placed onto the canvas. After Riesing uses the batik process, she goes in and adds the lace onto the paintings, which she said is her favorite part.

Riesing said she has always been creating art because her parents are both artists and art professors. She said art has always been a constant in her life and pushed her to even teach art at Alfred University’s School of Art and Design in the Foundations and Painting programs.

“At the heart of the work is always the figure, most often self-portraiture,” Riesing said. “I enjoy the dualities housed within the body; that they can be simultaneously sexy and grotesque, awkward, funny, sweet and uncomfortable.”

Riesing said because she paints body parts, many people can become uncomfortable by them. Riesing mostly paints her own body and said that by zooming in and breaking her own body down into shapes, it allows for a different perspective.

“Bodies are complicated,” Riesing said. “When I am conceiving new works, I am thinking about the tradition of painting the nude, particularly the female nude and all of the stereotypical beauty standards embedded in that. There is a sense of body realness that I’m trying to achieve when I paint.”

Riesing said that through her works, she wants people to be seen, but also to laugh, to cringe and to question.

Dara Engler, associate professor and associate chair of the Department of Art, said that as a figure drawing teacher, she wants to reject the idea that there are unattractive parts of the body by battling with the ideas of beauty and the grotesque. If our culture stopped teaching us that our bodies are grotesque, then we would read these works through a different lens.

“​​I like the idea of taking something society might tell us is uncomfortable or unattractive and laboring over it lovingly with marks and embroidery, using color and light to make it beautifully luminous and layering it with lovely patterns,” Engler said. “Maybe for both the artist and viewer, that makes us love and appreciate our bodies.”

Engler said that by experiencing the Handwerker Gallery, she wants students to rethink, start new dialogues and broaden their approaches to materials and address conceptual goals in more complex ways.

“Exposure to a variety of artists and processes is crucial for student artists,” Engler said. “But art also starts dialogues about important subjects and makes viewers see new perspectives. That is what education and college are all about. The gallery benefits the whole campus.”

Nicholson said that historically, there have been minority voices and topics that have been excluded, and now is an important time to introduce it all.

“Art doesn’t really have a function; it’s not anyone’s job to teach you something about morals or to virtue signal, or be political, or set your values straight,” Nicholson said. “It’s their interpretation of whatever this experience is like. They’re processing it and coming to terms with it. You can come in touch with how other people process things and get exposed to new ideas.”