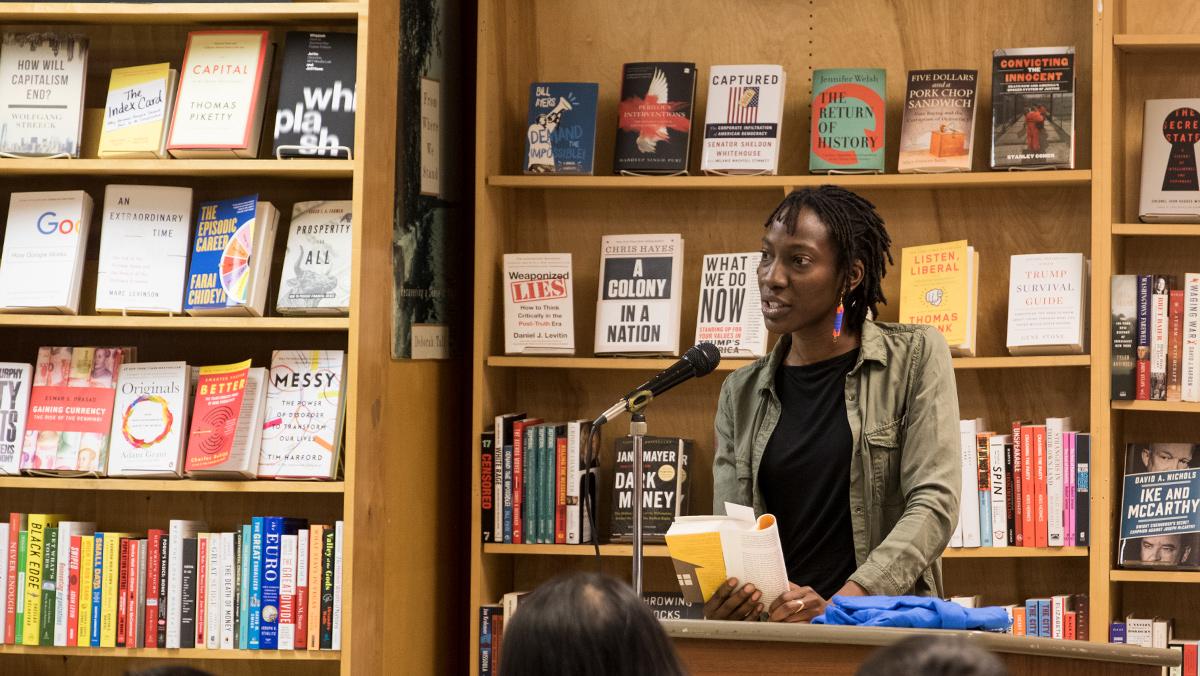 A combination of eight up-and-coming poets, novelists, essayists, playwrights and screenwriters gathered in the nooks and crannies of Buffalo Street Books, Ithaca’s independent bookstore, April 5 to read excerpts of their works to the Ithaca community.

The Short Short was the kickoff event of the Ithaca College New Voices Literary Festival, a three-day writing festival now in its fifth year, hosted by the writing and English departments at Ithaca College. Each year, assistant professors Eleanor Henderson and Chris Holmes select new writers from multiple genres and disciplines, including poetry, plays, essays and screenplays, and give students the opportunity to host and work alongside the writers.

After student guides introduced each writer, a crowd of about 60 listened intently to topics ranging from the mystical poetry of underwater mermaids from Lauren Slaughter to the satirical, realistic fiction about blatant racism from novelist Yewande Omatoso.

Henderson described The Short Short as a marathon: The two-hour event kept flowing until all the readers finished sharing their stories.

“It’s really magical to hear all the writers come together in a chorus,” she said. “They’ve just met each other, and they’re getting to know each other, and suddenly, a magical chemistry takes place when you have that many writers together.”

Henderson said she and Holmes make the conscious effort to select writers from different backgrounds and genres for the festival each year.

“Every year, we say, ‘This is going to be the best festival yet,’” Henderson said after the kickoff event. “I think I’m having that feeling right now.”

At noon on April 6, a panel held in the Dorothy D. and Roy H. Park Center for Business and Sustainable Enterprise will discuss how writing has shifted under President Donald Trump. The Handwerker Gallery will host two additional events, Writing in and of the South at 2:30 p.m., and a reading event similar to The Short Short at 5 p.m.

At 11 a.m. on April 7, Omotoso, Chanelle Benz, Chaitali Sen and poet Debora Kuan will discuss gender and sexuality in the Handwerker Gallery. All the events are free and open to the public.

Claire Gleitman, professor in the English department and director for the playwright series of the festival, said Holmes and Henderson did an incredible job of getting students in the festival.

“It provides students with the opportunity to interact with notable folks and tell them that they can conceivably [get into the industry], too,” she said.

“He’s able to craft pictures, images and memories in such a clear … way that we almost remember from our childhood,” Vogelman said.

An intimate connection is formed between student writers and Buffalo Street Books, Henderson said, because the New Voices Festival always kicks off at the bookstore.

“We start the event at … the bookstore because we want it to be a community event that brings people from Cornell University and Syracuse University and the greater community of Ithaca to listen to some literature,” Henderson said.

The festival concludes at 6:30 p.m. April 7 at the Handwerker Gallery with a stage reading of playwright Nick Gandiello’s play “The Blameless,” a story that follows a family coping with death. Gleitman said the cast of the performance features staff and students and faculty members from On The Verge, a program at the college that gives students the opportunity to participate in dramatic readings.

Besides Gandiello, this year’s event will feature readings from Kuan, Omotoso and more.

For more information about the festival, go to https://www.ithacanewvoicesfestival.com.

On the Verge takes staged reading on the road