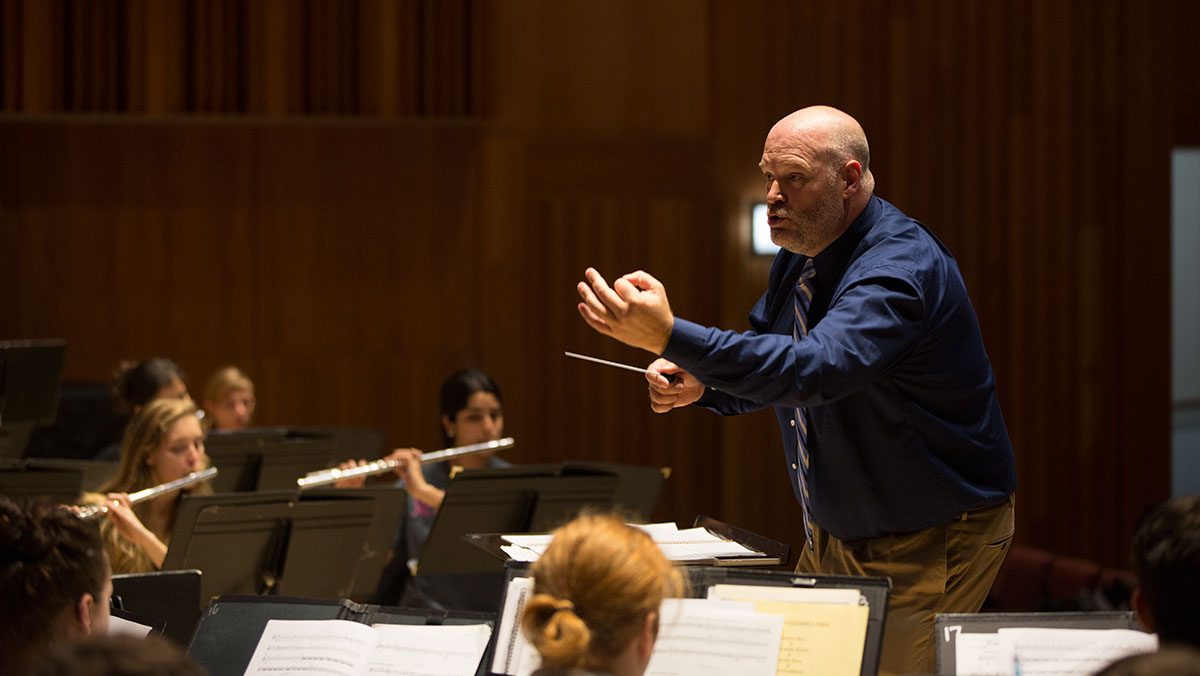 Students often choose their college based on which professors teach there. Ithaca College has always been renowned for its music program, and as a result, the college attracts knowledgeable professors and eager students who wish to pursue music.

Last year marked the departure of three established professors from the School of Music. Now, of the four major bands on campus, three have new directors: Concert Band, Symphonic Band and Wind Ensemble.

Matthew Inkster, a visiting professor from West Liberty University, is the current director for the college’s Symphonic Band as well as Campus Band. Inkster said he feels a responsibility to continue the legacy of great concert bands at the college.

“From last year there were three longtime professors in the band area that either retired or moved to other positions around the country, so it’s a terrific honor honestly for me to be here and be a steward for the wind band tradition here,” Inkster said.

Also new to the music school is Jason Silveira ’02, currently conducting Concert Band. For the concert band’s upcoming performance Oct. 5, Silveira selected the theme “Western Band,” with all of the selected pieces reflecting that theme.

“Each one of the four pieces has subtle references to the theme, Western,” he said. “In the case of our first piece, ‘Continental Overture,’ it refers to the Western Hemisphere. That piece premiered in California, so western United States, and there are also some western European influences.”

Concert Band will also play “Desi,” a tribute to Desi Arnaz; “Redwoods,” a tone poem about the Redwood forest; and “Give Us This Day,” a piece influenced by Bach chorals.

One of the challenges of conducting a band is interpreting the music the composer has written, Silveira said.

While it is important to reach the audience, Silveira also stressed the importance of reaching the students.

“Sometimes when we’re performing music, we get so wrapped up in our own part, our own technique, our own instrument that we shut our ears off. One of the things that I encourage my students to do is to come to rehearsal with their ears on and listen to everyone else,” Silveira said. “You come to rehearsal not to practice your part but to listen to everyone else’s part.”

Matthew Marsit is a visiting professor from Dartmouth College. Marsit is serving as the conductor of the Wind Ensemble for the duration of the fall semester.

For its upcoming performance, the Wind Ensemble will be playing international pieces from New Zealand, Belgium, Japan and Spain. Marsit said he believes the international focus will help students achieve “a wider picture” in terms of their growth.

Marsit called the Wind Ensemble the “premiere group on campus,” as it is composed of graduate students and upperclassmen, but that doesn’t mean they don’t have room to grow.

“The initial challenge is for us to get to know one another and operate as an ensemble. The ensemble has to work as a machine, as one,” Marsit said. “The job of the conductor is to work in beautiful harmony with the ensemble, and now several weeks in I believe we have achieved that.”