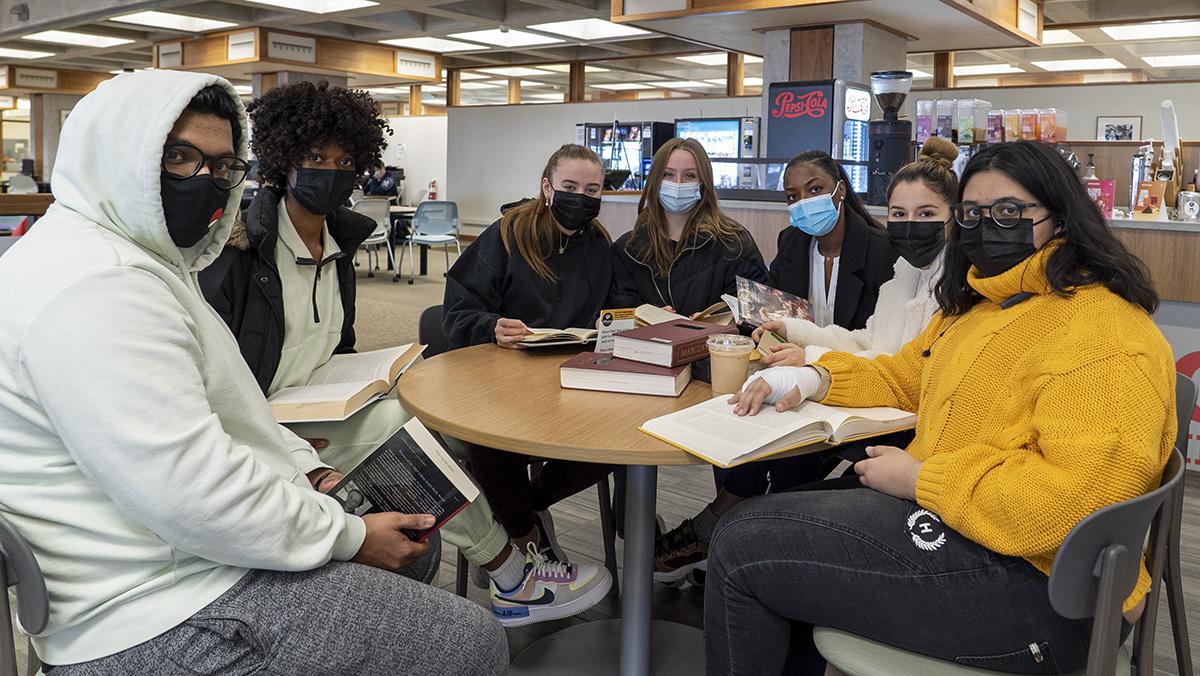 Niko Stycos/The Ithacan
The newly-founded IC Book Club meets once every two weeks in the Ithaca Falls room of the Campus Center. Their first read was "Pride and Prejudice."
By Elijah de Castro — Assistant Life and Culture Editor
Published: December 1, 2021

“I love him. Indeed he has no improper pride. He is perfectly amiable. You do not know what he really is; then pray do not pain me by speaking of him in such terms.”

These iconic lines, spoken by Keira Kneightly as Elizabeth Bennett in the 2005 adaptation of Jane Austen’s “Pride and Prejudice,” had tears rolling from the eyes of members of the newly-founded IC Book Club. The club meets once every two weeks in the Ithaca Falls room of the Campus Center. After spending a month reading Austen’s classic novel of manners — which tells the story of Bennett navigating the pressures of 19th century marriage — the 15 members of the group reconvened Nov. 30 to watch the film together.

Freshman Jennifer Odum, president of the IC Book Club, said she decided to form the club when she arrived at the college and saw that there were no book clubs. Odum, who is from Nigeria, said she started her own book club at home for working people who were looking for an escape in reading. Odum also said she was staying in Dubai and became a bigger fan of book clubs when she joined one there.

“When I got here I quickly searched for a book club to join and I didn’t find that anywhere,” Odum said. “I was like ‘I need this, it keeps me grounded.’ My aim was to start one next semester, but once I got the hang of what the semester was like, I was like ‘I’m gonna start it this semester.’”

Odum said the goal of the book club is to have a natural environment around reading that encourages people to share their perspectives on commonly read literature. When deciding what book the members should read first, Odum held a vote for club members to decide. “Pride and Prejudice” won, while the other books to vote on were James Baldwin’s “If Beale Street Could Talk,” Gillian Flynn’s “Gone Girl” and Kevin Kwan’s “Crazy Rich Asians.”

“The idea is to keep it very organic, very playful and flexible,” Odum said. “I’m hoping to come up with more events that will make people be more interested in reading and not just seeing it as a very tedious task.”

Sophomore Cate Middleton is a member of the IC Book Club and said she joined after a friend connected her to Odum. Middleton said she was thrilled to read “Pride and Prejudice” again and discuss it with members of the club who had different experiences with the book. Middleton said her personal connection to Bennett, the main character of the book, made it an exciting book for her to reread.

“I think the book has created this romance trope,” Middleton said. “Now you can see a million romance movies and read a million books that follow the same pattern, and it’s really cool that this one woman created it … I’ve never been in a book club before. So this is a first for me, but I’m hoping it’ll introduce me to better books that I’ve never read before.”

Odum said for next semester, the club is hoping to read a book by a local author and host them at one of its events to discuss their writing.

Freshman Yash Mohod is the webmaster and treasurer for the IC Book Club. Mohod said he joined the book club as a way to introduce himself to new literature and to meet new people. Mohod said being from India has made it difficult for him to adjust to circles in Western culture and Odum helped him get connected to the club.

“Initially when I came in here I didn’t know many people and Jennifer was one of the first people [who I met],” Mohod said. “I was never a fan of literature before. But then I knew that the stories and the characters do play a part in impacting you as a person or learning something about yourself. But I never had the chance to because I never gave it a chance.”

Mohod said that discussing literature like “Pride and Prejudice” gives him the opportunity to take a break from the technical work he does as a computer science major for deeper conversations.

“I thought this club would be a good way to come out and try to connect with people in a place where I had never been,” Mohod said. “It’s just a good medium to have a conversation about.”